Fear and anger in Canada after Muslim family is killed: ‘How many more people have to die?' 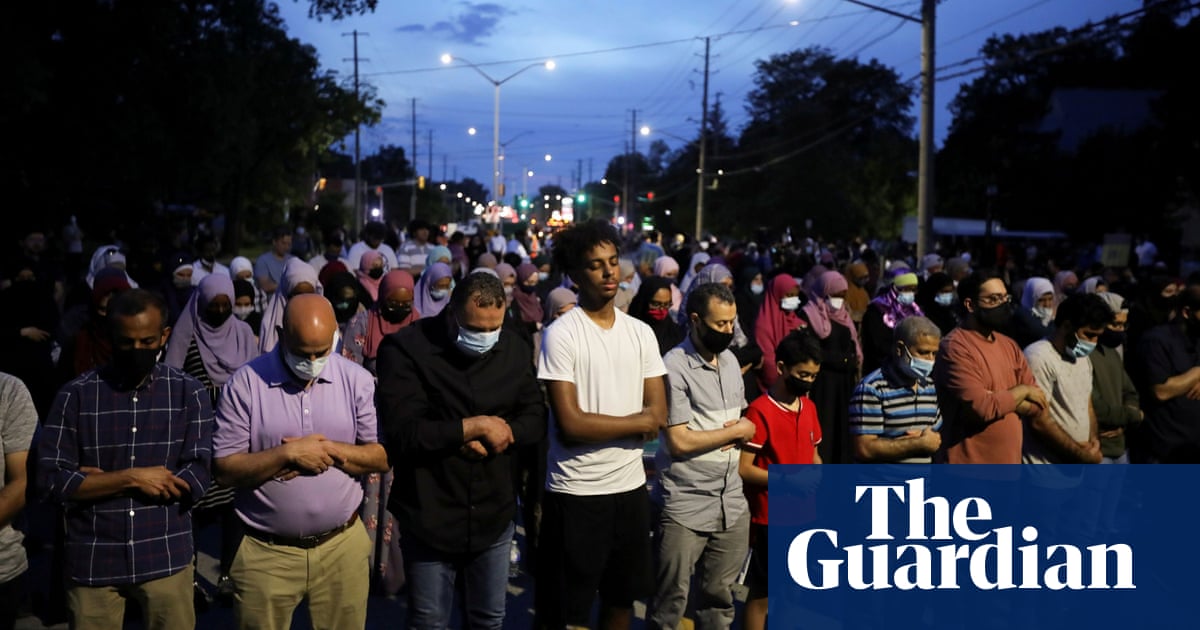 As thousands of people gathered outside Canada’s second-largest mosque in London, Ontario, Reina Persaud was watching her niece and other children chalking brightly-coloured hearts all over the road.

The “pathway of hearts” was a tribute to the Afzaals, a local Muslim family, who every evening would take a walk around the neighbourhood, greeting neighbours and friends – and who were killed on Sunday in what police have described as a premeditated attack motivated by Islamophobia.

Members of three generations of the family died when a 20-year old man ploughed his pickup truck into them: Salman Afzaal, 46, his wife Madiha Salman, 44, their daughter Yumna Afzaal, 15, Salman’s mother, Talat Afzaal, 74. The couple’s son, Fayez, nine, remains in the hospital.

On Tuesday night, crowds of mourners – including Prime Minister Justin Trudeau and the leaders of all of Canada’s political parties – attended the vigil to honour the victims and protest against hate.

Persaud, daughter of a Chinese-Filipino mother and an Indian father, said she was there because she had experienced racism in London all her life and so had all her patients – two of whom were crying in her office earlier in the day. “I’m scared for them," lei disse. “I’m scared because they can’t be who they want to be out of fear.”

She was surrounded by Canadians of all colours and creeds. Sikh men handed out cold water bottles on the hot and humid evening. The blue flag of the Métis Nation soared overhead. A little girl in a printed abaya moved through the crowd holding sign reading: “I am Muslim. I am Proud.”

The vigil started with the Muslim call to prayer, which – for the first time in Canadian history – was aired on national television. A moment of silence was held at 8.40pm, the exact time the Afzaal family was killed during their evening walk.

The suspect, Nathaniel Veltman, has been charged with four counts of first-degree murder and one count of attempted murder.

Sunday’s attack has spread fear and sadness across Muslim and racialized communities – but there is also growing anger at the country’s failure to curb racism and Islamophobia.

“Stories like this shatter people’s utopian image of what Canada is,” said Javeed Sukhera, a psychiatrist and chair of the London police board. “Denialism of racism in Canada is pathological. But how many more people have to die before politicians do something?"

Earlier on Tuesday, Trudeau told Parliament: “This was a terrorist attack, motivated by hatred, in the heart of one of our communities. If anyone thinks racism and hatred don’t exist in this country, I want to say this: How do we explain such violence to a child in a hospital? How can we look families in the eye and say “Islamophobia isn’t real”?

Shortly afterwards, tuttavia, he detto reporters that a law in Quebec prohibiting some public servants from wearing religious symbols such as the hijab doesn’t foster hate and discrimination.

At the vigil, the prime minister was met by a muted response, but other prominent politicians were greeted with open hostility

Conservative leader Erin O’Toole – who in 2017 joined 85 members of his party to vote against a non-binding motion condemning “Islamophobia and all forms of systemic racism and religious discrimination” – and Ontario’s Conservative Premier Doug Ford – who before the organization was banned was photographed with members of the Proud Boys – were both booed by the crowd.

“Canada has always seen itself as a multicultural society and we’ve conveyed that to the world but if this level of hate is happening here then clearly the environment doesn’t match the words,” said Mohammed Hashim, executive director of the Canadian Race Relations Foundation who attended the vigil. “Policymakers need to accept responsibility that this is an environment they have allowed to exist in Canada, whether it’s on the streets or online.”

In London, a city of 400,000 home to close to 40,000 Muslims, many residents said that racist micro-aggressions were an everyday part of life, but until now, none had ever felt unsafe to walk the streets.

The Afzaals moved to the city from Pakistan 14 years ago and soon became much-loved members of the local community. Salman was a physiotherapist in elder care. Madiha was a writer and civil engineer on the path to finish her PhD.

Yumna was a painter who already left her legacy at the London Islamic School: a floor-to-ceiling space-themed mural with the words “shoot for the moon, even if you miss, you’ll land among the stars”. Talat was an artist and a schoolteacher, known as the “pillar” of the family who cherished their daily walks together.

After the Afzaal family’s deaths, Jeff Bennett, a former Ontario Progressive Conservative candidate and London resident, sat down to write an apology for failing to do more to confront the racism he had witnessed. In a Facebook post, Bennett wrote the attacker “was raised in a racist city that pretends it isn’t”.

“I had an intense realization that horrific events happen because we allow [racism] to go on for too long,” he said in an interview. “Nobody wants to admit they’ve done wrong or hold themselves accountable, but we have to. We’re all contributing to systemic racism. Just as we point to the good things in the city, we also have to shine a light on what we’re not doing well. And that applies to every city in Canada.”