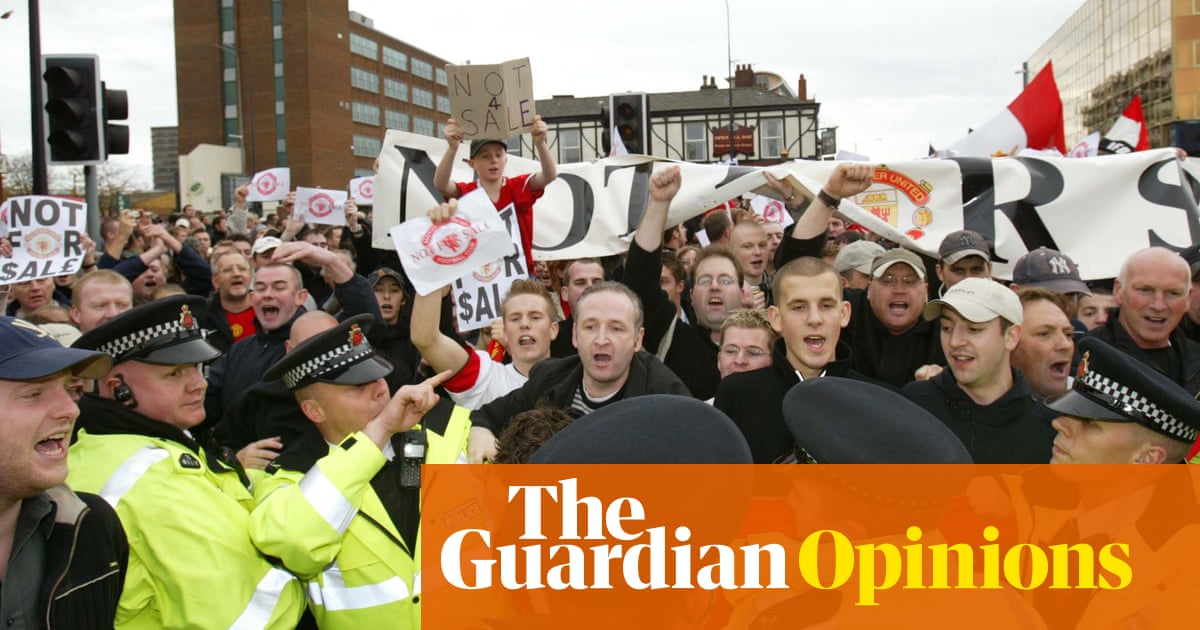 In 2005, a generation ago now, when supporters were first protesting against the pending takeover of Manchester United by the Glazer family, the approach of the football authorities was mostly to brush off their concerns. There seemed to be a sense among the blazers in the Football Association and the Premier League suits that the fans just did not really understand the mystique of a corporate takeover, or the excitements of having “investors” from America.

But football supporters are people, citizens, and they understood it very well indeed. The United protesters included corporate lawyers and accountants, and political activists who take heartfelt pride in Manchester’s radical traditions, and they patiently explained it. This was a leveraged buyout: the Glazers would not put a cent into United, but would want fortunes out. The family was borrowing most of the money – £525m, some at eye-watering interest, from the bank JP Morgan – then they would make the club and its supporters pay the debt off and provide a luxury living. The Premier League, which should have done so much more to protect football’s soul in the moneyed era, seemed smug and complacent, but to passionate, smart people in the Old Trafford stands, the Glazers and their money tricks were a monstrous wrong. Sixteen years later, for all their half-hearted efforts from across the Atlantic to change perceptions, clearly they still are.

One of the arguments advanced by the Premier League’s executive as they relished their business-ification of football was that such leveraged buyouts were the way of modern takeovers in all industries, including of high-street chains. The fans replied then as they can with vindication now, pointing to the collapse of many great businesses: well, look at the high street, the debt-loading doesn’t do much good there either.

In its statement condemning the people who protested at Old Trafford on Sunday and – for all the world to see – stopped United’s match against Liverpool, the Premier League said “fans have many channels by which to make their views known”. So it is sad that the league, riven now by the “big six” and calling for the government to introduce legislation, did not listen to fans’ views a little bit more over the years, and instead ruthlessly fought the FA and progressive ideas for independent regulation.

Many supporters have always believed the throwing of our clubs to the corporate takeover market was wrong for football culture, and have come to covet the German model, by which supporters’ associations have a 50%+1, controlling vote over clubs’ crucial decisions. The justification for the mega-commercial English version is that it has brought great investment, and created a financial dominance now seen in the possibility that all four finalists in this season’s Champions League and Europa League could be Premier League “big six” clubs.

For many, the Champions League semi-final between United’s formerly long-struggling rivals City, and Paris Saint-Germain, is anathema too: representing Abu Dhabi wealth versus Qatari, statements of Gulf emirates’ oil and gas power compared with the early industrial countries’ economic hangovers. But there is a fundamental difference between those models and the Glazers’, not lost on the protesting United supporters.

At City, Sheikh Mansour’s executives, including the chairman Khaldoon al-Mubarak, are in their day jobs senior political and business figures responsible for the strategic direction of Abu Dhabi, working for Mansour’s brother, the de facto ruler, crown prince Sheikh Mohamed. They always fixated on supreme success but their Premier League project attracts vast media profile and they also needed it to reflect well on their country and its ruling family. They did listen and learn, and they understood very quickly the sentimental loyalties of City supporters and the best, basic values on which football likes to pride itself. Joining the dash for the European Super League was a rare major misstep in football by the regime.

Hence disgruntled United fans look across to the club Sir Alex Ferguson airily dismissed as noisy neighbours, and see not only the world’s greatest coach and a dream team reproduced from the Barcelona football system at its best, but a towering academy, and landmark investment in the neighbouring community that has struggled for 40 years since many of Manchester’s industries closed down.

At United, as the supporters predicted in 2005 and still emblazon on banners, the Glazers have put nothing in during 16 years of ownership, but their corporate machinations have drained out more than £1bn. Manchester United plc, re-registered in the Cayman Islands tax haven in 2012 and floated on the New York stock exchange, has always been an investment for them personally. The interest on £236m “payment in kind” (pik) loans taken on for the takeover had reached 16.25% five years later; £67m had gone out of the club in interest alone in 2009-10, when they refinanced, costing the club another lump of multimillion-pound fees.

The cash the club have started to provide for the five Glazer brothers and one sister is also far from cheap. In 2015 United announced that shareholders would be paid a dividend every year, and they have been: approaching £100m paid to the six Glazer siblings since then. In the most recent financial year, to 30 June 2020, which includes the early months of the Covid-19 shutdown, United’s revenues fell by £118m, and the club made a loss of £23m – but still paid the dividend, itself amounting to £23m, without which the club would have broken even.

Ferguson’s genius got them through on the field in the early years when money was pouring out, but the Glazers have serially fumbled the challenge of replacing him. They appointed to run the club Ed Woodward, the banker at JP Morgan who had structured the takeover for them, including the high-interest piks, and they remunerated him extraordinarily well too.

But the European Super League breakaway fiasco, pushed in England by Joel Glazer with John Henry, the principal US owner of Liverpool, seems to have been too much even for Woodward to stomach, precipitating his departure. He remains a personable, professional chap, and it must have been deeply uncomfortable for him to hear Uefa’s president, Aleksander Ceferin, condemn him as one of the “snakes and liars” who sneaked into the Super League two days after agreeing the restructure to the Champions League.

One US investor in football told me some years ago that he genuinely struggled to understand the fans’ hostility to the Glazers, because what they had done was not illegal and was actually very clever. The overriding response to that was to lament again the Premier League failing to protect football and its great clubs from such cleverness, instead appearing to think they were being ever so clever and modern to wave it all through.