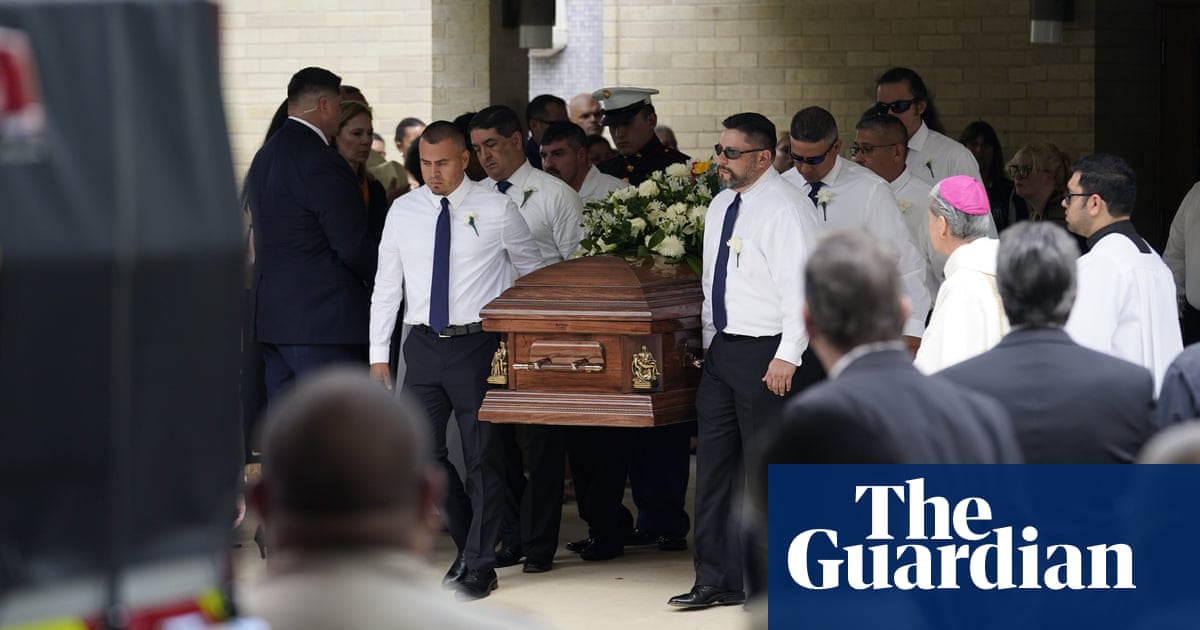 Mourners gathered on Wednesday at a Catholic church to say goodbye to Robb elementary school teacher Irma Garcia – who died in the shooting at the Uvalde, Texas, school – and her husband, Joe – who died two days later from a heart attack.

Nineteen children and two teachers – Garcia and her co-teacher, 44-year-old Eva Mireles – were killed on 24 May when an 18-year-old gunman burst into their classroom. The litany of visitations, funerals and burials began on Monday and will continue into mid-June.

At Sacred Heart Catholic church on Wednesday, twin black hearses carrying the coffins of the Garcias arrived in a procession led by police and civilian motorcycle riders. Covered by flowers and white cloths, the two closed caskets were borne by pallbearers past a phalanx of police in uniforms and priests in white robes.

Some sobbed throughout the service in which Archbishop Gustavo García-Siller offered thanks for Irma Garcia’s dedication. He listed the names of the slain schoolchildren several times throughout the homily.

“Because you were there with them," él dijo. “You did what you would have done with your own children. You took care of them until your last breath.”

Irma, 48, was finishing up her 23rd year as a teacher at Robb elementary. In a letter posted on the school’s website at the beginning of the school year, Garcia told her students that she and Joe had four children: a marine, a college student, a high school student and a seventh-grader.

Most of the readings during Wednesday’s service and the homily were in English, with García-Siller offering some words in Spanish.

“We are all hurting," él dijo. “In the midst of so much, por favor, please people need comfort, people need you … Let us all foster a culture of peace.”

Joe, 50, collapsed and died after dropping off flowers at his wife’s memorial. The couple would have been married 25 años después 28 junio. His obituary noted that he and Irma “began their relationship in high school and it flourished into a love that was beautiful and kind”.

El martes por la tarde, hundreds turned out to remember Amerie Jo Garza, a smiling fourth-grader whose funeral mass was the first since the massacre. The funeral for 10-year-old Maite Rodriguez was on Tuesday night.

At Amerie’s funeral, mourner Erika Santiago, her husband and their two children wore purple shirts adorned with images of the victims. She described Amerie as “a nice little girl who smiled a lot”, and who was “so humble and charismatic but full of life”.

Investigators continue to seek answers about how police responded to the shooting, and the US Department of Justice is reviewing law enforcement actions.

The blame for an excruciating delay in killing the gunman – even as parents outside begged police to rush in and panicked children called 911 from inside – was placed on the school district’s police chief, Pete Arredondo. The director of state police last week said Arredondo made the “wrong decision” not to breach the classroom, believing the gunman was barricaded inside and children were not at risk.

El miércoles, Arredondo told CNN that he was talking regularly with investigators from the Texas department of public safety, contradicting claims from state law enforcement that he had stopped cooperating.

Authorities have said the gunman, Salvador Ramos, legally purchased two guns not long before the school attack: an AR-15-style rifle on 17 May and a second rifle on 20 Mayo. He had just turned 18, permitting him to buy the weapons under federal law. Ramos was killed by law enforcement officers.