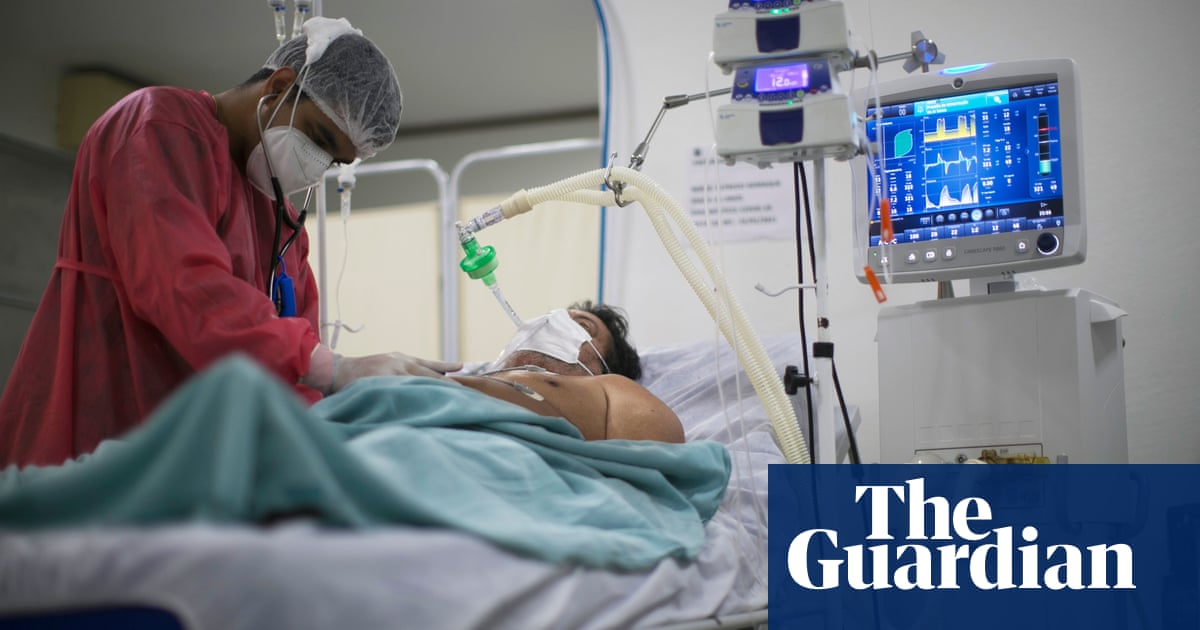 Health experts and lawmakers have warned Brazil is steaming into the darkest days of its coronavirus catastrophe, as fatalities soared to new heights and one prominent politician compared the crisis to an atomic bomb.

Politicians from across the spectrum voiced anger and exasperation at the deteriorating situation on Monday, after Brazil’s weekly average of Covid deaths hit its highest level since the epidemic began last February and hospitals around the country reported being swamped.

According to the newspaper O Globo, intensive care units in 17 of Brazil’s 26 states were near capacity, while six states and the capital Brasília had run out of intensive care beds altogether.

“We are living through one of the worst moments in our history,” said Tasso Jereissati, an influential centre-right politician who is among a group of senators demanding a congressional investigation into president Jair Bolsonaro’s globally condemned handling of the pandemic.

“We’ve lost the war … It’s as if an atomic bomb has landed on Brazil,” Casagrande said, pointing to Brazil’s soaring death toll which, at more than 255,000 people, is the world’s second highest after the US.

Luiz Henrique Mandetta, who was Bolsonaro’s health minister until he was fired last April, told O Globo that Brazil’s failure to launch a rapid vaccination scheme meant the average daily death toll could soon rise to over 2,000.

“I don’t know where this will end … The country is running the risk of becoming one big Manaus,” Mandetta warned in reference to the Amazonian capital which made international headlines in January after hospitals ran out of oxygen because of a Covid surge.

It has now been just over a year since Brazil registered its first official Covid case, on 26 February. Brazil’s first death was recorded in mid-March.

Mandetta, who was fired after challenging Bolsonaro over Covid, has claimed that before leaving government he warned the president the death toll could reach 180,000 before a vaccine was found.

But Bolsonaro, who has trivialized Covid as “a bit of a cold”, ignored those appeals, resisted quarantine measures and, one year into the outbreak, continues to undermine lockdown efforts by disparaging masks and promoting crowded public events.

In December Bolsonaro falsely claimed his country had reached “the tail end of the pandemic”.

Last Friday, as Brazil reported its highest daily number of deaths, Bolsonaro travelled to the northeastern state of Ceará – where the leftwing governor had imposed a Covid curfew – to hold a Trump-style rally at which he railed against such measures before a throng of supporters and claimed people could no longer bear to stay at home.

That appearance sparked outrage among political opponents and fuelled calls for an inquiry into Bolsonaro’s actions.

“In my opinion, what he did here was a crime against public health,” he said.

“It was one of the most irresponsible acts that I’ve ever seen from a Brazilian president. We experienced a tough period of military rule here, which I lived through, but I’ve never seen anything so irresponsible and foolish as what happened here in Ceará.”

Jereissati added: “The president seems to believe that he can behave however he likes without facing any kind of consequences himself. With an inquiry, we hope to show the president that he must be held legally, and even criminally responsible for his actions … These actions have consequences – and they need to have consequences for him too.”

“There is still time to save lives and to pressure the government into changing its behaviour so it doesn’t keep clinging to certain positions just because of dogmatism or pseudo-ideology,” Prates said.

Bolsonaro’s political standing was bolstered last month after candidates he had backed were elected to the presidencies of the Senate and lower house. Analysts believe that is likely to free Bolsonaro from the threat of impeachment, for now at least.

However, the far-right populist is facing mounting public anger over the soaring death toll and its spluttering vaccination drive.

So far just 3.8% of Brazil’s population has been vaccinated with state capitals such as Rio, Salvador, Cuiabá, Porto Alegre and Florianópolis among the cities forced to temporarily suspend imunisation for lack of shots.

Calls for the impeachment of a man critics call “Bozo” can be seen graffitied onto walls across major cities while propaganda hoardings promoting the far-right populist have been vandalised with red paint. Both left and right-wing detractors have taken to the streets in protest in recent weeks.

The outlook appeared bleak in many of Brazil’s states on Monday, as an association of state health secretaries called for an immediate nationwide curfew from 8pm until 6am to curb infections.

“We are facing our worst moment, with the worst president for this moment,” said Jereissati. “It didn’t need [to be like this] at all – on the contrary.”