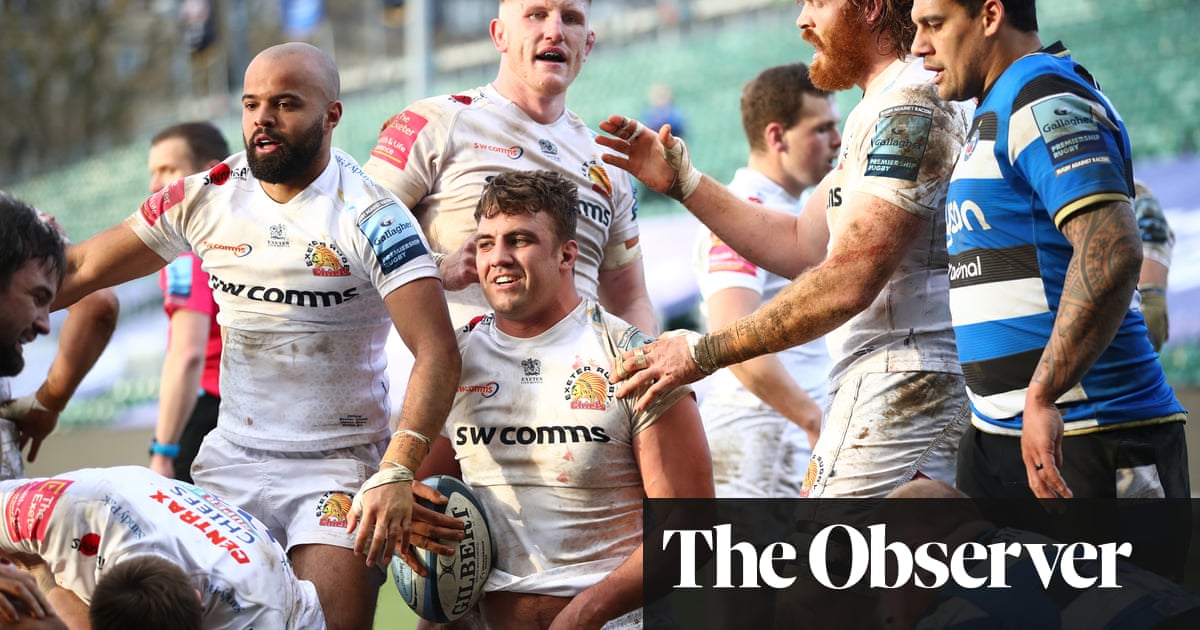 England have yet to find their feet in this year’s Six Nations, so Sam Underhill’s return from injury was timely for Eddie Jones even if it could not prevent Bath from going down to a heavy defeat to Exeter.

Underhill took four minutes to announce himself after a month out with an injury, going low to tackle Alec Hepburn on Bath’s line, letting go of the prop and remaining on his feet before winning a penalty for holding on as he looked to force a turnover.

The Lions head coach Warren Gatland was among the few in attendance and surely would have taken note. He would also have noticed a Wales player he capped, the outside-half Rhys Priestland who in the first 18 minutes extended his Premiership record for consecutive goal-kicks to 35 and created Bath’s opening try with a perfectly weighted cross-kick for Ruaridh McConnochie. He may be a year younger than Johnny Sexton, but Priestland will not be going to South Africa or wherever the Lions tour takes place.

The England head coach Jones would have been monitoring Underhill’s return given his players’ inability to stay on their feet against Wales, but perhaps he should take another look at McConnochie who was among a clutch of Bath players given a taste of Test rugby and then jettisoned. His try came after 11 minutes in the middle of Bath’s best period of the match when they stretched Exeter by moving the ball quickly after contact and avoided being sucked into an arm wrestle.

McConnochie’s try followed runs by Will Muir, Ben Spencer and Josh McNally which took them behind the defence and when Zach Mercer signalled to Priestland to kick high to the corner, the wing rose above Jack Maunder to claim the ball and had the strength to ride Tom O’Flaherty’s tackle.

Priestland’s penalties either side of the try saw Bath lead 13-0 against a side who had beaten them in eight of the last nine Premiership meetings. The Chiefs were not playing the game on their terms, but they recovered to score two tries in seven minutes.

Both followed penalties which were kicked to touch, but neither followed driving mauls. O’Flaherty scored the first, coming off his wing to support a run by Jack Maunder as Bath geared themselves for a maul and then Sam Simmonds finished off a multi-phase move for his 13th try of the league campaign, just four short of the record with 10 rounds to go.

Bath extended their interval lead to four points with Priestland’s third penalty after Miles Reid, Underhill’s replacement eight minutes into the second half, won a penalty at the breakdown. Bath should have added to their cushion but Muir took the wrong option with Spencer free inside him after more handiwork by Josh Matavesi before Taulupe Faletau’s chip to the line was followed by a cheap penalty to the Chiefs.

Bath then knocked on after a scrum in their 22 and Exeter seized the moment. After Jack Innard was denied by Elliott Stooke, Sam Simmonds picked up from a scrum and Harvey Skinner was in support. Seven minutes later Skinner secured Exeter’s bonus point after finishing a 15-phase move.

Bath were spent, worn down by the champions who added some gloss to the end of their short losing sequence with tries by the Scotland second row Jonny Gray and O’Flaherty’s second.

It meant that for the fourth match in a row, the Chiefs defeated their West Country rivals by more than 20 points and did so by a record score here.