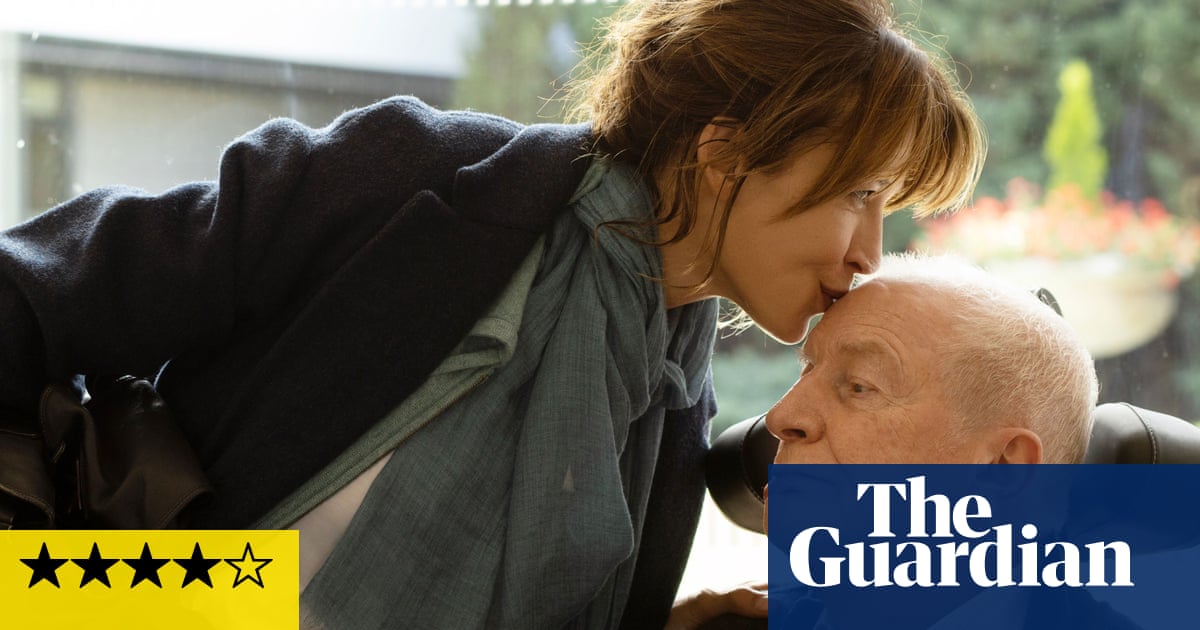 François Ozon has brought a tremendous understated confidence and artistry to this very affecting film about euthanasia and assisted dying. There is a robust unsentimentality here, encapsulated by the throwaway gesture in the title itself, leaving is to decide what it exactly it is in the end which has gone “well”. And the final shot of a dead person, the supremely difficult moment to bring off, is haunting in its lack of emotional affect.

André Dussollier, the veteran French character actor, plays André, a wealthy and socially well-connected retired industrialist (late in the film, he will ask his daughter if she has remembered to bring his Legion of Honour ribbon). In his late 80s, André suffers a stroke and the vigorous, handsome but cruelly sharp-tongued man that we see in flashback is reduced to a sad state in hospital: his face and right eye sagging. He is regularly visited by his daughter Emmanuelle, or Manue, played by Sophie Marceau (and based on the author of the original autobiographical novel, Emmanuelle Bernheim). She is patently his favourite, despite her agonised memories of his cruelty towards her when she was a girl. He certainly seems much closer to Manue than to his other daughter Pascale (Géraldine Pailhas) and indeed his ex-wife (played by Charlotte Rampling) who is herself consumed with her own ill-health and utterly unmoved by her ex-husband’s woes.

As for Manue, she once nurtured fantasies in girlhood of killing her nasty old dad. So it is supremely ironic that it is to her that he makes his final, imperious request: she must organise his euthanasia. This means she has to liaise with the relevant Swiss organisations and set up semi-clandestine arrangements with the lawyers so they don’t get sent to prison.

And as the weeks and months go by, André seems to be getting better, more interested in life, and Manue is hoping against hope that he will simply forget about this assisted dying business. Yet the film shows us that André’s morale is only improving because he assumes the release of death is near. But for Manue there may be no release – and by inadvertently granting her that awful childhood wish, his cruelty now has a new ingenuity. The situation brings us into contact with André’s angry and wounded former partner Gérard (Grégory Gadebois) and the down-to-earth Swiss woman who must carry out the process, played by Hanna Schygulla.

To André’s dismay, the whole thing is to cost 10,000 euros. “How do poor people manage?" él pide, to which Manue replies grimly: “They wait to die.” Could it be that this whole final scene in the final act of André’s life is just another example of his wealthy entitlement, his arrogance. Después de todo, the film shows us that he is not in unbearable pain and the quality of his life has not diminished catastrophically. He has just had enough; and has no intention of discussing it, debating it, or coercing our consent by being emotional about it.

And in its way, this film has precisely the same attitude. Another type of drama would put the issue-led handwringing at the centre of things. Not this film. It is just the hinge on which the family drama turns, and the performances from Dussollier and Marceau are quietly outstanding.