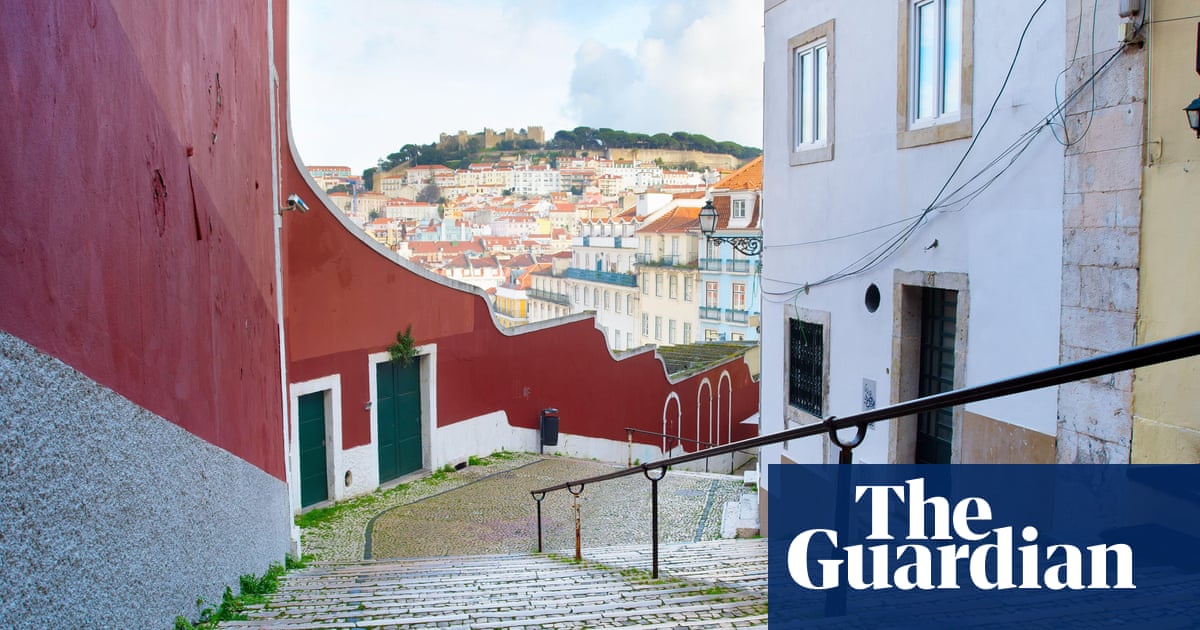 The art of flâneur-ing might be French and its most famous practitioners Parisians, but other European cultures have walking traditions, from the Italian passeggiata and Spanish paseo – social promenades to take the air as dusk falls – to German wanderlust: hiking with desire. Nothing opens up a city like a long ramble on foot. It’s the only way to make a place your own and unearth discoveries not listed in guidebooks or apps.

For all that it is mainstream, even fashionable, and was a favourite with no-frills flying weekenders before the pandemic, Berlin remains a strange, sometimes alienating city. This is especially the case when you go walking around its historic heart, where the Berlin Wall stood from 1961 に 1989. While unified Germany has thrown many millions at the city and tried to fill this former site of espionage, tension and trauma with newbuilds and showy upgrades, such as Norman Foster’s glass dome for the Reichstag, swathes of the area remain open to the sky. This accentuates a feeling of emptiness in what is a relatively unpopulous capital city – 3.6 100万, around a third of London – and also allows the mental space to conjure Berlin’s many ghosts.

Vague, unplanned walks around the former East and West will still evince differences – the tank-friendly width of Karl-Marx-Allee, the glitzy shops along the Kurfürstendamm – but if you want to chart a route, I’d recommend a wander taking in the following: the Hansa Quarter (Hansaviertel), a showcase estate where renowned architects (including Alvar Aalto, Walter Gropius, Arne Jacobsen and Oscar Niemeyer) designed modernist residential buildings at a site destroyed in the second world war; the Tiergarten inner-city park; Alexanderplatz, which still exudes something of the old East; and Prenzlauer Berg, where there are nice coffee shops and lunch spots. Berlin is big, but you can always hop on an S-bahn train for the return journey. If you fancy a hike outside the central districts, wander down to former Tempelhof airport, where the narratives of Nazi Germany, the Berlin airlift and modern migration crisscross like contrails.

While he was imagining the Dublin perambulations of Leopold Bloom and Stephen Dedalus that would provide the two plotlines of Ulysses, James Joyce was doing his real walking around the city of Trieste. The august, oft-overlooked port on the Adriatic is a perfect place for the activity, partly because it has much-loved cafes – some beautiful, all convivial – that serve as pit-stops, but also because it has such a splendid seafront.

One of the grander cafes, インクルード Caffè degli Specchi stands on the main square, the Piazza Unità d’Italia. This is a natural place to start a zigzagging walk, taking in the Joyce museum, the art collection and sumptuous interiors at the Museo Revoltella, the graceful Borgo Teresiano, named after the 18th-century Habsburg ruler Maria Theresa, そしてその Caffè San Marco, a spacious bookshop-cafe with an interior in the Vienna secession style (and upwards of 50 types of cups of coffee available – as Trieste has long been at the centre of the bean-importing trade). From the centre, it’s a short, steep walk up to Villa Opicina for a view over the Gulf of Trieste. If you have energy for more walking, continue along the wooded gravel path of the Strada Napoleonica towards Prosecco. It’s 5km if you go the whole way; you’ll see the Castello di Miramare, the summerhouse of Archduke Ferdinand Maximilian and his wife, シャーロット, at the foot of the cliff. You can come back along a different footpath.

The ancient French city has it all: the sea-facing Vieux-Port, the narrow, winding streets of the Le Panier neighbourhood, the sweeping view from the Basilique Notre-Dame de la Garde, and the Rue de la République quarter, with its Haussmannien girth and grand mid-19th-century buildings. Just three blocks in from the port is marché Noailles, where you can sample fresh produce and sniff the spices at the daily marché des capucins, and have mint tea or a kebab, flatbread and couscous. Follow the front round to the Mucem (Museum of European and Mediterranean Civilisations) – but make sure to check out some of the city’s smaller museums, あまりにも.

In his essay Hashish in Marseilles, philosopher and urbanist Walter Benjamin recounted an evening strolling around cafes after consuming the drug: “I now suddenly understood how to be a painter – had it not happened to Rembrandt and many others? – ugliness could appear as the true reservoir of beauty, better than any treasure cask, a jagged mountain with all the inner gold of beauty gleaming from the wrinkles, glances, features.” Visitors today are unlikely to find Marseille particularly ugly, but it is a somewhat disorderly city and run-down districts rub up against more well-heeled ones. If hashish isn’t your thing, then artisanal pastis – all the rage right now – will do just as well to blur the edges.

Towns spread out over steep hills can make for arduous ambling, especially if dressed in your best city gear and the sun is up. The streets that climb up and down Alfama, Bairro Alto and Chiado benefit from their narrowness – you can usually find shade. Lisbon is one of those cities where the least attention-seeking restaurants serve some of the best food, and it pays to stray away from the honeypots and find where locals are having lunch. Fish is usually excellent, and for comfort food it’s hard to top dishes such as bacalhau à brás (salt cod with egg and potatoes), grilled sardines or cataplana (white fish and seafood stew).

On your wanderings, you’ll come upon lovely bars and cafes, some of which fill with the melancholy strains of live fado after dark. The late, great fado singer Carlos do Carmo, on his landmark 1997 アルバム, Um Homen na Cidade (A Man in the City), intones on the title track, “I grab the dawn, as if it were a child … I go down the street of the moon.” The Portuguese capital is at its best at the top and bottom of the day, before the streets steam with people and sunshine. Lisbon has suffered the woes of overtourism in recent years. Do Carmo’s album namechecks many city landmarks and if your Portuguese is up to it, you might try out a situationist experiment and use fado lyrics as your map and guide – it’s sure to take you away from the hubbub.

A local academic told me that Søren Kierkegaard always enjoyed walking on the shady side of the street. Even if it’s an apocryphal anecdote, it chimes with the moodier, morose side of the famous Danish theologian and proto-existential philosopher. For all that, he did once write, “Above all, do not lose your desire to walk. Every day, I walk myself into a state of wellbeing and walk away from every illness. I have walked myself into my best thoughts, and I know of no thought so burdensome that one cannot walk away from it.” His home city, famous as being among the most cycle-friendly in the world, is also kind to those who take off on two feet.

Start a bookish walk at the Assistens Cemetery. It’s not the least bit gloomy; locals come here to relax, have picnics and enjoy the lush foliage. Kierkegaard and Copenhagen’s other – even more famous – writer, Hans Christian Andersen, are buried here. Beyond the walls is the Nørrebro district, full of designer clothing stores and galleries, murals and craft beer outlets – the kind of superficial, fun things Kierkegaard would have hated. From here, drift thoughtfully towards the harbour area, passing through the delightful green space of the Royal Library Garden en route and popping into the Royal Library, AKA Black Diamond library, due its dramatic form, which has a great collection of manuscripts on show. For a bite to eat or a drink, choose between the Paludan Bogcafé and the opulent Library Bar at the Plaza hotel – known for its Chesterfield chairs, jazz gigs and excellent cocktails.

The historic core of Seville is quite compact, but if you take in Triana, across the Guadalquivir, and the Isla de la Cartuja, which hosted the 1992 Expo, you have a sprawl to take on. As with all of Andalucía’s tourist-friendly spots, Seville gets its fair share of moochers and souvenir-browsers. It’s all too easy to join the throng of lost souls. One way to impose a degree of design on your outing is to undertake part of the route for which the city is famous: the Holy Week procession. ザ・ cofrades (religious fraternities), in their disarming pointed hats, gravitate to the centre from parishes all over the city, but are all funnelled into the last few streets, from Calle Campana, down Calle Sierpes, across Plaza de San Francisco, along the Avenida de la Constitución, concluding at the cathedral. Next door is the Real Alcázar, a complex of palaces, fortifications, patios, reflective pools and beautiful gardens and olive groves laid out on a neat grid. A complicated melding of mudéjar and other European architectural styles, the site was developed in the 11th century, when Seville was under the rule of the Arab Muslim Abbādid dynasty; it was added to and modified many times on its way to becoming a Christian royal residence.

Cross the river to enter Triana for contrast: once extra muros, this insular district has links with Seville’s glory days as a port, as well as its ceramics industry, matadors, flamenco artists and Roma people. Local cults honour the Virgen de la Esperanza (Virgin of Hope), whose image is kept in the Sailors’ Chapel, and the Cristo de Expiración (Christ of the Last Breath) – whose statue in the namesake church on Calle Castilla is said to be the likeness of a stabbed Roma man, the sculptor Francisco Ruiz Gijón, found in the streets here in the 1680s. Triana is loveliest from dusk, when you can get a fino or a cold beer on the riverside of Calle Betis before heading into the bowels of the barrio to find tapas and flamenco.

I am writing this on day zero, having arrived at my government-designated quarantine hotel after 24 hours of travel. I need to isolate in my room for 10 days and 11 nights. です, 穏やかに言えば, a bit of a dump: a ...