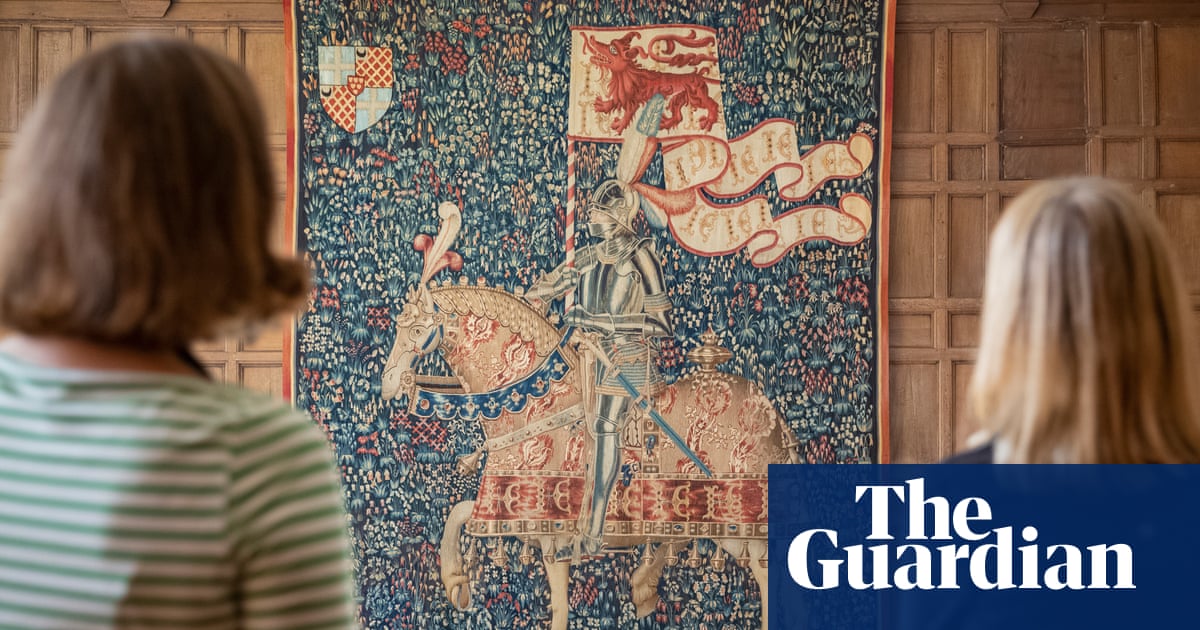 A 15th-century tapestry with a mysterious history, the oldest owned by the National Trust, is returning to display after experts spent four years cleaning and conserving it.

The tapestry at Montacute House in Somerset depicts a knight in armour parading his elegantly decorated horse against a dark blue background covered with a highly detailed flower pattern, called millefleurs, or a thousand flowers.

But 1,300 hours of cleaning and conservation by experts to strengthen and bring out the tapestry’s colours has reignited questions over the history of the work, which disappeared for centuries and is one part of a much larger and undiscovered set.

The knight is shown with the arms of Jean de Daillon, a nobleman and friend of King Louis XI of France. What is known is that Daillon commissioned the tapestry in 1477 from weaver Guillaume Desremaulx in the town of Tournai, in what is now Belgium. Upon completion it was presented to him as a gift from the people of Tournai.

Unfortunately Daillon did not have long to enjoy his gift – he died in 1481 and may not have seen the finished works. The tapestry, and presumably the other pieces, was last recorded the following year when his widow Marie Laval delivered it to a well-known entrepreneur trading in wine and tapestries.

They then vanished from history for more than 400 years until 1910 when the knight appeared in an exhibition at the Metropolitan Museum of Art in New York. In 1935, it was bought by Sir Malcolm Stewart who bequeathed his collection of tapestries to the National Trust to be displayed at Montacute House in 1951.

Its origins only came to light in the mid-1970s when a researcher identified the coat of arms on the tapestry as belonging to Daillon.

Sonja Rogers, the National Trust’s house and collections manager at Montacute House, said that over its lifetime the tapestry had become weak and damaged from exposure to smoke from domestic fires and from crude, later repairs.

“After cleaning and conservation, the colours are now so much brighter and fresher, and the whole tapestry appears full of life and energy,” she said.

“But there are mysteries which still remain – we don’t yet know where the tapestry was during almost all of its history or even if more of the original set survived. It is one of only a handful of pieces that can be linked to a specific commission and it is the only 15th-century tapestry that can definitely be attributed to the city of Tournai.”

The tapestry was conserved at the National Trust’s textile conservation studio in Norfolk and sent to Belgium for specialist cleaning to remove decades of dirt.

Visible now are details of the knight’s fine features, as well as flowers in the millefleurs pattern, including poppies, daffodils, wallflowers and thistles.

It will be displayed in Montacute House throughout October and November.