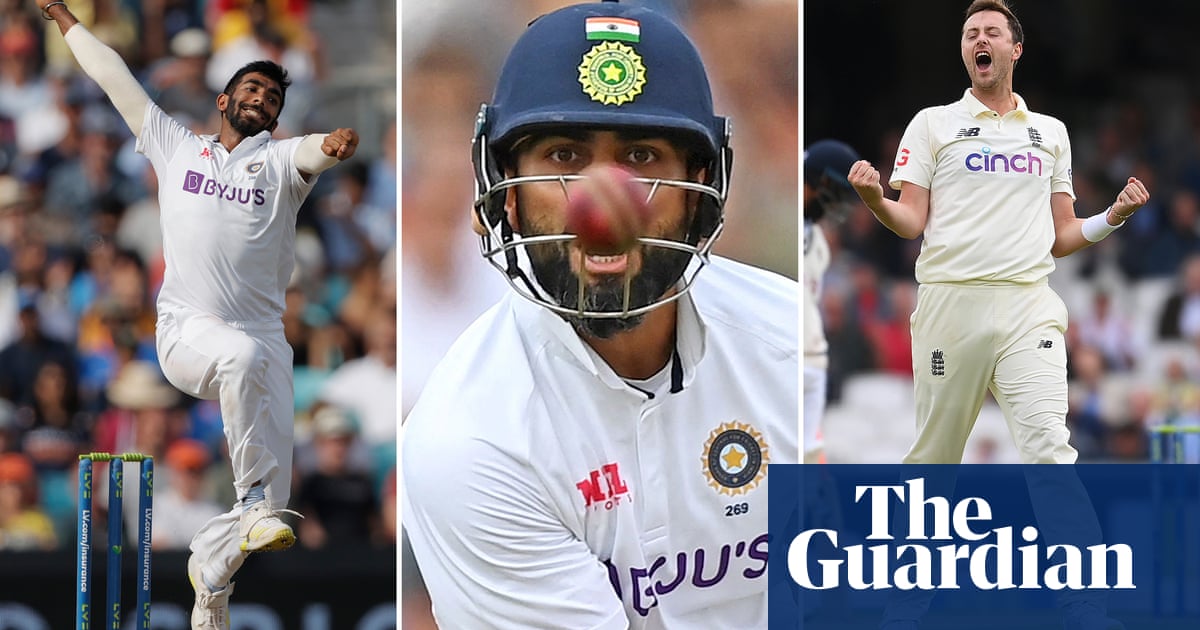 Joe Root: 564 runs, average 94; one wicket, average 40; seven catches
Joe Root was monumental with the bat, at times carrying his team as Atlas carried the globe, his performances no less remarkable just because they are expected these days. But his captaincy, in the key moments, was dismal, letting Mohammed Shami and Jasprit Bumrah get away from England at Lord’s with a wit that wouldn’t sit well with a schoolboy XI’s skipper. At other times, easy singles to fielders not quite saving one ceded the momentum of the match to India and his reluctance to bowl Craig Overton was inexplicable, preferring to flog his thoroughbred, Jimmy Anderson. He out-batted his opposite number by a distance, but was out-captained by the same margin. Grade A-

Rory Burns: 183 runs, average 26; two catches
He started the series with a duck (an occupational hazard for openers) but never went on to post a score that defined an innings, which is the job description for an opener. それでも, 29 Tests into his career, he too often fails to get his feet and hands into positions from which he can present the full face of the bat to the straight ball. He remains curiously vulnerable in the cordon. Grade C

Dominic Sibley: 57 runs, average 14; one catch
His technical issues finally overtook his rock-solid temperament and he returns to county cricket for an opportunity to find singles and boundaries, both of which eluded him for much of his time at the crease. Grade D

Haseeb Hameed: 140 runs, average 28
The fairytale return for the boy prince of 2016 began with that hideous golden duck, nerves seeming to paralyse feet and hands. Subsequently, he offered a mix of fluency and stasis, provoking some panicky shot selection that got him out at times. His low hands might not suit pitches in Australia, but he’s probably booked his place. Grade B-

Ollie Pope: 83 runs, average 42
The frenetic walking wicket of the series in India was replaced by the busy, punchy, elegant batsman who has drawn parallels with Ian Bell. 彼の 81 was England’s best score of the series not made by Joe Root, a thin compliment indeed, but one that shows that he has taken his chance. Grade B+

Dawid Malan: 106 runs, average 35
He demonstrated that dreaded trait of a batsman: the ability to attract a good ball. At times, his economy of movement allied to powerful cutting and driving remind one of Marcus Trescothick in his prime and, at other times, Graeme Hick in his largely unsuccessful quest to work out a reliable game for the Test arena. A successful, if not wholly impressive, return to the Test arena. Grade B

Jonny Bairstow: 184 runs, average 26; nine catches
The destructive batsman of the white-ball game disappears when red-ball kryptonite is propelled towards him. To be as vulnerable as he is to the straight ball beating the inside edge after 78 Tests suggests that his time is up, for all the eye-catching boundaries that illuminate innings terminated too early and too easily. Grade C-

Sam Curran: 74 runs, average 19; three wickets, average 79; one catch
England’s player of the series on India’s last visit looked too meek with the ball and too chancy with the bat. Grade C-

Moeen Ali: 83 runs, average 17; six wickets, average 50; seven catches
He was milked mercilessly with ball in hand and played some extraordinary shots to make runs – and to get out. For all his near 200 Test wickets, one wonders how many of them have seen him bowling when a wicket goes down rather than working through a plan and reaping its reward. If only his play were as strong as his interviews. Grade D+

Jos Buttler: 72 runs, average 14; 18 catches
Behind the stumps, he took his catches without suggesting he had made the kind of step up that Alec Stewart made at a similar time in his career – moving from competent to outstanding. In front of the stumps, he remains the white-ball gamechanger who changes few red-ball matches. His 18-ball 0 in the first innings of the series was like watching a man construct a sentence using a foreign language phrasebook. It was not his fault he was picked with so little preparation but, 53 Tests into his career, England are still looking for a player who probably isn’t there. Grade C

Craig Overton: 43 runs, average 14; eight wickets, average 21; three catches
He hit the deck very hard on a line and length and seldom offered easy runs, but his captain just didn’t fancy him, handing him an ageing ball if handing it to him at all. He was disappointing with the bat, but probably the best of a pretty unreliable slip cordon. Grade B+

Dan Lawrence: 25 runs, average 13
Perhaps the victim of cries of “something must be done!” after the first Test. There’s an air of the stopgap clinging to his Test career – unfairly so, as three half-centuries in eight tough Tests suggests he has earned some patience. Grade D

Ollie Robinson: 45 runs, average eight; 21 wickets, average 21; one catch
The bowler who has taken wickets for years in county cricket by aiming at the top of off stump with some moving this way a bit in the air and off the pitch and some moving the other, is now taking wickets in Test cricket with the same method. With so little to go wrong, it’s hard to see anything but the brightest of futures – as long as he doesn’t try to add 5mph. There is nothing wrong with being more Vernon Philander than Dale Steyn. Grade A+

Jimmy Anderson: four runs, average one; 15 wickets, average 25; one catch
One masterclass after another until the workload caught up with him and he returned to the mortal plain. Afforded enormous respect by the India batsmen, who simply opted to play him out more often than not, though that proved beyond many of them. His unique skills and knowledge demand that he be picked whenever possible but, without Ben Stokes in the side, another has to be able to step in to give him a session off, especially in second innings – a workload of 28, 54.3, 34 そして 47 overs in four Tests just isn’t acceptable. Grade A

Virat Kohli: 218 runs, average 31; six catches
Almost visibly wrestling with his rhythm bat in hand, he showed only glimpses of his fluency and none of his relentless efficacy. It looks like a dip in form, rather than a more permanent decline, but he’ll need runs soon to stop the drum that always beats around him growing louder. His captaincy, from the tone set with his fast bowlers to his roaring on of Bumrah and Shami from the Lord’s balcony as Root fell into his trap, was brilliantly planned and executed. If not playing R Ashwin was a mistake, he can just point to the scorecards and ask why. Grade A-

Rohit Sharma: 368 runs, average 53; three catches
After the shellacking at Headingley, he walked out to bat in the second innings at the Oval with the series poised at 1-1 and with a deficit of 99 to overturn on a pitch still offering plenty to the bowlers. Having fought very hard indeed, uncharacteristically blocking half volley after half volley, he left the crease almost six hours later, 129 to his name and with 80 more overs in the England bowlers’ legs. That is a series-turning innings. Grade A-

KL Rahul: 315 runs, average 39; three catches
Asked to do a job as opener, he simply stroked the ball to the boundary or found singles at will off England’s change bowling before tailing off a little, his concentration sapped by the intensity of back-to-back Tests. Grade B

Shadul Thakur: 117 runs, average 39; seven wickets, average 22
The journeyman bowler who bats transformed himself into Kapil Dev, repeatedly delivering a considered counter-attack with bat and ball that permitted not a shred of self-doubt. Though his bowling might be specifically suited to English conditions, he made the absolute most of his talents. Grade A-

Cheteshwar Pujara: 227 runs, average 32
When a billion or so Indians were calling for his head and it looked like he could barely block a straight one, he decided to play a few shots and looked a much better batsman for it. That showed the courage that had made him a hero of India’s series win in Australia, but whether that will be enough to keep him in the XI much longer remains to be seen. Grade B-

Ravindra Jadeja: 160 runs, average 23; six wickets, average 45; one catch
Not at his sword-swinging best, but a swooping presence anywhere in the field and a purveyor of the two-minute maiden that can disrupt a batsman even if he doesn’t get the wicket himself. He proved something that we all know: one of the world’s best No 7s is unlikely to become one of the world’s best No 5s. Grade B–

Rishabh Pant: 146 runs, average 21; 14 catches
Much-improved behind the stumps, especially in his footwork down the legside to the quicks, he also set the tone in the field that Kohli likes, more irritating than truly hostile, with the energy always dialled up to 11. He stopped believing his own publicity after some farcical innings in time to show us how talented a batsman he is with a beautifully constructed 50 at the Oval. Grade B-

Mohammed Shami: 75 runs, average 19; three wickets, average 41
He bowled better than his figures suggest but his main impact on the series came with his extraordinary partnership with Bumrah at Lord’s as England played the man and not the ball and he took the game away from his brainless opponents with an undefeated partnership of 89. Grade B-

Umesh Yadav: 35 runs, average 18; six wickets, average 23
Having been dropped in to replace the hapless Ishant Sharma, he bowled like he had never been away, asking questions of the batsman with ball after ball. Grade A-

Jasprit Bumrah : 87 runs, average 17; 18 wickets, average 21
He won a crucial battle with bat in hand at Lord’s and plenty more with ball in hand everywhere else, his fearsome yorkers taking the pitch out of consideration. By varying his attack from over and round the wicket and a threat short, on a length and full while giving little away, he looked as strong a candidate as Patrick Cummins for the title of the world’s most complete fast bowler. Grade A+

Ajinkya Rahane: 109 runs, average 16; one catch
Aside from a crucial innings when the Lord’s Test was in the balance, he contrived to use up a fair slice of luck in delivering tailender numbers. The glory of his win as stand-in skipper in Australia now looks very distant in the rear view mirror. Grade D

Ishant Sharma: 34 runs, average 11; five wickets, average 35; one catch
Recalled for the second Test, he found the movement and some of the lift that has been his trademark since Ricky Ponting was his bunny all those years ago, but it deserted him completely at Headingley and he was ruthlessly dropped as a result. Grade C-

Mohammed Siraj: 14 runs, average seven; 14 wickets, average 31; two catches
India’s gobby little jack-in-the-box ruffles feathers and makes things happen, rewarding his captain’s faith in his impact with key wickets. As has been the case down the decades for change bowlers, he benefits from coming on after the peerless Bumrah, but his value goes well beyond that of a second fiddle. Grade B