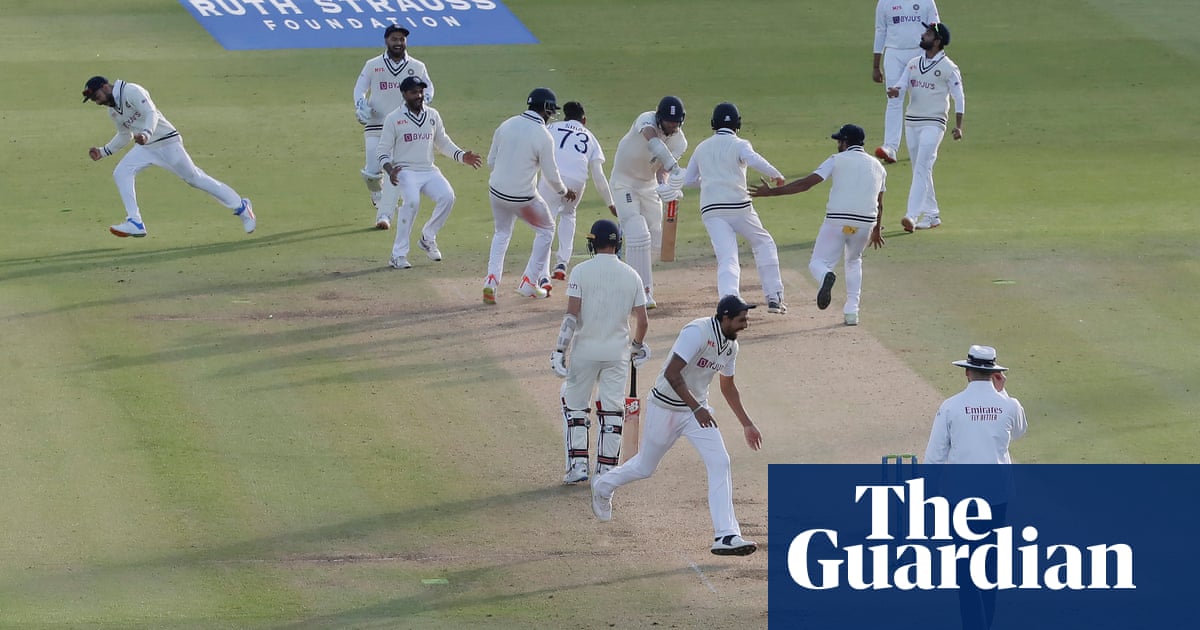 Ollie Robinson emerges from the darkness of the Long Room on his way out to the middle. England are 90 for seven and Robinson is about to face the hat-trick ball from Mohammed Siraj. All around the ground, India fans are in raptures. Standing at first slip, Virat Kohli is waving his arms, conducting them like an orchestra. The prevailing smell is of English blood.

As Robinson descends the pavilion steps, a couple of India players in tracksuits are coming back in the opposite direction, having just been out on the field delivering drinks. Robinson stops and waits for them to step aside. They do not step aside. Robinson waits. They wait. Uiteindelik, after a fashion, they sort of awkwardly squeeze past each other. The whole encounter lasts barely a couple of seconds and yet as a motif for this bruising, absorbing final day it is hard to beat.

There was nothing casual in Kohli’s choice of words late on the fourth evening to James Anderson, that this wasn’t his “fucking backyard”. This is a team who all pledge allegiance to the Indian army, who have plotted out this tour with the precision of a military campaign and who treated this ground as if it was enemy turf to be claimed, inch by inch, yard by yard. India didn’t just win at Lord’s; they annexed it.

You could see it at the moment of victory, in the way the jubilant players reeled across the grass as if were their own fresh conquest. By the time Anderson had completed his final lamentable defensive stroke, four of the six stumps had been uprooted. In the stands ecstatic India fans, lured to St John’s Wood by the scent of victory, £20 tickets and the warm evening sunshine, roared every tail-end run and whooped at every play-and-miss.

For Kohli, this was the ultimate vindication, a victory born of Total Kohliism: a captain who may no longer lead with the bat but who has moulded this team in his brazen image. This is why it was one of India’s greatest wins on English soil: not so much the fact or the margin of victory, but the manner and the swagger.

They did it in the modern Indian way: with four brawny fast bowlers, with clear-headed single-minded batsmanship, with a blend of traditional red-ball and innovative white-ball skills, with no quarter given and no backward step taken.

Has an English Test team ever encountered this sort of hostility in a home fixture? The West Indies sides of the 1970s and 1980s usually preferred to issue their rebukes with ball and bat rather than their words. The Australia teams of the 1980s and 1990s didn’t have three-quarters of the crowd urging them on. But here there would be precious few hiding places for Joe Root’s side, no respite from a humiliation that in its harrowing, chastening quality will be one of their most unpleasant in recent memory.

In a way it was a kind of emasculation: not on the balance of play over the course of the match, but in how thoroughly superior India were when it mattered and how instinctively they knew it, how meekly England imploded in a haze of misplaced hubris and sublimated inadequacy.

In the first 13 sessions of this game, there was no visible gulf in ability between two sides. Over the final two, as India wrenched control first through Mohammed Shami and Jasprit Bumrah with the bat and then Shami and Bumrah with the ball, England looked like children playing an adult game.

“It’s awesome fun!” tweeted Stuart Broad as Rory Burns was dismissed early on the fifth afternoon to leave England one for one after three balls of their second innings. This would not, miskien, have been the prevalent sentiment in the England dressing room. Pretty much from the moment Robinson dismissed Ishant Sharma in the eighth over of the morning to open the door to victory, England were not only outclassed but outthought, not only humbled but harassed, not only beaten but bullied.

The immediate postmortem will focus on England’s collective brain-fade with the ball in the morning session: a period that betrayed not English bravery but English insecurity, a lack of belief in their ability to win the game through patience. But England should have been more than capable of seeing out 60 overs on a slow pitch. In plaas daarvan, in the space of 11 balls, both openers were gone.

There was a certain irony in the fact that the final decisive blow – Bumrah’s brilliant slower ball to trap Robinson – came from a piece of IPL artistry, an object lesson in high-class decision-making under pressure.

A little before 7pm, as the sun set on Lord’s, a magnificent cloud of ochre dust rose from the pitch. The groundstaff were in the middle sweeping the pitch and as they diligently worked away it felt as though they were purging and sanctifying the battlefield, clearing away the spoils of some great war. In reality the war is barely begun: one down, England now head north to Leeds to lick their wounds.

Time will tell if this bruising defeat has broken their fragile resolve. If so, it could well be a long and ruinous summer.