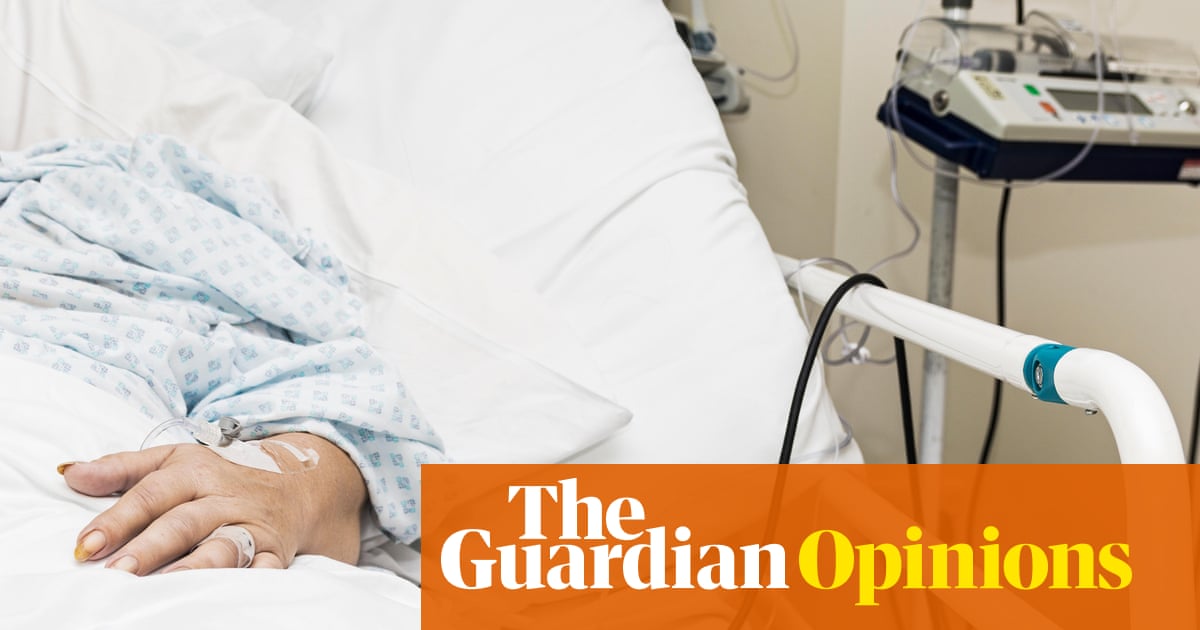 Of all life’s seven ages, which do people value most? Surely no one puts their final few months at the top, when all that’s left is the hope of avoiding departure through a torture chamber. Yet the UK spends most on the end of life, when there’s no future left.

The National Institute for Health and Care Excellence (Nice) injects rationality and public consent into the most ethically fraught choices in health priorities. On Thursday, it opened a consultation period for new guidelines on how much NHS England should spend on end-of-life drugs, planning to remove some of the extra funding for very expensive drugs that may only delay death a little. About 15% of hospital spending goes on patients in their last year, and nearly a third on people in the last three years of life.

Nice sets a standard limit: no drug can cost more than £30,000 a year, and it has to be a year of good-quality life. But a while back, under pressure, Nice raised that to £50,000 for drugs in the last three months of life. Professor Gillian Leng, Nice’s chief executive, tells me public opinion demanded it (the Mail had been running a ferocious campaign for hyper-expensive end-of-life cancer drugs). But now, she says, public opinion has shifted considerably against spending more on final months after Nice’s consultation with patients, the public and medical professionals. That extra £20,000 should be reapportioned.

Looking at the whole lifespan, Nice thinks that any extra money should go to those with severe ailments such as rheumatoid arthritis; to those with mental health conditions; or to help severe genetic diseases affecting children. New gene therapies can provide a one-off treatment to a young child that will cure them for life, albeit at very high cost. A new Innovative Medicines Fund will make some of those treatments possible.

NHS spending has always been rationed, and will always be. Choices must be made in good times as well as during the cripplingly low funding of the last decade. Labour created Nice as the rational rationers just before it raised NHS spending as never before, by 7% a year. Nice put a stop to the postcode lottery where some doctors prescribed expensive bad-value drugs while drug companies lobbied consultants to prescribe new – or just copycat – expensive products with unknown value for money.

There have been battles: drug companies have sought judicial reviews of Nice decisions, such as over ineffective dementia drugs. But the accuracy of Nice’s evidence and thoroughness of its consultations means Nice has always won. This week, caught in the middle of a hot dispute between medics over treatments for ME, Nice has paused before publishing new advice that would withdraw support for psychological and exercise therapies. But expect Nice to provide what will become the most authoritative standard view.

The body can only instruct the NHS on drugs. The wider irrationality of health spending is, sadly, beyond its remit. The Institute for Fiscal Studies says that cuts to social care of 31% since 2010 have led to “substantial increases in emergency department visits made by patients aged 65 and above”, accounting for up to half of the growth in A&E use by that demographic. George Stoye, the report’s author, has found other oddities: among the dying, more is spent on those with a partner, possibly because an advocate demands more treatment.

Nice’s proposed cut in extra spending on drugs for the last months of life may be controversial. Expect heart-rending stories of desperate families trying to keep a loved one alive a little longer, urged on by drug companies’ expensive promises. Almost all these costly end-of-life drugs are for cancer and Gillian Leng asks: why cancer should get priority? She is in a strong position to pose the question, as she has recently lost her husband to lung cancer and she tells me that drugs provided by the Cancer Drug Fund sustained his last days. But nonetheless, she wants parity between diseases and stages of life.

It should be no surprise that public attitudes on the end of life have changed. For decades, public opinion has backed the right to assisted dying. The great majority want the right to end their own lives at a time of their choosing. The BMA next month is likely to abandon its objection to assisted dying. Parliament may soon debate a bill on assisted dying proposed by Baroness Meacher and there are more new MPs ready to back the public view. One argument often used by opponents is that dying people would feel pressured “not to be a burden”. But supporters ask why that should be an illegitimate reason. Many in terminal illness have no wish to stay alive a few months longer as a great burden to family and community. That’s a matter for each person to decide.

But it’s for Nice to decide whether drugs for terminally ill people get a higher subsidy than for those with severe illnesses who may have many good-quality years ahead. Easing the exit from life with the best possible palliative care is the way to spend funds, not on wastefully expensive drugs to prolong the inevitable. On this, as on all things, Nice has proved itself the voice of reason.