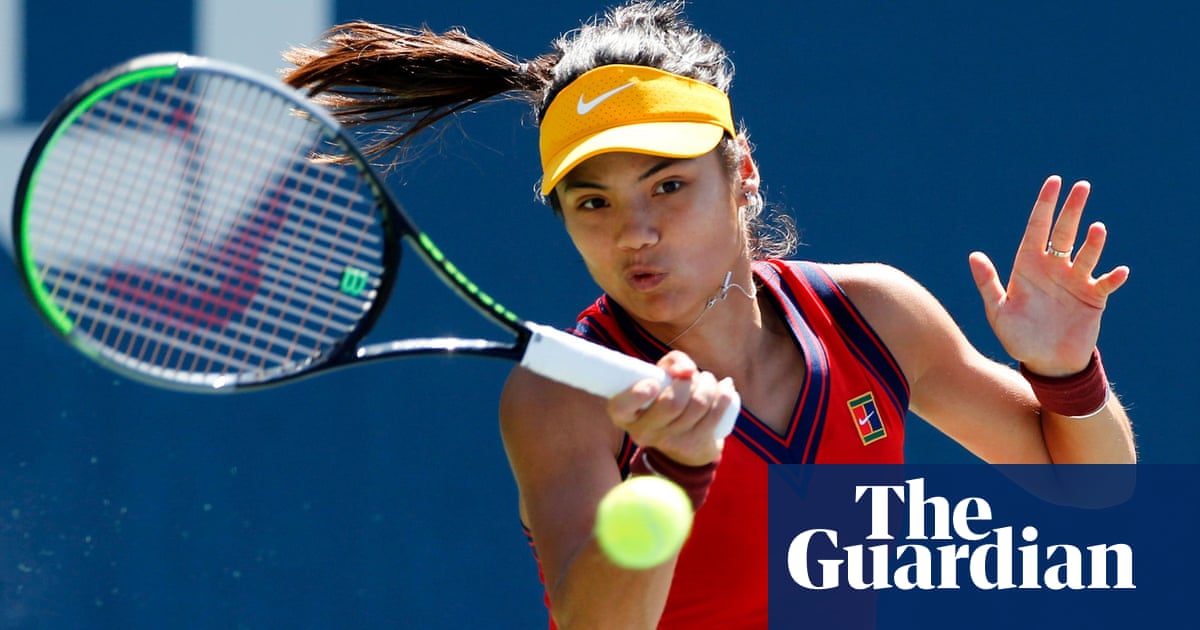 mimma Raducanu was in the process of tearing through yet another higher ranked opponent on Thursday, estableciendo un 6-2, 4-0 liderar contra Zhang Shuai en la segunda ronda del US Open, when the experienced Chinese player began to pull her back down to earth. As Zhang landed blows and harassed the Raducanu forehand, the rallies lengthened and the intensity became more pronounced.

It was at Wimbledon two months ago that the match intensity against another top-100 player, Ajla Tomljanovic, proved too much for Raducanu, leading to her retirement from their fourth round match due to breathing problems. But here she adjusted well and closed off the match 6-2, 6-4, clinching match point by winning the final attritional exchange.

The way that Raducanu has improved over the summer serves as a reminder of just how absurd every last criticism she received after her Wimbledon exit was. That was immediately clear at the time, but this summer’s US hardcourt run, during which she has now reached the US Open third round from qualifying without dropping a set, has made a mockery of any doubts.

The key to tennis, especially for any young player, isn’t merely winning matches but recognising the lessons that need to be learnt along the way. Nobody arrives on the tour fully formed. The experience they gain allows continued improvement and losses are both inevitable and often even more valuable than victories. The most successful players heed all of those lessons.

When Raducanu speaks about her Wimbledon run, she doesn’t only focus on the wonderful victories. She has said numerous times that her experience underlined the sizable physical gap between her, having barely competed against top players in her career, and the seasoned adult pros on the WTA. She was immediately determined to address her fitness after the event and it remains a continuous goal.

“Wimbledon taught me how physical I had to be every single match and at the end, it was my physicality that let me down,"Ella dijo el jueves. “Now having played four or five weeks, I’m still extremely fresh and new to the whole situation but I think, given the matches that I’ve played, I’ve been able to keep up a lot more physically and that’s definitely the biggest standout thing in my game now, which is going to take me far or going to limit me.”

This is also why her coming third round match against Sara Sorribes Tormo will be so interesting. There are few greater reflections of durability and physical fitness in the women’s game right now than Sorribes Tormo, a 24 year old Spaniard who is enjoying a breakout year on the tour.

Sorribes Tormo was ranked 82nd exactly a year ago and over the past 12 meses, despite how congested the rankings have been during Covid, she has halved her ranking to 41 and she is top 30 en el 2021 WTA race rankings.

She is also, in short, a nightmare to play against. Sorribes Tormo is one of the fittest players in the game, which she pairs with maddening consistency, court sense and a vast toolbox of shots. Among players with more than 15 matches this year, Sorribes Tormo is the third most effective returner on the tour with 47.2% return games won. She is already renowned for the ability to make most of her matches so physical, forcing opponents into exhausting lung-busting rallies.

That style of play has yielded extremely consistent results throughout the year, reaching six quarter-finals in total and even securing her a straight sets win over No1 Ashleigh Barty at the Olympics last month.

If she doesn’t already, Raducanu will know all of this soon. Sorribes Tormo will not only be the highest ranked player Raducanu has faced, but she is in better form than the three top-50 players the Briton has faced to date. As Raducanu looks to break down one of the most solid defences on the tour, Sorribes Tormo will offer her none of the pace Raducanu loves to feed off from opponents, forcing her to step inside the court and generate far more of her own pace than in recent matches.

On the other side of this encounter is a first career major fourth round for either player and a possible match with top seed Barty there. Raducanu will step on the court desperate to fulfil her part of the equation and her form offers her a clear chance, but as she tests the limits of her own game against another of the best players in the world, for such an inexperienced young player the most important aspect of these encounters is what she learns from them. It will be an interesting and instructive afternoon for both herself and onlookers alike.