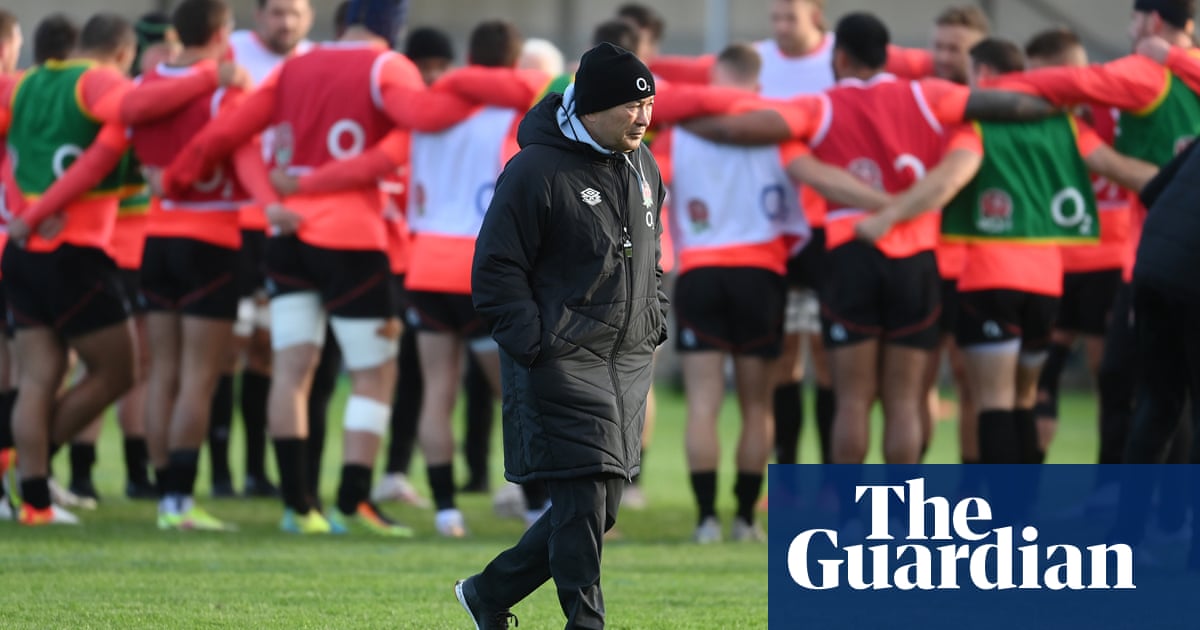 Either Eddie Jones has walked under a whole row of ladders or his England selection plans are falling victim to some other mystery curse. How else to account for the latest injury flurry which has removed a raft of backline options from contention before this weekend’s game with Tonga, a fixture earmarked as a springboard to another potentially exciting new Twickenham era?

In theory this was meant to be among the more upbeat weeks of Jones’s tenure, with some promising youngsters being expertly blended into a team with a licence to sparkle like a Bonfire Night firework show. In plaas daarvan, having jettisoned plenty of familiar faces for players such as Marcus Smith, Freddie Steward, Raffi Quirke and Louis Lynagh, several of the fresh-faced pretenders are struggling to make it out of the treatment room.

The aforementioned quartet plus Saracens’ in-form Max Malins are all now either doubtful or non-starters for England’s opening autumn Test, undermining Jones’s efforts to assemble a go-faster three-quarter line before the Wallabies and the Springboks come to town. With Quirke, Malins and Lynagh definitely out because of injuries which originated at their clubs and Smith and Steward as yet unable to train fully this week, the “new England” could end up looking remarkably like the old one.

If Smith cannot start, in die besonder, several rainforests-worth of previews will need recasting. The primary aim from this fixture, from England’s perspective, was to see how effectively the Harlequin could dovetail with Owen Farrell at 10 en 12. As it transpires, with Quirke also sidelined, the old firm of Farrell and Ben Youngs could be back, albeit with Northampton’s uncapped Alex Mitchell on the bench.

A penny for the thoughts of George Ford and Dan Robson, both of whom might have been suited to this fixture. In certain respects, wel, Jones deserves limited sympathy, his indecision still apparently final. Already he is in the position of having to talk up Jamie George after brutally jettisoning the Saracens hooker only last month. Now George has been retained in his matchday squad ahead of Leicester’s Nic Dolly, who was originally picked in front of him. If George is currently wondering which way is up, he is not alone.

There would be even less logic if George now starts and Newcastle’s Jamie Blamire, another original pick, sits on the bench. And what about Sam Simmonds, good enough to make the summer Lions tour but also now sent back to his club before the Tonga game along with Newcastle’s Callum Chick and Leicester’s George Martin? Rumours persist, intussen, that Courtney Lawes will wear 6 and Tom Curry operate at 8 at certain times this autumn. If so, and the in-form Alex Dombrandt is “only” warming the bench against the Tongans, when will the Harlequins No 8 ever be wholly trusted?

Round and round it continues to swirl. Is it actually more experimentation that England need or more far-sighted judgment, a better balance and greater stability? It is all very well Jones deciding Billy Vunipola may not make the 2023 Wêreldbeker, when he will be almost 31, but where does that leave Manu Tuilagi and Youngs who will be 32 en 34 onderskeidelik? Ma’a Nonu was 33 when he carved up die 2015 World Cup final but what if Tuilagi cannot regain full throttle this autumn?

It is remarkable to think, either way, that Jones has chosen 20 different centre pairings in his 66 Tests in charge and started his optimum pair together in just five of them. Between them Tuilagi and Henry Slade have pretty much everything a coach could wish for: power, a gainline-breaking threat, a sweet left boot and a nice outside break.

Think back to the spectacular 32-20 win over Ireland in Dublin in the 2019 Six Nations, die 40-16 obliteration of Australia in the World Cup quarter-final in Oita and even when England stormed to a dramatic 31-0 lead versus Scotland in that dramatic 38-38 Calcutta Cup draw at Twickenham in 2019. The common denominator, every time, was a Tuilagi-Slade midfield combo.

So if Smith’s “minor leg injury” forces him either to the bench or out of the 23 entirely, the silver lining could see Farrell lining up in his best position on his 100th Test appearance and everyone else finally being able to gauge whether England’s issues stemmed more from how they were previously being told to play than the personnel involved. With Adam Radwan and Jonny May on the wings there should still be oodles of pace and opportunity could also yet knock for George Furbank. Fitness permitting, naturally.

Die groot idee: could fixing housing fix everything else, ook?