When interaction between the generations is interrupted – and there doesn’t even have to be a pandemic; sometimes we just forget to call each other – it is easy for misunderstandings to flourish. Negative perceptions can build to such a pitch that, even if you had your grandchildren standing right in front of you, you possibly wouldn’t want to tackle them head-on. Or perhaps your perceptions aren’t negative – there are just pockets of puzzlement.

Four zoomers – Patrick Baggaley, Freya Scott-Turner, Rachel Ayo Ogunleye and Aidan Nylander, all born in 2000 – are here to clear up everything. Baggaley is a chef based in London; Scott-Turner is studying journalism and living in Cambridge; Ayo Ogunleye is studying medicine and based in Beckenham, Suid-Londen; and Nylander is between two degrees and lives in Newcastle.

Nylander: I’d say one of the big things is empathy. If they put themselves in our shoes, our attitudes might get closer on climate change and other societal things – race, byvoorbeeld.

Scott-Turner: I’ve got a more specific one. I don’t want to make generalisations, but we have a huge issue with disinformation and fake news and I feel as though the older generations are probably more susceptible to sharing and agreeing with stuff. We’ve grown up with the internet; if we see a viral page that’s not trustworthy, we just know. They’ll share anything from the University of WhatsApp: “Eat lemons and you won’t get Covid.”

Baggaley: I can understand why young people don’t want to vote or don’t engage in politics. I still see it as a bunch of 50-plus posh white men. So, for lots of people, that’s quite difficult to relate to. But personally I do vote and I always will.

Ayo Ogunleye: I actually disagree with the statement. If anything, my friends feel more inclined to vote now than ever.

Scott-Turner: It’s funny, because my most important thing would be having kids, but I am quite pessimistic about the future. I genuinely don’t know what the world will be like in 20 jare. I don’t know if I would want to bring a child into it. Monogamy for life is, ek dink, pretty unlikely. We’re always told we can find someone better. You’re not forming a nuclear household that you’re gonna stick through to the bitter end.

Baggaley: I wouldn’t say I was massively worried. I reckon I will probably end up in some form of quite traditional family, with a partner and children. I wouldn’t necessarily need to get married.

Baggaley: I have never heard of underground living as a possibility.

Nylander: I think all the scenarios seem pretty dark. I watched the most recent David Attenborough documentary on Netflix and he was talking about how we have passed so many environmental breaking points. What I took from it was that, for some things, it’s a bit too late and what do my efforts actually do at this point? It is quite defeating. So maybe I don’t worry about it as much because it’s a situation that I don’t think I can handle or I don’t think we can handle.

Nylander: I think we will always be remembered as the first generation to experience the internet. I was born in 2000 and I always find it so amazing – like, in 1998, what did they do?

Baggaley: Maybe we’re all going to be messed up by the pandemic. That messed up generation, who were locked inside for two years.

Baggaley: My understanding of identity politics, originally, was that it was a particular group that feels discriminated against, campaigning for their rights – which I think is obviously a really great thing. But I think young people now aren’t just sticking to the one identity. And people come out in support of each other. So I was going on Black Lives Matter demonstrations and women’s marches and supporting LGBTQ+ things as well.

Ayo Ogunleye: I think the term identity politics is used to trivialise conversations that are actually important to have. It’s an amazing thing that we’re talking more about how people navigate the world they live in based on who they are. It shouldn’t be something to make fun of.

Ayo Ogunleye: I would never associate not being able to get a job or low wages with that generation. I think it’s more to do with there being so much competition within our own generation.

Scott-Turner: Vir my, our problems are political issues. We’re all going to be stuck paying rent to landlords who bought these houses outright because 15 years ago they could. I would never just view it as: “Everyone over 50 did this and we pay the price.” These were policy decisions.

Scott-Turner: I think the odds are stacked against us with the voting system – we’re just outnumbered. We’re not the demographic that the MPs are going to prioritise. So maybe that earlier question was right, and we just don’t turn out to vote enough.

Baggaley: I recently spent a year volunteering at the primary school that I went to. They had doubled the number of students, but the space available stayed the same. So I did feel sorry for the kids there now. If that’s the trend, that is a negative thing. But it’s not something I think about my own childhood; I don’t think it affected me.

Scott-Turner: We love to romanticise the past, don’t we? When I talk to my mum about growing up in the 70s, sy sê: “We were just really bored all the time. We’d get a tyre and roll it around.” I think we were a lot safer. I had a good childhood. I enjoyed it.

Ayo Ogunleye: I feel like I had a lot of freedom and then got to year six or seven [10 of 11 jaar oud] and that’s when Madeleine McCann went missing. Na dit, there was a lot more emphasis on where you could go, who you could talk to, what time you had to be back.

Nylander: I don’t think safety is a bad thing at that age. Maybe being overcautious is understandable.

Scott-Turner: Trans people are some of the most oppressed people, so anyone adding to that I find really intolerable. But I think we need to be patient, because if we’re going to make any progress you can’t call people you disagree with stupid.

Baggaley: Being trans is such an important part of somebody’s identity, so to say “I don’t understand it” can be really horrible for somebody who, as this person sees it, is existing in the wrong body. Questioning somebody’s whole identity and suggesting that they’re not a real woman or a real man – I think that’s really horrible, to suggest that you can determine how someone else identifies.

Ayo Ogunleye: I do agree with that statement to an extent. If they were aware of it then [in the 80s and 90s], if they were clued up and just decided to sit back, that was lazy.

Nylander: I don’t necessarily blame them; the responses should have been far faster, but that’s with hindsight.

Nylander: I have tried spells of not being on social media, but fundamentally it’s impractical. You’re isolating yourself if you’re not using them.

Ayo Ogunleye: I use probably every single form of social media there is. I would not delete all my social medias, I just wouldn’t. For it to be gone, they would have to delete the whole site. When Blackberry Messenger got taken away, I stopped using it. That’s what it takes.

Ayo Ogunleye: If I emailed my friend saying: “Do you want to meet up?” they’d probably laugh. Phones are here for a reason.

Baggaley: The only people who email me are Uber Eats and Sainsbury’s.

Nylander: How big did snooker used to be?

Scott-Turner: I’m really good at online 8-ball pool – it’s on [the online gaming platform] Miniclip. I thought I was amazing at it, then tried to do it in real life and it was humiliating.

Ayo Ogunleye: I think more things have been targeted around virtual sex during the pandemic. But I wouldn’t say that people would rather have virtual sex than be with a real-life partner – that’s just a misunderstanding.

Scott-Turner: It would be interesting if VR becomes really good. Would we all be in the Oculus Rift, getting it on? But the technology is not quite there yet.

Baggaley: I didn’t realise it was a zoomer trend. I always say my thank-yous.

Ayo Ogunleye: Maybe our thank-yous aren’t what they expect. Soos, the other day, somebody sent me a gift for my graduation and my mum was like: “You have to show up at their house with flowers.” A thank-you text is not enough for them.

Baggaley: Where does that end? You give them flowers and then they give you flowers for giving them flowers?

Nylander: Maybe we all just need to say thank you to Trisha? 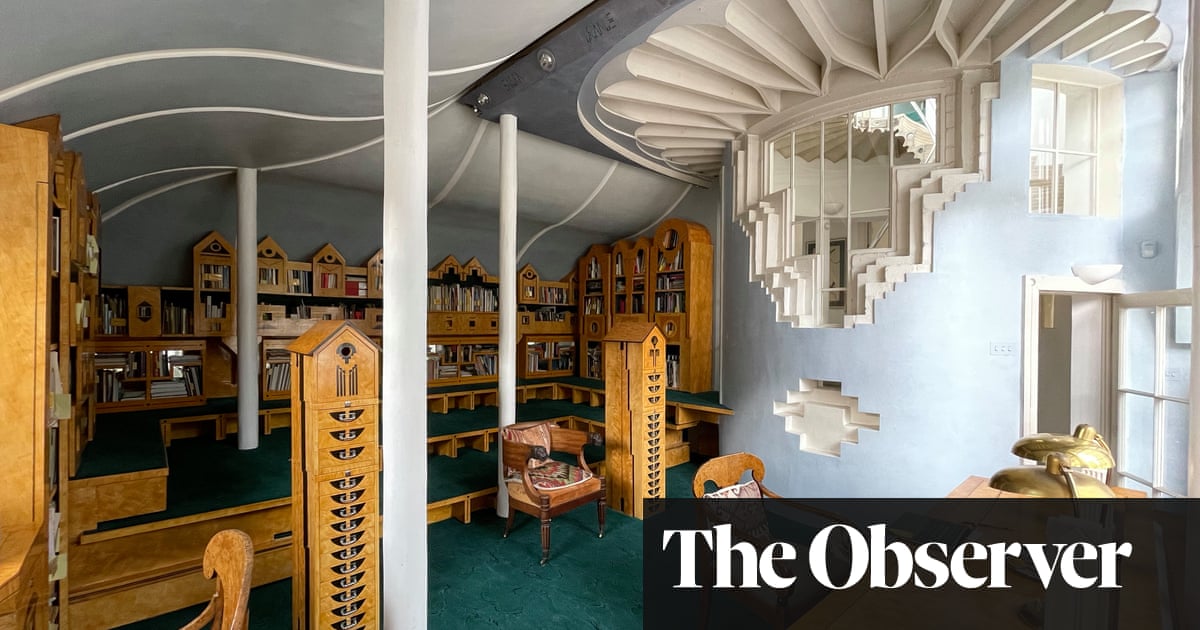 “A failure of recent architecture,” wrote the critic, theorist and architect Charles Jencks 45 jare terug, “has been one of communication.” He believed buildings should speak, that they should mean something to their i...