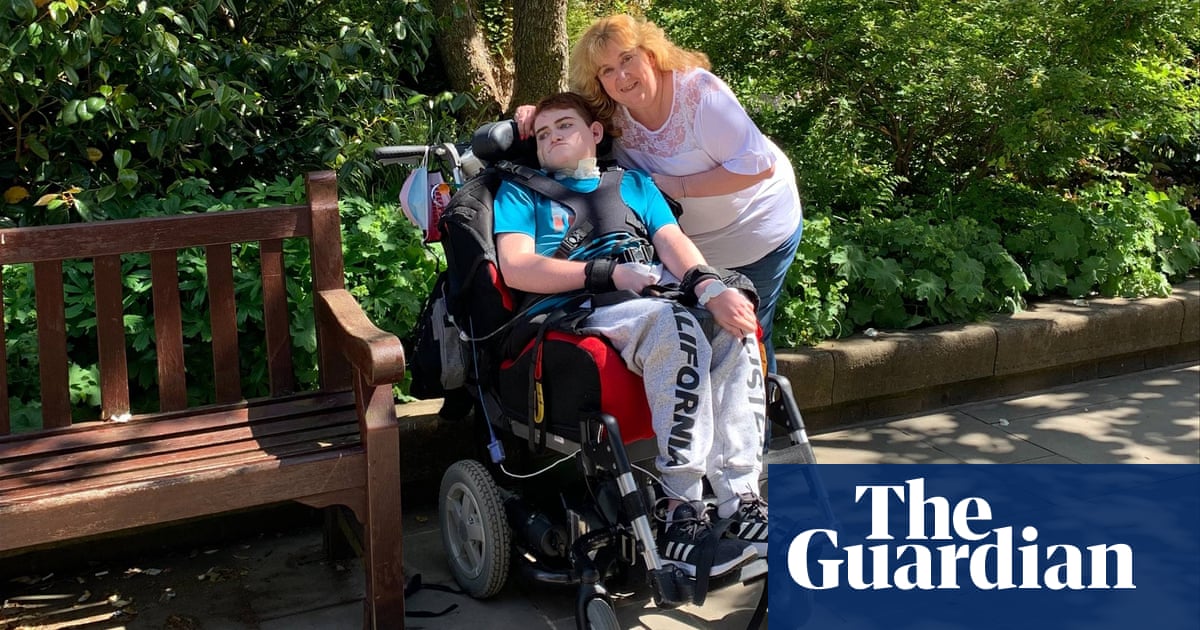 A severely disabled teenager is to mount a legal challenge after his benefits were cut off while he was in hospital receiving treatment for a life-threatening infection, leaving him thousands of pounds out of pocket.

Cameron Mitchell, 19, and his mother and carer, Nicola Clulow, are seeking to overturn a Department for Work and Pensions (DWP) regulation that suspends disability benefits for adults after they have spent 28 days in hospital, on the grounds the NHS is meeting the costs of care.

They argue the DWP rule is irrational because it breaches Cameron’s human rights and cuts against the purpose of the personal independence payment (PIP), which is a non-means-tested benefit to provide support for disability-related costs, including care and assistance.

Disability campaigners have long argued PIP payments should continue while a person is in hospital as their disability does not go away, and the costs incurred by family carers can be higher at this time. The DWP argues the rule prevents so-called “double provision” – the taxpayer paying twice for the same thing.

Cameron has had a neurological condition since birth that has left him unable to speak or walk and requiring 24-hour care. He also has epilepsy, muscle disorders, and suffers from frequent chest infections.

He was taken to hospital in Newcastle, 60 miles from his Carlisle home, in late December, suffering from septic shock. He spent the next six months receiving treatment in a high dependency unit, initially in the paediatric section of the hospital and subsequently on the adult ward.

His mother and father were in daily attendance and, as his full-time carers, were on call at the request of NHS staff. When his condition stabilised they took him on daily trips outdoors, and provided essential care such as suctioning his chest, looking after his stoma bag, and checking for hard-to-detect signs of distress and pain.

“Cameron has been hospitalised many times during his life and we have always stayed by his bedside day and night because he needs us to communicate for him and to help the medical staff identify and treat his complicated seizures. He can deteriorate very quickly unless you know what to look for,” said Clulow.

Egter, Cameron’s £151 a week PIP payment – and his mother’s £67 a week carer’s allowance – were stopped in May, several weeks after Clulow wrote to the DWP in March explaining the change in Cameron’s circumstances. They were also told they must repay hundreds of pounds in benefits dating back to the end of January.

“To suddenly be hit with the realisation that I was going to have to meet considerable extra costs and then find that I would have to do this on even less money caused me massive worry and stress when my only focus should have been on Cameron and his younger brother at home," sy het gese.

Carolin Ott, a solicitor with Leigh Day, which is acting on behalf of Cameron, gesê: “Cameron’s care needs are not and cannot be met by the NHS alone without the input of known carers, and those care needs do not suddenly cease to exist after Cameron has spent 28 days in hospital.

“Our client is arguing that the rule requiring suspension of PIP discriminates between disabled adults who require hospitalisation for more than 28 dae, whose care needs cannot be met other than with the input of a known carer, as compared to those who are hospitalised for less than 28 days.”

A complicating factor has been Cameron’s age – even though he was 19 he was regarded as still a child by the education system because he attended a special school and therefore his mother received child benefit. Children are not subject to the 28-day hospital rule, yet DWP regulations treat him as an adult.

Totdat 2015, children were subject to a regulation that suspended their disability benefits after they had stayed more than 84 days in hospital. This was overturned after the supreme court ruled it was “grossly unfair” and in breach of human rights.

The case was brought by the family of severely disabled five-year-old Cameron Mathieson, whose benefits were withdrawn after 12 weeks of what turned out to be a two-year stay in hospital. Cameron, from Warrington, gesterf in 2012.

A DWP spokesperson said: “We are looking at Mr Mitchell’s claim and will respond as soon as possible.”