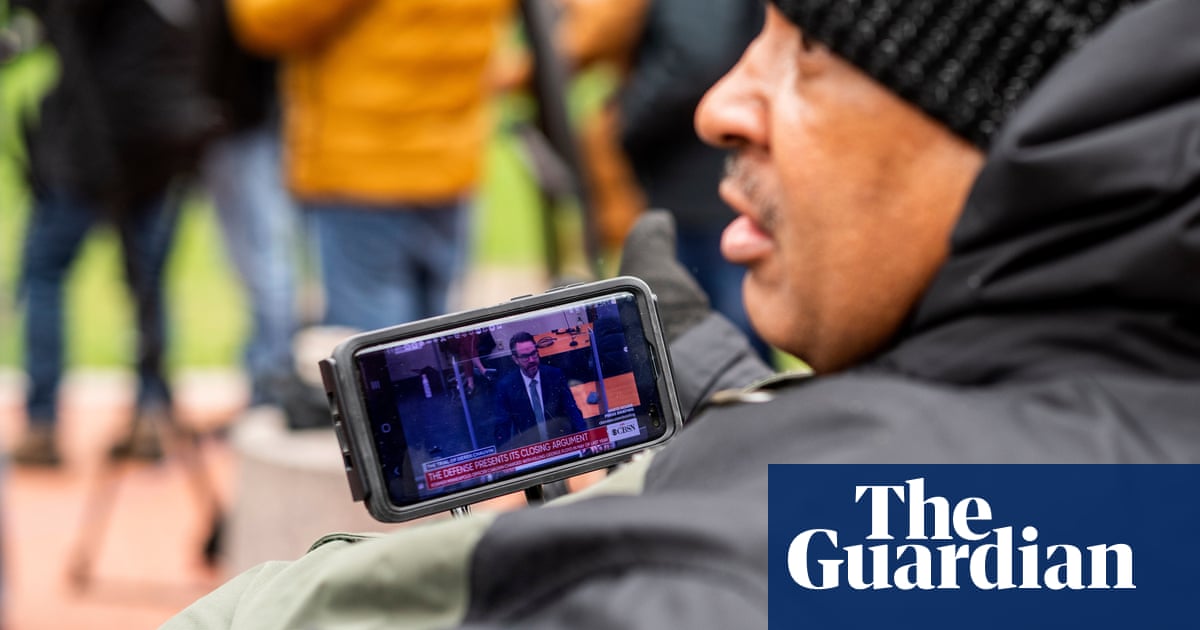 The Derek Chauvin murder trial heard closing arguments on Monday before the jury was expected to begin considering a verdict over the death of George Floyd that is anxiously awaited by millions of Americans.

Tensions are high in Minneapolis, with hundreds of national guard soldiers deployed across the city, ready for the outcome of the three-week trial. Last year, video of the former police officer’s alleged killing of Floyd, a 46-year-old Black man, prompted days of protests, riots and looting, and demonstrations across the US and world.

Protests flared up again earlier this month, over the shooting of Daunte Wright, a 20-year-old Black man, by officers during a traffic stop in a Minneapolis suburb.

Many Americans have reached their own verdict in the Chauvin case, and see the trial as part of a reckoning in the broader struggle for racial justice. Nonetheless, on Monday prosecutors focused on persuading the jury in their final statements.

Prosecutor Steve Schleicher told jurors the key to the case lay in video footage of Chauvin pressing his knee on to Floyd’s neck, even as he pleaded for his life, right to his very last words of “I can’t breathe”.

“This case is exactly what you saw with your eyes. It’s what you know in your heart,” he said.

Schleicher said the video showed Chauvin had a complete indifference to Floyd’s life even as he squeezed the breath out of him.

“For nine minutes and 29 seconds George Floyd begged until he could beg no more, and the defendant continued this assault,” he said.

The prosecutor said Chauvin’s “ego, his pride” led him to keep his knee in place, even as bystanders pleaded with him to stop, because he “wasn’t going to be told what to do”.

“He was going to do what he wanted, how he wanted, for as long as he wanted,” said Schleicher. “This was not policing, it was unnecessary, it was gratuitous, and he did it on purpose.”

If the jury agrees that Chauvin, 45, did commit an assault as he pinned Floyd to the ground, that will open the path to a conviction on the most serious charge of second-degree murder, which requires the former officer to have committed a felony that led to death.

“What the defendant did here was straight-up felony assault. It was not policing,” said Schleicher. “That killed George Floyd.”

If the jury does not agree that Chauvin’s use of force was criminal in itself, but showed “reckless disregard for human life”, it could still convict him of third-degree murder. Chauvin also faces a manslaughter charge.

In his instructions to the jury, Judge Peter Cahill said Chauvin was culpable if he took an action that caused Floyd’s death, even if other factors contributed to it.

That will help the prosecution because even if, as the defence claims, heart damage and drug use contributed to Floyd’s death, Chauvin will still be guilty if the jury finds his actions set heart failure in motion.

Schleicher derided defence claims that Chauvin’s actions were not the cause of Floyd’s death and that he succumbed to a heart condition, drug use and even carbon monoxide poisoning from car exhaust.

Schleicher asked if Floyd would have died that day if he hadn’t been pinned down by Chauvin and scorned the idea that he chose that moment to die of heart disease.

“Use your common sense. Believe your eyes,” he told the jurors. “Unreasonable force pinning him to the ground, that’s what killed him.”

Schleicher reminded the jury of testimony from medical experts who said the way Chauvin and other officers kept Floyd pinned to the ground cut off his breathing and was the sole cause of his death.

“George Floyd struggled, desperate to breathe, to make enough room in his chest, to breathe. But the force was too much,” said Schleicher.

Schleicher told the jurors they did not have to find that the defendant intended to cause harm or to violate the law in order to convict him of second-degree murder.

“The only thing the state has to prove is that he intended to apply force to George Floyd on purpose,” he said.

Chauvin faces up to 40 years in prison on the most serious charge but would probably receive a shorter sentence under guidelines.

The 12 jurors will be sequestered until they reach unanimous verdicts on each of the three charges. If they are unable to do so on all counts, a conviction on one will be sufficient. If they fail to reach agreement on any of the charges, Chauvin is likely to face a second trial.

Deliberations will continue until 7pm each day. But the judge said if a verdict is reached close to that time, it will not be revealed until the following day, as he wants to avoid an announcement after dark, out of concern that civil unrest might be more likely.

The courthouse has been sealed off and is heavily guarded. The city’s schools are to go to online learning from Wednesday in anticipation of the verdict.

Exhausted members of George Floyd’s family said that after the trauma of the trial, they want it to be over.

“We’re ready to get this trial done,” Tera Brown, Floyd’s cousin, told CNN. “It was very difficult. There were times when we were literally broken to tears.”