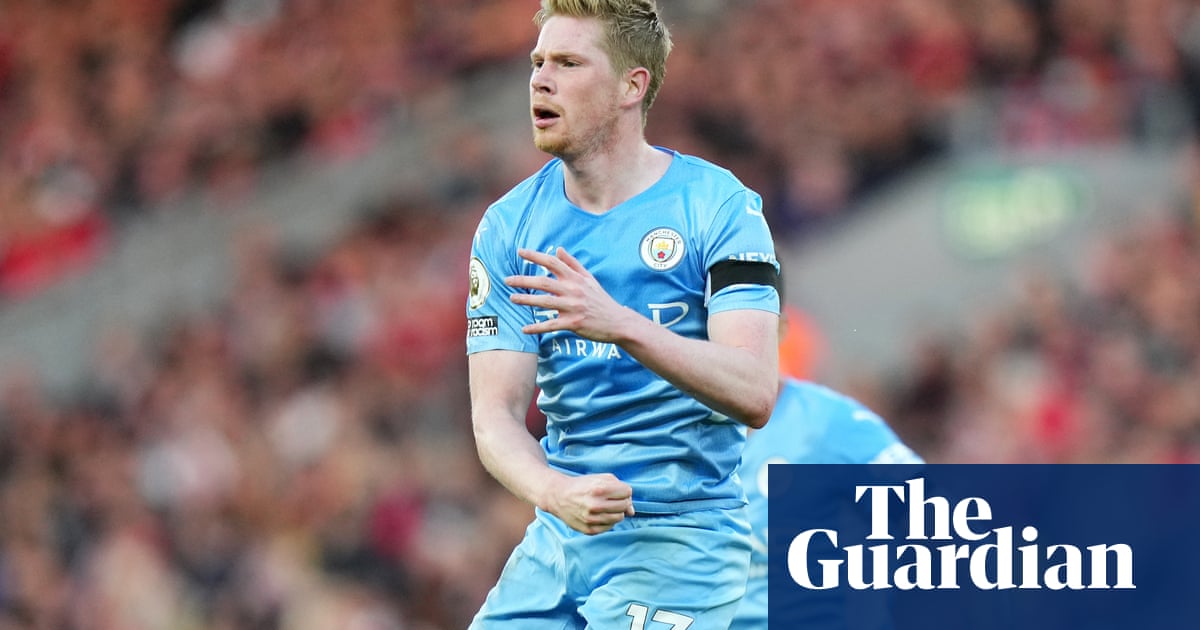 But Salah is in a rare groove of form and, after getting the position on Rodri, the way he rolled his studs over the top of the ball to trick past Bernardo Silva was balletic. Salah was not finished. Into the area, he went one way and then the other to bamboozle Aymeric Laporte in the tightest of spaces before slotting a finish into the bottom corner.

As the Liverpool support comprehensively lost their grip on the plot, a penny for the thoughts of ciudad de Manchester. They had just cancelled out Sadio Mané’s 59th-minute opening goal with one from the excellent Phil Foden and, having exerted almost total control over the first half, they might have felt that it was not to be their day.

But City were not finished. They refused to wallow and what shone through as they found a second equaliser was their champion courage as much as their ability. The goal was created by Foden and, when he pulled back from the left and Kyle Walker missed his kick, Kevin De Bruyne’s shot from the edge of the area deflected off Joël Matip to beat Alisson in Liverpool’s goal.

It was a game of the highest quality, a thriller between surely the two best teams in England and it nearly carried a late sting at both ends.

Primero, Rodri stretched into a saving block to deny Fabinho after Ederson had missed a Salah cross – the goal was gaping – and then Raheem Sterling, on as a substitute to the usual jeers, led a City break only to lack conviction. He passed to Gabriel Jesus when he might have driven on and shot. Jesus’s effort was blocked.

It had been impossible to see this fixture as anything other than a title‑shaper irrespective of the date and not only because it had served as such in the previous two seasons. Cuando Liverpool beat City 3-1 here in November 2019, it ignited a belief that they could end their long wait for the championship and, when City won it 4-1 last February, they knew that they were also on their way.

Hard and fast conclusions were tougher to draw on this occasion, although the draw did favour City. What was certain was that there was much to unpick, taking in Pep Guardiola’s false nine experiment with Jack Grealish, which did not work; the brilliance of both Foden and Silva and where City might be with more assured finishing.

From a Liverpool perspective, Alisson was instrumental in keeping them in the game before Salah brought his razor-sharp cutting edge. He supplied the assist for Mané – his third of the Liga Premier season – while the goal was his sixth, making him the competition’s joint‑top scorer.

Foden tormented James Milner for much of the occasion and City could be aggrieved that the Liverpool right‑back, who continued to deputise for the injured Trent Alexander‑Arnold, remained on the field until his 78th‑minute substitution.

When Foden outstripped him just after the half-hour on a run towards the area, Milner caught him and the winger went over. The contact was probably just outside the area so no penalty but there was bemusement when the referee, Paul Tierney, did not whistle even for a free-kick. As the last defender, Milner would have been on rocky ground.

Milner was booked for hauling back Foden before half-time and Guardiola was incandescent when the veteran upended Silva in the 74th minute. Guardiola waved an imaginary card with no little feeling. Tierney did not brandish a real one, although he did book the irate Guardiola shortly afterwards.

Guardiola did not care that Grealish had almost never played as a false nine and certainly not for City previously.

He just rolled the dice – it was pure Pep – and, although the most expensive British player in history struggled to adapt in the first half, City did not. All around Grealish, the players in sky blue won their duels, they were quicker in body and mind and they created the chances to have taken a decent lead into the interval.

City’s big chance of the first half followed an incredible piece of skill by Silva, who executed a 360‑degree spin that, at various times, took him past each of Liverpool’s three midfielders. Silva then darted back inside Fabinho and the centre-half, Virgil van Dijk, before playing in Foden. Alisson made a vital one-on-one save.

City had plenty of other openings before the break, with the pick of them being De Bruyne’s header from a Foden cross which he sent wastefully over and Foden being thwarted by Alisson after collecting a long Ederson ball.

The change in Liverpool upon the second-half restart was remarkable. It was as if a switch had been flicked, the energy pouring from them and, Sucesivamente, the crowd, who sensed a change in momentum. Jürgen Klopp’s players took up higher starting positions and they were simply more forceful.

Diogo Jota extended Ederson and Liverpool scored when Salah beat João Cancelo before ushering in Mané, whose acceleration was too much for Rúben Dias. Guardiola swapped Grealish for Sterling and Jesus created the equaliser, skating from right to left before playing in Foden, whose low finish bristled with power and precision. The seesaw late drama took the breath.