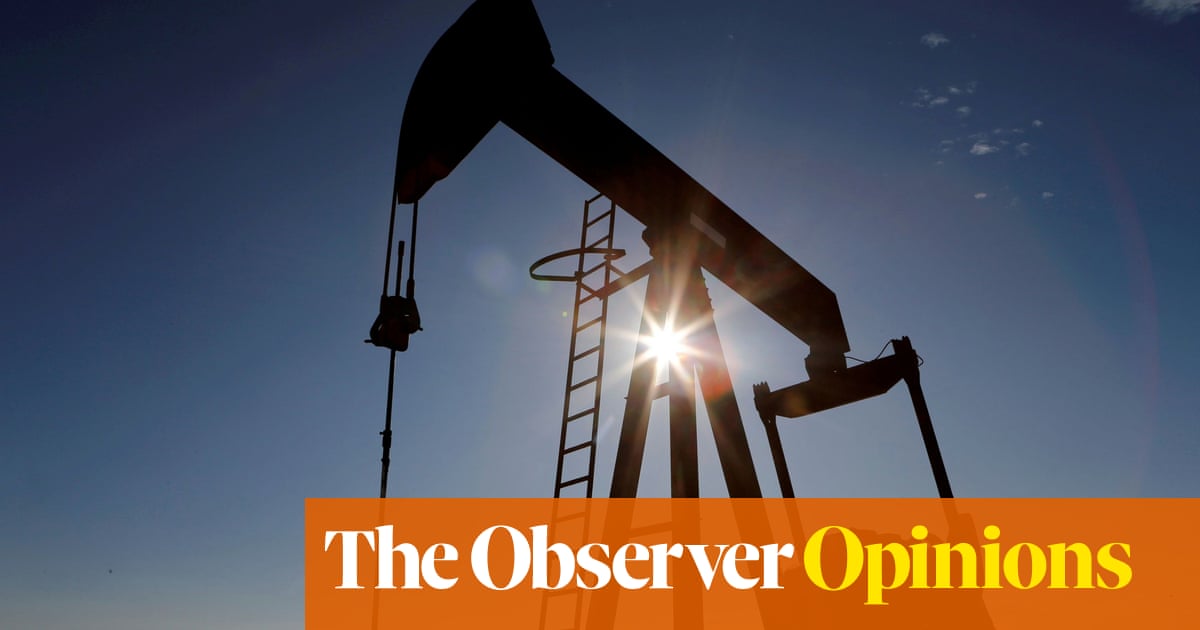 The phrase “data is the new oil” is the cliche du jour of the tech industry. It was coined by Clive Humby, the genius behind Tesco’s loyalty card, who argued that data was “just like crude. It’s valuable, but if unrefined it cannot really be used. It has to be changed into gas, プラスチック, 化学薬品, etc to create a valuable entity that drives profitable activity; so must data be broken down, analysed for it to have value.”

It turned out to be a viral idea: marketers, tech companies, 政府, regulators and the mainstream media went for it like ostriches going after brass doorknobs (as PG Wodehouse might have put it) and it rapidly attained the status of holy writ.

But it’s a cliche nevertheless and cliches are, as my colleague David Runciman once observed, “where the truth goes to die”.

Humby’s cliche, しかしながら, is also a metaphor – a way of describing something by saying it です something else and that should concern us. なぜ? Because metaphors shape the way we think and, as the philosopher George Lakoff 指摘した aeons ago, the best way to win arguments is to use metaphor to frame the discourse and dictate the language in which it is conducted. Thus American anti-abortion campaigners framed abortion as murder and the music industry framed filesharing as theft. And who’s in favour of murder or theft?

The metaphor that frames data as oil has similar manipulative power, as the designer Matt Locke pointed out in a terrific blogpost published the other day. The metaphor portrays public data “as a huge, passive, untapped resource – lakes of stuff that only has value when it is extracted and processed. But this framing completely removes the individual agency that created the stuff in the first place. Oil is formed by millions of years of compression and chemical transformation of algae and tiny marine animals. Data is created in real time, as we click and swipe around the internet. The metaphor might work in an economic sense, but it fails to describe what data is as a material. It’s not oil, これは 人.」

Spot on. And yet the current discussions about data policy, accelerated by antitrust actions and the experience of the pandemic, are all framing data as oil – “as a vast, passive resource that either needs to be exploited or protected”. Of course, some of this data-oil consists of what one might call objective facts about us, things such as date of birth, 性別 (though that’s now more problematic than before), credit card details, NI numbers, vaccination dates, postal addresses and so on. But most of the data on which the social media companies and their tracking associates now feast is inferred from monitoring our online activities and turning the resulting data into feedstock for machine-learning algorithms to create profiles of us that can be used for targeting advertising and other – sometimes manipulative – purposes. And all of these inferences are based on extracting this data from us on the basis of a fiction of user “consent” that may be minimally legal but is entirely uninformed.

The fossil fuels that were laid down by organic processes millions of years ago in the evolution of our planet have been extracted with the permission of property owners who claimed possession of the resources that lay buried beneath their domains (or demesnes). There was no perceived need to consult the planet in that transaction. But the oil-data that is mined by the tech companies is entirely the creation of humans and we were never consulted in any meaningful way about its extraction. And we’re not talking here about some passive resource that is just waiting for the right entrepreneurs to extract, refine and exploit it. 代わりに, it’s the transcript of our lives: our hourly activities, our banal conversations, our hopes, our fears, our likes and dislikes and the log of what we were thinking about at any moment.

It’s the text that cements a friendship or brutally severs it. It’s our response to the death of a beloved parent or the birth of a child. It’s our farewell message to the elderly mother who is dying of Covid, alone in an intensive care unit. It’s your response to chancing upon a photograph of a deceased friend in a Facebook feed. It’s the offer of a job or the email that terminates your employment. It’s the message that says “I’ve always loved you.”

And perhaps most intimate of all, it’s the record of your deepest secrets, for we know that people search on Google for information on things that they would never, ever tell another human being. It might be a search by a frightened teenager for information on abortion clinics, or by a teenager confused about her/his gender identity, or a depressed divorcee looking for information about suicidal feelings, or just a banal inquiry about where to buy waterproof jackets or Viagra. Given the unimaginable variety of humanity’s concerns, it could be about anything. But there’s one thing you can say for sure about the data that’s generated from logging and analysing these activities: it isn’t oil.

Covid lessons from history
There’s a very interesting piece on Statnews by Helen Branswell, a distinguished medical journalist, on how the pandemic might end.

Foolish business
Geoff Mulgan has an extended meditation on his blog about the astonishing inefficiency of many companies, based on his experience of ordering from Currys.

A New Marshall Plan?
Scott Galloway has written a brilliant post about how Joe Biden could learn from his country’s postwar efforts to rebuild a shattered world.