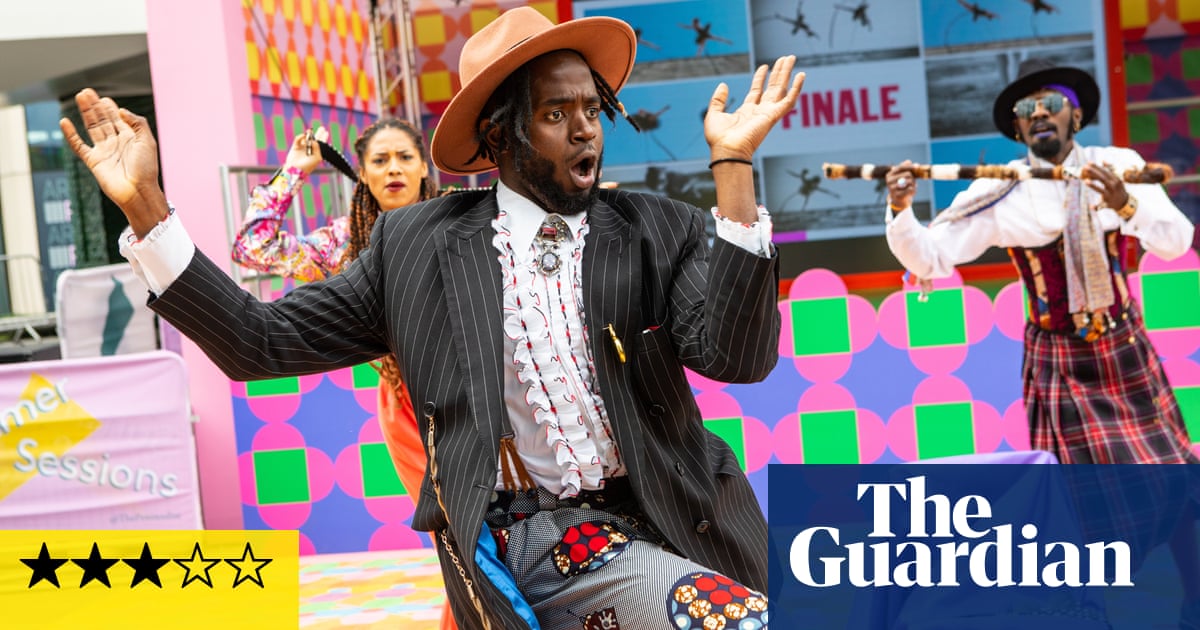 There’s a reason we normally trap audiences in dark theatres. There’s so much to distract the attention at outdoor dance events: the weather, the people milling about, hier, the backdrop of shiny new buildings and cable cars over the Thames. But the performances in Dance by Design, part of the opening weekend of Greenwich and Docklands international festival, in Londen, all have ways of cutting through the noise.

The three fantastical figures of The Lost Opera are clearly inspired by Bauhaus artist Oskar Schlemmer’s Triadic Ballet, their bulbous monochrome bodies made of spheres and cones. But these characters have speakers built into their costumes, so sound is emitted from bell-like sleeves and swings in and out of our auditory orbit as they move and spin. It’s pretty cool.

Continuing with snazzy costumes, Patrick Ziza’s Dandyism presents the style of Congolese sapeurs, outrageously well-dressed men (and women), often defying their circumstances in dandyish fashions, sharp suits, hats and canes and a riot of colour. There’s a deeply political subtext to the subculture (which emerged under colonial rule) and Ziza’s infectiously energetic quartet show a dance of personality, identity, pride and playfulness, with high-stepping footwork, gentlemanly gestures and a lot of fun and funk.

Catalan company Delrevés stages a real coup de théâtre. Two women in white tutus appear on top of a nearby building then suddenly throw down their ropes and start to abseil down the side, on pointe, bourréeing their way along the sheer surface as serenely as any classical swans. It’s like Trisha Brown’s 1970 piece Man Walking Down the Side of a Building but with toe shoes and Tchaikovsky. With the pair poised in parallel to the ground, about seven storeys up, the physics of it is a delight: their grand jetés like leaping on the moon, their version of Swan Lake’s cygnet dance played out in slow motion.

Op 'n punt, a flock of birds swoops past. Are they thinking, why are those humans trying to fly like us? Of, what strange things they do to entertain themselves? These unexpected flights of fancy are a welcome disruption to the everyday order of things.