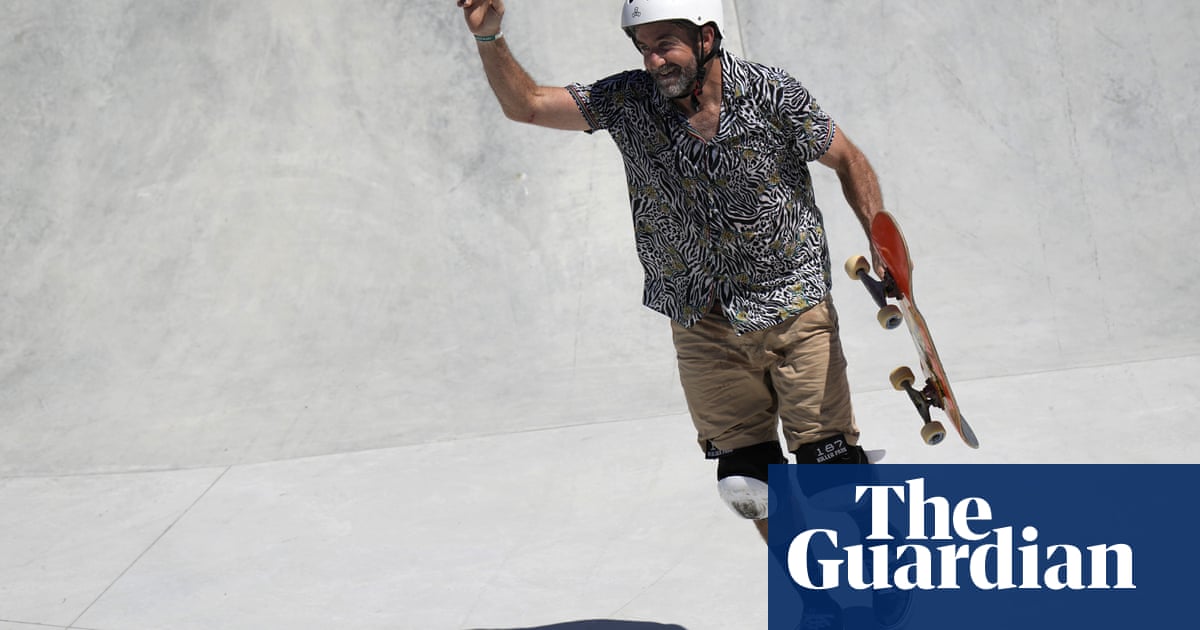 A few minutes after he had finished skating in the Olympics, Dallas Oberholzer, 46, from Durban, South Africa, launched into a story about the time he was nearly eaten by a jaguar while he was travelling in the Amazon.

“I was driving a little jeep and I got stuck in the mud, I tried putting my skateboard under the wheels but that didn’t work, so I was looking for some wood and I walked off and found this little hut down the track. There were white droppings outside so I knew there was a meat-eater around and then when I walked in the door I saw this jaguar and oh, shit, this was clearly its lair, so I let rip, roared like some Tarzan crazy man, to let the thing know I was something to be reckoned with, and luckily it bolted out the back. So I just stood there and thought: ‘Oh shit that thing could have killed me, and then: ‘Oh shit, I’m glad I’ve seen it.’ And then I walked 5km to the road to hitch a truck to come pull me out of the mud.”

Oberholzer says he has never had a proper job. But he does have a lot of these stories. He is thinking about putting them down in a book. There’s the one about paragliding off the sugar loaf mountain. And the time he worked as a chauffeur for Janet Jackson. And the other when he walked into a Zulu village, stony broke but with his skateboard, and started teaching tricks to the kids. “They liked it so much they ended up giving me a piece of land, and if I didn’t have that I would probably be on the streets.” He still lives there, off and on, “I’m the only white person for a 30km radius and the rest of South Africa thinks I’m crazy.”

Now Oberholzer has the tale about the time he competed in the Olympics, too. He said it’s as good as any of them. “Oh for sure, man, especially at my age, and given how unexpected this all was, I mean, I’m only here because I heard this was coming around about six years ago, and I thought to myself: ‘well I’ve got nothing else to do, so let’s stick it.’” He finished last in his heat. He didn’t care.

Oberholzer, who has a salt and pepper beard, and was wearing a Zebra print shirt (“my same old rig”), demonstrated a slow, leisurely style of park skating, which felt like something from another era when it was set next to teenage acrobatics of the kids he was competing with. The winner, Australia’s Keegan Palmer, is 18. “At my age I’m not going for gold,” Oberholzer said, “It wasn’t like: ‘Oh my God it’s the Olympics’, it was just another fun skate session. I’m out there acknowledging other people’s successes. And I’m used to hanging out with 14-year-olds, they’re like my skateboarding family.”

When Oberholzer was that age himself, he never imagined skating would take him to the Olympics. “It was taboo, it was frowned upon, it was a waste of time,” he says. “When I chose skateboarding over mainstream sports everybody would look at me like a freak, well skateboarding was a bit of a freak show, so that became my safe space.” Even now, he says, people still say to him “dude, you’re still skateboarding? Really?”

He wasn’t quite the oldest man in the field. That was Rune Glifberg, from Denmark. Glifberg, a legendary figure in the sport in the 1990s, came out of semi-retirement to compete here, and had the honour of being the first man to drop in. “When I started skateboarding, being part of the Olympics was probably one of the most uncool things you could do,” Glifberg said, “I think the last Olympics I paid attention to was ‘84 in Los Angeles. But we’re in a different spot now. It’s great to see skateboarding on this world stage, and I’m super happy to show the world that skateboarding is here, and it’s a beautiful thing.”

Glifberg seems a little conflicted about what being in the Olympics will mean for his sport. “I think unfortunately we’re going to see a little bit of a divide in the future, not for the worse, but a small percentage of skateboarders are going to be more focused on competing and skating the Olympics,” he says.

For him, “skateboarding in its true form isn’t about competition, it’s about the camaraderie and friendship,” he was happy they were able to show some of that this week too. But “it’s also about people from all walks of life being out there in the streets skateboarding, skinning their knees, blood running down their arms, battling security guards, jumping fences, and doing what we do. And that part of skateboarding is going to survive. Next week, those people aren’t going to be thinking about the Olympics.”

Oberholzer understands. “Rune and I, we’re the guys who stuck it out,” he says, “and we’re both happy to represent the older generation and make sure skateboarding is remembered for having a mixed bag of misfits,” Oberholzer says. He doesn’t think anyone in their 40s will skate in the Olympics again. Looking at the way the sport is already changing, “I think you’ll be lucky to make it here in your 30s.”

He couldn’t quite believe some of what he’d seen this week. “The Americans, shit, have you seen the crews they’ve got? They’re like eight deep. They’ve got physios. Please, I’m stumbling around with my pads in my laundry bag because I’ve got so much shit to carry. But that’s what I’m used to. I’m used to being the lone ranger.”

But Oberholzer doesn’t think those changes are a bad thing. “The guys who want to keep it raw and dirty and under the bridge will always be there, but the Olympics means more opportunities, more endorsements, more government support,” he says. And that means more participation, which is what he really cares about. These days Oberholzer is channelling his energy into his non-profits he founded, the Indigo Youth Movement and Indigo Skate Camp, which runs youth intervention and after-school skate programmes for underprivileged kids. He’s become a great advocate for what his sport can do.

“Growing up in South Africa of course we all went to separated schools,” Oberholzer says, “and the only time we actually got to mix-up in the streets with other cultures and races was on our skateboards. My first friends who were of colour were the ones I met rolling in a plaza, and I’ve kind of stuck with that. I think right now skateboarding is the most integrated activity in South Africa, and it’s high time the government embraced it. There’s no need for racial quotas in skateboarding. It’s naturally the way it is. I know my successors will be of colour, and I know they will be here soon.” He does, because he’s teaching them himself. If he’s back at Paris in 2024, it might be as the head of their national federation.

It will be good to catch up with him again then, if we both make it. I’m not sure I’ve ever met an Olympian quite like Oberholzer before. I’m not sure anyone has.