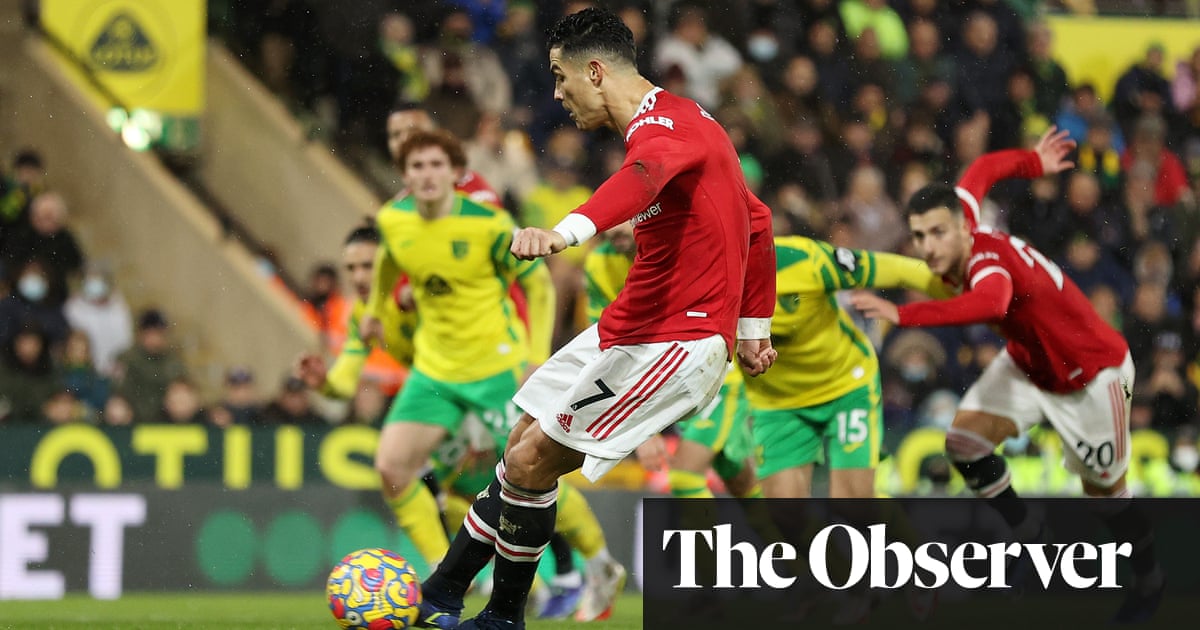 It was not pretty. It was only just effective. It was Cristiano Ronaldo. Ralf Rangnick’s temporary tenure continued in the right vein points wise, but the performance at a sodden Carrow Road posed more questions than answers.

예, they dominated possession. But until Ronaldo’s late penalty, it was depleted Norwich – bottom of the table – who pressed more effectively, who looked sharper, who looked perhaps the likelier of victors. Plenty of training ground work to do.

Dean Smith will take pride in the performance but an inability to score continues to hamper them. Ten times now they’ve failed to net in the 프리미어 리그 this season.

Norwich’s already daunting task was made harder by a series of absentees. Five changes in total, of which three were enforced. All of those came to the division’s most porous defence, with the ineligible Brandon Williams joined in the stands by centre-back duo Ben Gibson and Andrew Omobamidele. Five at the back became four, and in came Ozan Kabak and Dimitris Giannoulis. Przemyslaw Placheta and Joshua Sargent were both included as pacy attacking outlets. The answer to how one solves a problem like no Emiliano Buendía is, seemingly, still not Todd Cantwell.

If United’s start against Crystal Palace last week was Oxford Circus at rush hour, the opening here was more mid-morning at Cromer. And that suited Smith just fine. Too many sloppy touches from those in red, including one that allowed Teemu Pukki to burst down the right and win an early corner. Up went the volume.

The visitors almost took the lead with their first meaningful opportunity. Grant Hanley was penalised for a foul that was, let’s say, soft, on Marcus Rashford. From the right-hand edge of the penalty area, Telles completed his ball kissing ritual (it supposedly energises the leather) before clipping a free-kick on to the bar via Sargent. Tim Krul may have got the faintest of touches but not more than the asteroid that supposedly brushed the earth mid-afternoon.

The half’s biggest roar came when Ronaldo attempted an audacious left-foot volley, only to completely miss his kick. That noise was matched when he subsequently fouled Hanley in a failed attempt to save face. But it came at a cost. Hanley – a man mountain of a defender – lay crumpled. He tried to run it off but lasted just a few minutes more.

On came utility man Jacob Sørensen, slotting into an already depleted defence. Not that the Dane was fazed; faced with a series of circa-2005 stepovers from Ronaldo, he simply watched, waited and nipped the ball away.

United continued to dominate possession, Bruno Fernandes yearning to make things happen; largely though, he found touch. Ronaldo twisted and turned to get a left-foot effort away that Krul parried, before, on the stroke of the interval, Krul scrambled backward to tip over Harry Maguire’s looping header.

For all the talk of McFred, Lukas Rupp was the standout midfielder, a constant disruptor for Norwich. He had their best chance of the half too, mistiming his jump and heading Sørensen’s cross tamely at David de Gea. East Anglian belief, 그러나, was growing.

And by osmosis that transferred to those in yellow. Immediately after the restart, Placheta – who, along with Max Aarons, the last-man standing from Smith’s first choice backline, was giving Telles plenty of discomfort down the right – shot straight at De Gea after wriggling his way into the box.

Rangnick, sporting a red baseball cap to shield him from the unrelenting rain, stood poker-faced on the touchline. That served only to expose him to the ever-increasing decibel level. Every home tackle, every interception was greeted as a goal.

Those have been rare for Norwich this season but a rasping 18-yard left-foot effort from Pukki, who found his feet after being fed by Rupp, almost brought one. At full-stretch, De Gea pulled off a magnificent one-handed stop.

Then came the heartbreak. Scott McTominay clipped cross saw Ronaldo – who else – go down, Aarons’ arm around his neck. Darren England pointed to the spot and the penalty winner, turned penalty scorer. Emphatic.