Cristiano Ronaldo held Juventus back: just what is it that Manchester United see in him? 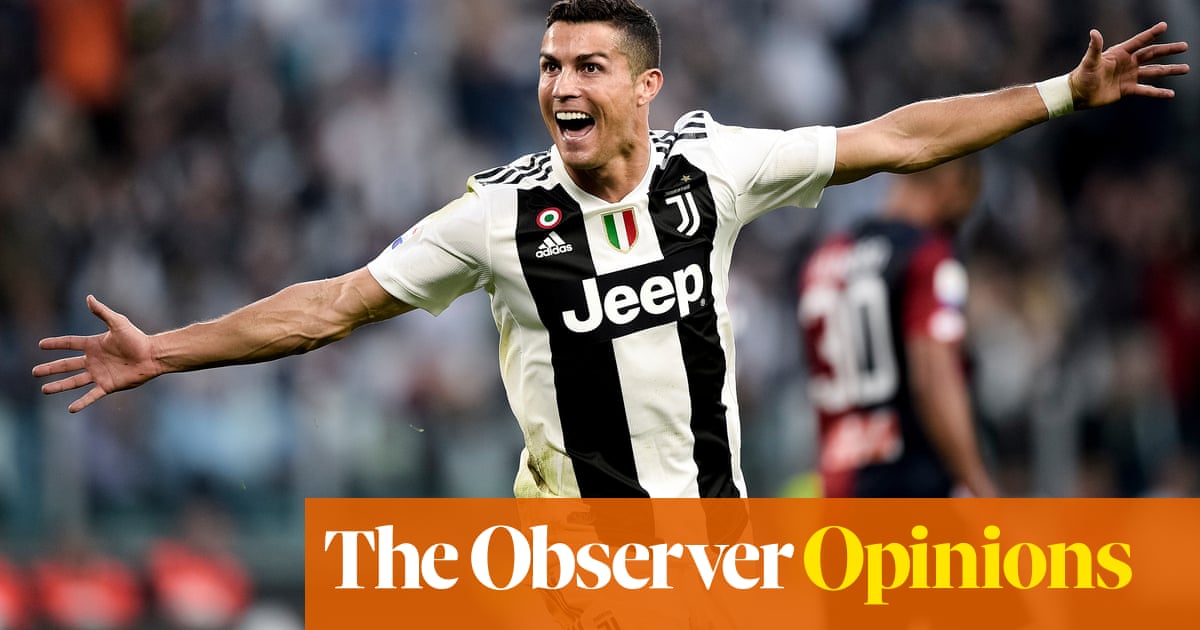 Welcome to Unitedland! With an array of nostalgic installations and familiar faces, there’s something for everyone to enjoy! Gawp at the scorer of the winning goal from the 1999 Champions League in his very own technical area! Gaze on the goalscorer from the 2008 Champions League final grazing just outside the penalty area! Even the roof has that retro feel! Season tickets start at just £532.

There was a time when clubs found jobs for former players gladhanding in corporate hospitality. Manchester United have gone much further. With Ole Gunnar Solskjær installed as manager and Cristiano Ronaldo up front, you wonder which other former greats can be brought back to the Old Trafford theme park. Martin Edwards in the boardroom? Gary Bailey back in nets? The toothpick-chewing ghost of Billy Meredith on the wing? A labyrinthodon who once roamed Newton Heath let loose on the shabby concourse?

Of course there is an appeal in bringing back a former great – even one who until lunchtime on Friday seemed perfectly happy to join their cross-city rivals. Equally there is an appeal in seeing a popular former star dressed in the manager’s suit, even if he does quite often end up looking sad in press conferences. But that fondness clouds the judgement – as is made clear by all those delighted tweets celebrating the return of the king. It’s no different to all those unwilling to contemplate criticising Solskjær on the grounds that outsiders can’t understand what he means to United fans. Perhaps not – although all clubs have their heroes – but that doesn’t make him a good manager. Wishful thinking may bump up the share price, but it never won trophies.

There may even be celebration that United have pinched Ronaldo from City, just as there was when they swooped to prevent Alexis Sánchez moving to the Etihad – and look how that worked out. Infatti, Ronaldo is so unsuited to City, who seemingly were only ever interested in a free transfer for all their apparent need for a central goalscorer, as to raise the mischievous thought that this has worked out rather well for them, saddling a rival with an ageing player who will drain resources and disrupt tactical development. Call it the Alexis Sánchez Protocol.

United’s need is for a central midfielder to link the two halves of the side. They have apparently held back on an attempt to sign Declan Rice for financial reasons having already spent £115m in landing Jadon Sancho and Raphaël Varane. So why now is money – £20m fee plus £20m a year salary – suddenly available for a sentimental indulgence? And what does this mean for Mason Greenwood, who after excelling in the opening game of the season, suddenly sees an additional and expensive obstacle between him and regular first-team football? United’s future is in danger of being blocked by the ghosts of its glorious past.

Three years ago, Juventus paid £100m for a 33-year-old and gave him a basic salary of £26.6m a year, a deal that must now rank as one of the worst in history. Ronaldo was signed to take Juventus, who had lost in two Champions League finals in the previous four seasons, to European glory. Instead they lost in the quarter-final to Ajax, then in the last 16 to Lyon, then in the last 16 to Porto. Juve had won seven scudetti in a row before Ronaldo arrived. They won it again in their first two seasons with him, but finished fourth last year. He may have scored 81 league goals in three seasons, but Ronaldo made Juventus a worse football team.

And not only has his relative immobility, his reluctance to contribute to the press – he was in the bottom 2% of forwards across Europe’s top five leagues in terms of pressures per 90 minutes last season – held Juve back tactically, but the money spent on him has weakened the rest of the squad. There’s a reason Juve were so willing to offload him now.

Ronaldo will, almost certainly, score goals, but goals weren’t a particular problem for United. Last season they were the second-top scorers in the premier League, and scored more than anybody else in their Champions League group, but still finished third. They already have a highly gifted thirty-something goalscorer in Edinson Cavani. Their problem is constructing the attacking moves that can overwhelm stubborn defences. Ronaldo will not help with that. In fact it’s hard to see how he will fit tactically; United have admitted they never expected Juve to sell and so he was not part of their plans.

But Ronaldo is content – more than a million retweets of the confirmation of his signing in the first hour – and elite clubs these days are first and foremost content producers. This is Paul Robinson coming back to Neighbours or Dirty Den returning to EastEnders. It’s great for the narrative. There will be heightened interest. Social media engagements will go through the roof. Ed Woodward will get to churn out impressive-sounding numbers on the shareholders’ conference call. Devising and implementing a philosophy is boring. It takes ages.

Put a plan in place now and it could be years before it comes to fruition. Far easier to sign a big name for the immediate dopamine hit that leads to inane talk of winning the transfer market, and is why many fans seem more excited by signing players than winning football matches. There are those who see Juve’s signing of Ronaldo as indicative of Serie A regaining its mojo; on the contrary, it was emblematic of its decadence, a superclub being lured onto the rocks by the siren call of celebrity.

Celebrity in football is the enemy of coherence – and in modern football coherence is what denotes the very best from the rest. Perhaps United fans will simply be happy to be reminded of more successful days, but it’s hard to see how Ronaldo takes them any closer to mounting a serious title challenge. Rather this is a whimsical signing that fits the pattern of short-term crowd-pleasing that has characterised much of the eight years since Alex Ferguson retired.

Nothing has been learned and United look doomed to drift on amid the shadows of their past greatness.

The Democrats have no plan. Di mercoledì, just over a week after Politico published a leaked draft of Justice Samuel Alito’s forthcoming majority opinion in Dobbs v Jackson, which will overrule Roe v Wade next month, ...

Nel 1936, during the first heady months of France’s new Popular Front government, a Parisian schoolteacher coined the phrase that symbolised the hopes invested in it. “Tout est possible!" (Everything is possible) wrote...