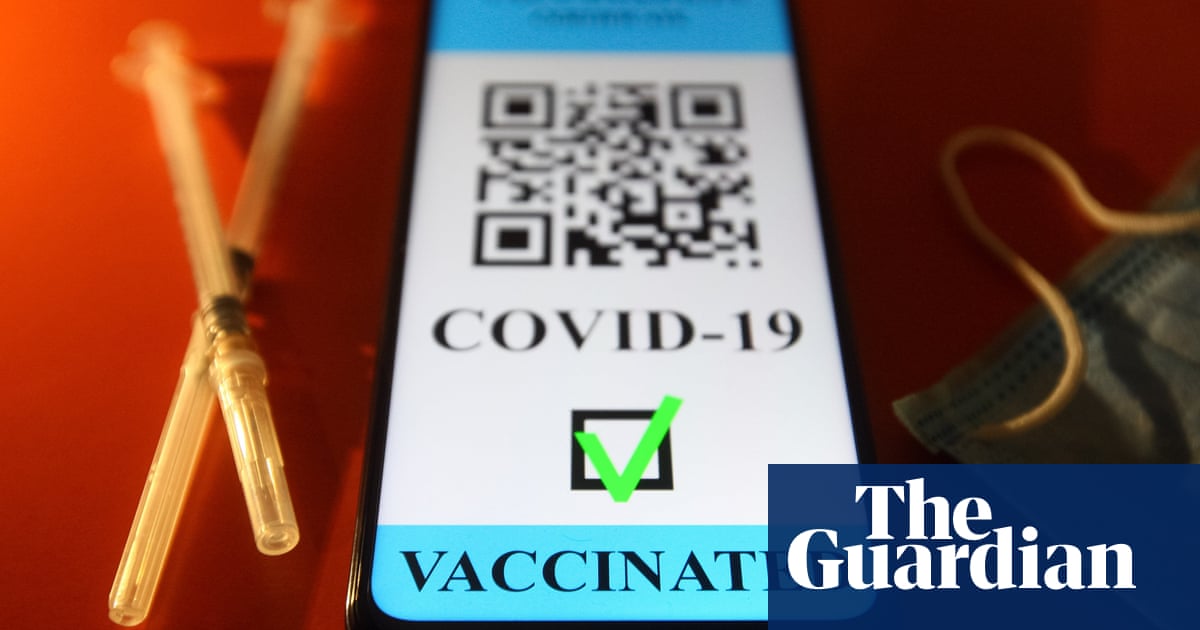 Covid-status certificates being considered by ministers to help open up society could amount to unlawful indirect discrimination, the government’s independent equalities watchdog has advised.

As ministers decide whether the documents should be introduced as passports to certain events later this year, the Equality and Human Rights Commission has told the Cabinet Office they risk creating a “two-tier society”.

The watchdog also said employers should not be allowed to hire workers on a “no jab, no job” policy until all young people have been offered a vaccine, and said plans to make them mandatory for care workers helping older people may not be lawful.

According to a submission seen by the Guardian, the EHRC said Covid-status certificates could be a “proportionate” way of easing restrictions, given the toll lockdown has taken on people’s wellbeing and livelihoods.

But it said they risk further excluding groups among whom vaccine take-up is lower – including migrants, those from ethnic minority backgrounds and lower socio-economic groups – from access to essential services and employment.

“There is a risk of unlawful discrimination if decisions taken in this process disadvantage people with protected characteristics who have not received, or are not able to receive, the vaccine, unless they can be shown to be justified,” it said. “Any mandatory requirement for vaccination or the implementation of Covid-status certification may amount to indirect discrimination, unless the requirement can be objectively justified.”

The warnings emerged as the health secretary Matt Hancock gave the clearest indication yet that care workers will be required to have a vaccination or be refused deployment in care homes.

Launching a five-week consultation on the proposal, the government said the initiative could later be extended to the wider health and social care workforce. “Due to the importance of this issue, we intend to change the law quickly,” it added.

Despite care workers being in the highest priority category for jabs, Hancock said only around half of care homes in England have enough people vaccinated. Government scientific advisers believe 80% of staff and 90% of residents need to be vaccinated to provide a minimum level of protection against outbreaks of the virus.

Senior government figures had for months denied that any form of “vaccine passport” for domestic or international use would be introduced as the rollout of jabs got under way in the winter. But at the end of February, Boris Johnson announced a review would be launched into the idea to explore the complex ethical issues behind it. He touted the documents – that would be used to prove someone’s vaccine, test or antibody status – as a possible requirement to enter a pub or a theatre.

Since then, an interim report from the Cabinet Office review has ruled out the documents ever being necessary on public transport or in essential shops – though the government has declined to provide any definition of these. It has expanded access to testing in England this week, by offering everyone two lateral flow tests a week – a measure it would argue means the certificates would be available to beyond just those who have been vaccinated.

Johnson faces the prospect of a significant Tory rebellion if he pushes ahead with introducing the certificates and calls for a vote in parliament, with 41 Conservative backbenchers vowing to oppose them. Labour has previously vowed to vote against “vaccine passports” but has been less clear about its stance on a wider certificate scheme used to show someone’s vaccine, test or antibody status – saying it is still waiting for the government to formally present a firm proposal.

Responding to the government’s call for evidence on Covid-status certificates, the EHRC said that if they were introduced, it should only be for a limited time and subject to regular review, along with “strict parliamentary scrutiny”.

Care home operators are divided on mandating jabs. Barchester, one of the largest private operators, has already said it will make vaccines a condition of work, starting as soon as 23 April. Its chief executive, Pete Calveley, said: “It is a professional duty for care home staff to accept the vaccine unless there is a medical reason they should not.”

Other operators fear it will drive away staff in an already depleted workforce and that it is unreasonable to only mandate vaccines for care workers and not NHS staff.

The government has previously acknowledged the legal difficulty of mandating vaccines. In February, the prime minister’s official spokesperson said: “Taking a vaccine is not mandatory and it would be discriminatory to force somebody to take one.” Robert Buckland, the justice secretary, has also said he believes mandating vaccines in existing staff is likely to require testing in the courts.

Employment lawyers said on Tuesday that the rule could breach the Human Rights Act and amount to indirect discrimination, if refusal was related to religious belief for example, and it was likely to be tested in the upper courts.

“There would have to be a very strong justification that mandating vaccines really does put a dent in the Covid case numbers,” said Ryan Bradshaw, employment and discrimination lawyer at Leigh Day.

The government wants to make vaccination of carers part of the “fundamental standard” of providing safe care, enshrined in the Social Care Act. Care homes which fail to show their staff are vaccinated could, in the most serious cases, have their registration to operate cancelled.

Unison, a health worker trade union, described the plan as “the wrong approach” and called for persuasion – rather than coercion – of care workers, many of whom have cited fears, albeit so far unfounded, that the vaccine could affect pregnancies. Others have cited religious concerns while practical issues of not being on shift when GPs arrived to deliver doses have also been highlighted.

With the vaccine rollout in England now being extended to those in their late 40s and the government not promising to offer all those over the age of 18 a jab until the end of July, the EHRC said employers should not be able to discriminate when looking to hire only those who have been vaccinated. It advised: “The implementation of any policy would need to reflect the status of the vaccine rollout programme and ensure that it does not discriminate against younger people, who are unlikely to be vaccinated until later in the process.”

A government spokesperson said: “Covid-status certification could have an important role to play both domestically and internationally, as a temporary measure. We are fully considering equality and ethical concerns as part of our ongoing review.”