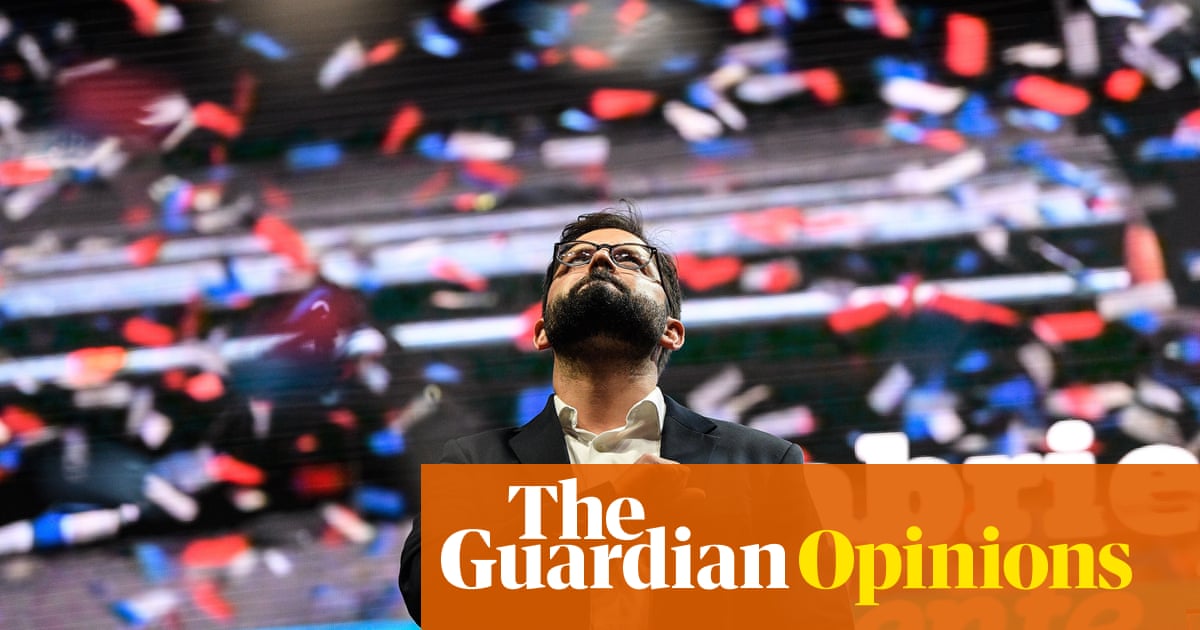 Chile always gave the lie to the cold war claim that the United States stood for democracy. When its voters in 1970 showed the temerity (“irresponsibility”, Henry Kissinger called it) to elect socialist Salvador Allende as president, Washington helped orchestrate the coup that toppled him, and backed the resulting dictatorship.

It seems those “irresponsible” Chilean voters are at it again – on Sunday, they elected leftist Gabriel Boric as president by a 12-point margin, on the back of a campaign for a new constitution. But if Chilean democracy seems on the road to recovery from its Washington-backed disfiguration, prospects for democracy in the United States look rather bleak.

Sunday also saw Joe Manchin brandish the veto power the US system grants a senator representing fewer than 300,000 voters to tank the agenda of a president chosen by 80 million. And that was but the latest reminder that Americans are not governed by the democratic will of the citizenry. The US supreme court looks ready to strike down abortion rights supported by about two-thirds of the electorate, while Democrats in office seem unable or unwilling to deliver on basic social programs supported by a majority of voters, whether on drug prices or childcare or public health, and much more – or to prevent Republicans brazenly reengineering state-level laws and procedures to prevent voters of color from ever again making the difference they made in 2020.

Minority rule is a feature, not a bug of the US constitutional system.

Donald Trump was legitimately elected president in 2016 despite losing by 3m votes. And 6 January notwithstanding, the Republican party needs no coup to lock itself into power for the foreseeable future, even if it represents a diminishing minority of voters. The US constitution provides all the tools they’ll need: the electoral college; the US Senate (two seats per state means it can be controlled with less than 20% of the national vote); the supreme court the Senate effectively picks; and the state houses empowered to set voting laws and rules, and even redraw districts to partisan advantage.

The framers of the constitution never intended that every American would have a vote, much less a vote of equal value. They created a system to regulate a society ruled by and for wealthy white male settlers engaged in the conquest and subordination of the country’s Indigenous and Black populations.

Decades of bitter struggle on the streets have won Black and Brown people far more access to the US political system than the founders ever intended. Still, even the gains codified in the civil rights era are being consciously rolled back by a billionaire-funded white nationalist party looking to cement its hold on power for the foreseeable future against any demographic headwinds.

Ineffectual appeals to “save our democracy” reflect the paralysis of mainstream Democrats in the face of the Republican offensive that has weaponized a minority-rule constitutional system.

Nor is a majority of citizens easily able, within its rules, to change these anti-democratic provisions of the US constitution: even minor changes require agreement by two-thirds of each house of Congress, and three-quarters of the 50 states.

Democratizing the United States – creating a system of government shaped by every citizen having the right to a vote of equal value – would require a different constitution, democratically adopted by a national community quite different from the one imagined by the founding fathers. But that’s what Chileans are attempting.

Boric is a product of a student rebellion a decade ago that fed into a broader social justice movement focused on issues ranging from austerity, a failing social safety net, healthcare and economic inequality to gender violence and Indigenous rights. While even center-left governments were stymied from delivering on voter expectations, many in this parliament of the streets recognized that their grievances were products of the democracy deficit built into the dictatorship’s 1980 constitution to ensure continuity of its economic model.

Although it allowed Chileans to elect their president and lower house of parliament, that constitution built in minority vetoes, such as appointing one-third of senators and much of the judiciary, as failsafe mechanisms to prevent democratically elected politicians from enacting the systemic changes demanded by voters. Thus the emergence of a democracy movement based outside formal political parties, which in late 2019 won a referendum to have a new constitution democratically drafted. That movement’s energy also propelled Boric to power.

So, does Chile have lessons to teach US progressives? It’s a question worth investigating. Sure, the US is nowhere near a point where public opinion recognizes the need for a new constitution. But it’s equally clear that the US fails as a democracy – and the morbid implications of US minority-rule-with-a-democratic-face can’t credibly be avoided.

Curiously enough, US conservatives have never been shy to follow Chilean examples: the shrink-government campaign that began in the Reagan era was road-tested by Chile’s dictatorship under the tutelage of US “free-market” ideologues. And President GW Bush, in his 2005 effort to privatize social security, cited Chile as the model to emulate.

But the Chilean popular rebellion against that same neoliberal model, and the potential it has raised for a democratic reordering of power and of that country’s social contract, suggests that the right are not the only Americans who may have something to learn from Chile.