Cork’s annual festival makes an invigorating return to presenting large-scale performance with a production that involves 11 dancers, four onstage musicians and three opera singers. In The Wanderer (★★★★☆) a partire dal Irish Modern Dance Theatre, an international cast traces multiple journeys by migrants across continents. Choreographed by John Scott against a background of globe-spanning projections by dance film artist Jason Akira Somma, the dancers weave intricate paths, cleave together and fall apart; switching from propulsion to entropy. Poet Jessica Traynor’s text presents a dense collage of voices: from interviews with the dancers about their stories of migration and homesickness, to literary reflections on exile.

Tom Lane’s score for voice, strings and delicate piano is similarly allusive, with echoes of Max Richter as well as the lonely wanderer from Schubert’s Winterreise. In the final movement, “A Woman and Death”, soprano Mairéad Buicke is lifted from her hospital bed and cradled by the dancers. If at times a desire to make a universal statement on the plight of refugees dilutes the particularity of individual experience expressed in movement and voice, its flashing moments of beauty and yearning ensure that this ambitious production makes a lasting imprint.

Enveloping visual imagery is central to director Geoff Gould’s production of writer and actor Irene Kelleher’s new play, A Safe Passage (★★★☆☆), for Blood in the Alley Theatre Company. As two characters are holed up in a lighthouse on a stormy New Year’s Eve in 1979, the designers’ video projections of waves crashing around them become increasingly significant to the unfolding narrative. The encounter between a curmudgeonly lighthouse keeper, Christy (Seamus O’Rourke) and a mysterious young woman (Irene Kelleher) dressed in gothic black begins in comedy and intergenerational misunderstanding.

Over three decades, Corcadorca have used locations around Cork to thrilling effect in their site-specific performances. For their latest production, Guests of the Nation (★★★☆☆), their instincts seem to have faltered. The opening scene played on the balcony of the auditorium in Cork Opera House is followed by the audience’s leisurely walk through the city centre to Triskel Arts Centre, by which time dramatic momentum is difficult to recover. La solitudine e l'ambizione di Nicholas sono in contrasto con le scene in cui lo stesso Khan si esibisce davanti a un pieno di fan acclamanti, this loose adaptation by novelist Kevin Barry of a celebrated short story from 1931 by Frank O’Connor comes across as a work-in-progress.

Set during the Irish war of independence in 1919, O’Connor’s short story portrayed the relationship that developed between two pairs of combatants on opposite sides of the conflict. When the Irish Republican soldiers receive orders to execute their two English hostages with whom they have developed a rapport, they all face stark reality.

Here the four characters are played by female actors: Amy Conroy, Liz Fitzgibbon, Gina Moxley and Chloe O’Reilly, highly committed and stiff-limbed. Barry’s script opens up the tightly wound text of the original story, adding dark, anachronistic banter and an additional layer of violence. While posing currently pressing questions about what people are capable of doing in the extremis of war, in this uncertain, somewhat disjointed production it seems as if Barry, director Pat Kiernan and composer Mel Mercier are still experimenting with ideas. 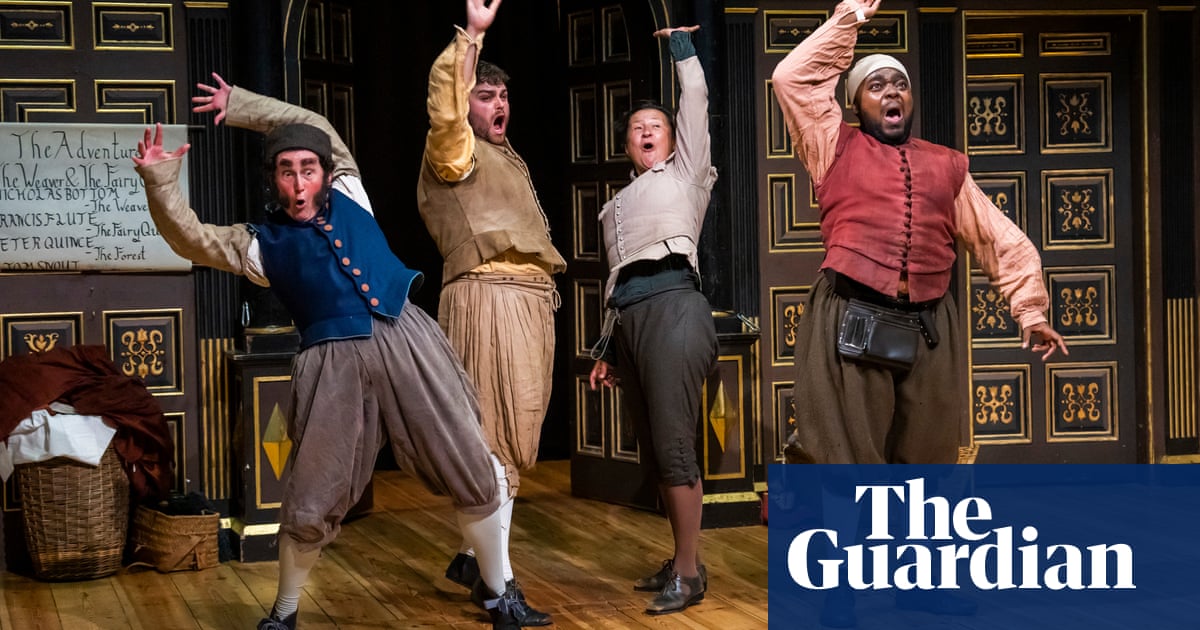 Last summer, Shakespeare’s Globe reopened after its pandemic closure with a party-popper version of A Midsummer Night’s Dream, featuring water pistols, a piñata donkey and a deliriously funny Pyramus and Thisbe. Questo ...