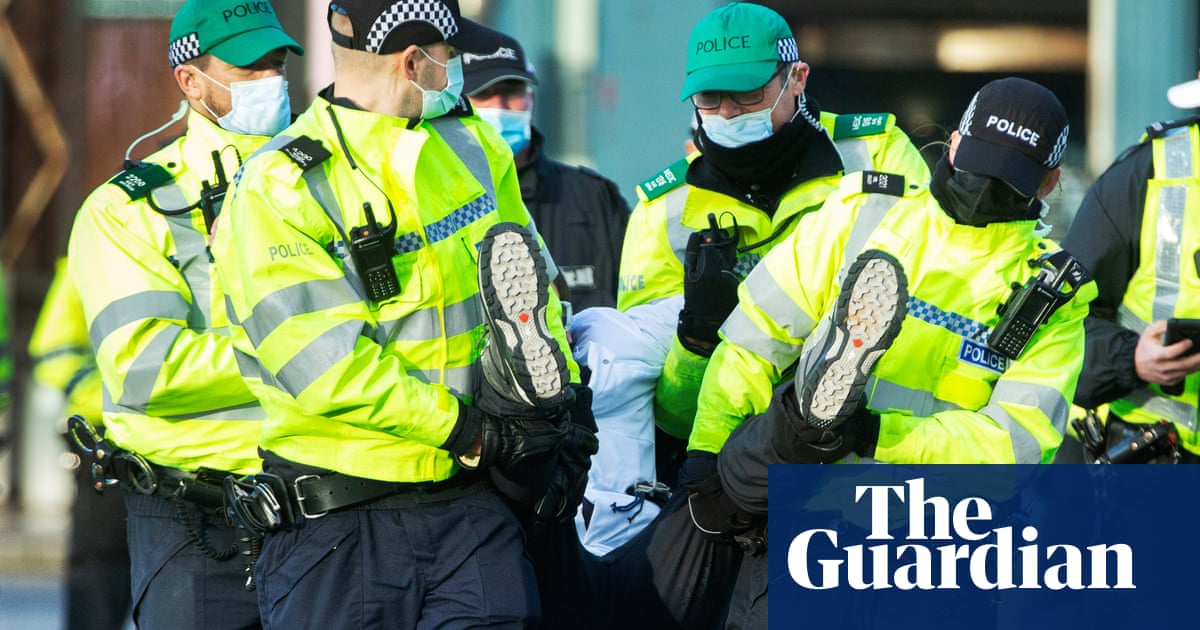 Accumulo di episodi di intimidazione da parte della polizia, harassment and aggression towards activists at Cop26 are creating “an atmosphere of fear and repression” on the streets of Glasgow and have had a chilling effect on protest, campaigners and monitoring groups have said.

Organisers of Saturday’s Climate Justice march through Glasgow have also claimed that police risked “chaos” by failing to adhere to agreed arrangements, while Scottish immigrant groups and indigenous visitors have described their feelings of discomfort and threat prompted by “saturation policing” throughout the city.

The Guardian has collected first-hand accounts from activists across Glasgow, who have reported:

Kat Hobbs, of the Network for Police Monitoring, disse: “Police Scozia seem to have gone for a saturation approach to policing the Cop26 protests, and with so many officers and little for them to do, reports are flooding in of police intimidation, harassment and aggression. All of these small incidents add up to create an atmosphere of fear and repression, and have a chilling effect on the right to protest.”

These reports stand in stark contrast to Police Scotland’s repeated insistence that policing of protests would be “human rights-based” and “welcoming, friendly and proportionate”.

The assistant chief constable Gary Ritchie said officers had “enjoyed very positive engagement and constructive relationships with the vast majority of people” who had come to Glasgow to “have their voices heard and engage in peaceful protest”.

There is a view among some activists that mutual aid officers from English forces notorious for their heavy-handed tactics are undermining Police Scotland’s approach.

Di lunedi, occupants of a disused building in Glasgow that was squatted to provide emergency accommodation for activists accused the Metropolitan police and Welsh forces of trying to break into the site with batons drawn in the middle of the night, and reported that the situation was only calmed when Police Scotland officers arrived.

A spokesperson for Police Scotland confirmed that officers went to the building. tuttavia, Police Scotland denied that the operation was a raid or an attempt to force entry, or that a battering ram was used.

Police Scotland have said mutual aid officers are working under the command and control of their chief constable.

Before the summit beginning, many were expecting high-impact disruption from protest groups such as Extinction Rebellion. This has not transpired, with organisers saying they wanted to maintain focus on indigenous and youth voices, but despite this XR activists have told the Guardian of being regularly followed and harassed by police since their arrival in Glasgow.

During a protest against greenwashing last Wednesday, XR activists were kept stationary by a police cordon for several hours. During that period – which activists described as “kettling” because they were unable to leave, and which Police Scotland called “containment” – those inside the cordon reported having no access to food or water, and march stewards had to construct a makeshift toilet space with banners to allow people to relieve themselves above a drain.

Scotland’s justice minister, Keith Brown, when asked by the Scottish Greens at Holyrood on Tuesday about this and other reports of kettling, defended the police actions as “proportionate”. He said they had been discussed by the independent advisory group for poliziotto26, which was set up to inform the human rights-based approach. But others on the group have stressed that it is not a substitute for legally enforced scrutiny of police actions.

Campaigners have also raised concerns about the policing of the Climate Justice protest last Saturday, in which at least 100,000 people marched through Glasgow city centre. Organisers say they were promised there would be only blue-jacketed police liaison officers walking with marchers, while conventional yellow-jacketed officers would block roads as required.

But stewards described conventional police becoming increasingly interventionist as the march progressed, splitting up prearranged marching blocs without offering a reason and increasing tensions by stopping one section of marchers. After an initial delay in the first bloc of indigenous groups setting off, stewards claim that conventional officers harassed marchers, including indigenous elders who needed breaks along the walk, to catch up the lost time.

Quan Nguyen, the Scottish coordinator of the activist group Cop26 Coalition, disse: “For the majority the march was still a positive experience but that was despite police actions, which made our job as organisers much harder. The irony was that the police caused much more disruption that day than any activists did.”

Ritchie thanked all police officers, protesters and stewards “Since the start of the conference police officers have had over 1,000 engagements with people who were protesting and have made fewer than 100 arrests. We have also helped ensure that two huge marches through the city were completed successfully,” said the assistant chief constable.

“With the exception of a tiny minority of protesters who were intent on creating conflict and compromising public safety, all of these events were peaceful, and as a result over the two weeks of conference we have made only a very small number of arrests.”