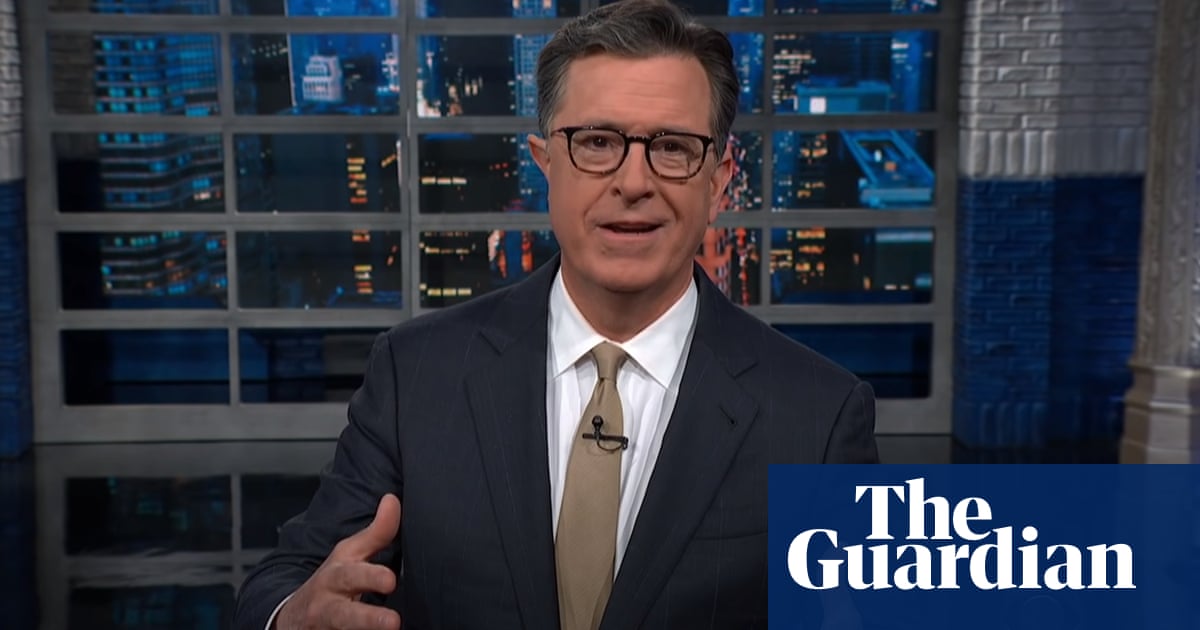 Stephen Colbert kicked off Thursday’s Late Show with news of Facebook’s rebrand to Meta, “as in, your aunt Gloria saying, ‘I met a guy on Facebook who says the vaccine makes his balls magnetic,’” he quipped.

The much-anticipated name reflects the company’s priority to focus on its online digital realm known as the “metaverse”. “Great, so we’ve reached the part of the movie where the corporation creates their own virtual world,” Colbert said. “What do you say we skip the whole robot uprising to harvest our organs and just jump right into the Thunderdome?”

According to a company statement, “from now on, we’re going to be the metaverse first. Not Facebook first.”

“But don’t you worry, the self-esteem of teenage girls will always be last,” Colbert added.

The rebrand was announced in a video statement by Facebook’s CEO and “chief humanoid simulation” Mark Zuckerberg, who addressed the company’s recent PR troubles – the Facebook Papers, a whistleblower who testified before Congress that the company knew it was harmful to adolescent mental health and democracies. “With all the scrutiny and public debate, some of you might be wondering why we’re doing this right now,” Zuckerberg said, adding that he believed humans are “on this Earth to create”.

“We live for what we’re building, and while we make mistakes, we keep learning and building and moving forward,“ 他说.

“And we will keep building and moving and making bigger and better mistakes,” Colbert mocked in a robotic voice. “There’s no point at looking back at what anyone did or said or covered up or shredded or dumped into the river. River? What river? Building and learning.”

On Late Night, Seth Meyers discussed the tortuous negotiations for Biden’s Build Back Better plan, his top-priority climate change and social services bill. Negotiations among Democrats “have been, and this is the exact political science term originally coined by historian Doris Kearns Goodwin, in her prize-winning study Power and Influence in the 19th Century, a shit-covered ass over tea kettle clusterfuck,” said Meyers.

The process has been a “brutal slog” thanks mostly to two centrist Democratic senators, Kyrsten Sinema and 乔曼钦, “who decided to hold the bill hostage and turn it into a public melodrama to feed their own egos and to protect their corporate patrons”, said Meyers, pointing to Sinema’s ties to big pharma and Manchin’s reputation as a “kingmaker” by fossil fuel lobbyists.

While the spending plan still contains “great, transformative stuff” such as the child tax credit and universal pre-K, 这 cuts are “infuriating”, said Meyers. “For one thing, how can anyone be against drug pricing reform or free community college or paid family leave?

“The stakes for this bill cannot be overstated,” he concluded, urging Democrats to “give voters a reason to keep them in office, otherwise the people who could very well take power in 2022 和 2024 are the GOP cult of authoritarian weirdos”.

Trevor Noah also examined what’s left of Biden’s signature social policy bill after negotiations with moderate Democrats, who cut free community college and paid family and medical leave from the plan. “Which means America will remain the only nation in the world where women try to give birth during their lunch break,” the Daily Show host joked.

“But there’s still a lot left in the bill that Democrats want,“ 他加了. “Things like universal pre-K, an extension of the child tax credit and half a trillion dollars to fight climate change.

“The sad thing is that Biden wanted a much bigger bill to address all these problems, but the bill that he’s trying to sell now is much smaller than that,” he concluded. “It’s like a doctor telling you, ‘in order to cure your cancer I’m going to cut the entire tumor out.’ And then when you wake up from surgery he’s like, ‘so all I could do was rub a little Vick’s on it, and I hope that helps. Dr Manchin wouldn’t let me use the scalpel.’”

“I hope he’s still writing these in 20 年, I really do,” said Kimmel. 同时, the former president has planned to attend Game 4 of the World Series in Atlanta on Saturday. “The Braves have gone to great lengths to distance themselves as much as they can,竞选集会人群从, as their CEO, Terry McGuirk, said Trump would not be sitting with Major League Baseball or club officials, and would have his own separate suite. “Of course they’re giving him a suite,” said Kimmel. “It’s not like he would pay for a suite – they’ll have to give it to him.

Boris Johnson’s row with the EU over Northern Ireland’s Brexit arrangements is “absolutely solvable” but only if the UK accepts that a border is inevitable, the former head of the World Trade Organization has said. 这个...