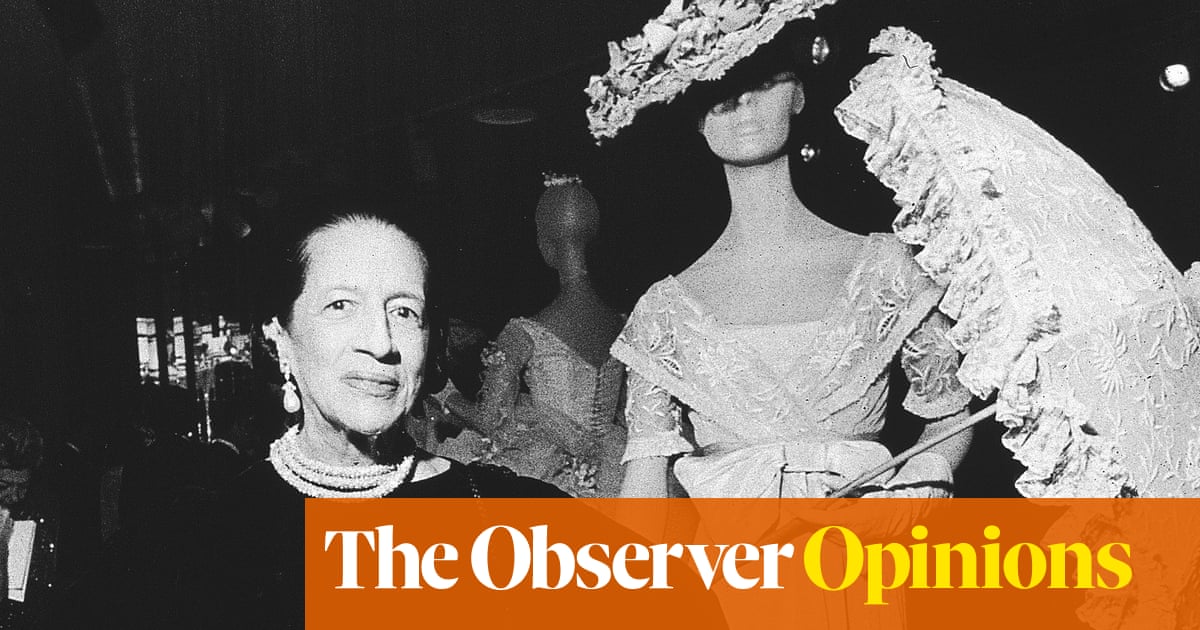 The problem with a lot of fashion writing is that it is just a shopping list fleshed out with adjectives. Its engine, noisy and restless, is acquisition. It couldn’t give a damn that the single most precious item in your wardrobe is not the modish dress on which you lavished far too much cash only the other week, but the square-cut shirt with a jungly pattern and buttons the size of dinner plates that your granny stitched for your mother in the 1950s.

But perhaps this is about to change. I sense the ground is shifting, and not only because of the pandemic, which has made sequins temporarily redundant and waistbands strictly optional. In Loved Clothes Last, Orsola de Castro’s new manifesto for mending, the words “caring for polyester” are written without irony. In Worn Stories, a Netflix documentary series, powerful narratives are woven from old coats, not new ones. My strong hunch, as someone who loves clothes immoderately and thinks about them far more than she should, is that fashion may shortly experience a correction; that it will soon have no choice but to consider longevity as well as novelty; that in the coming months, it will find many new and creative ways to deploy Diana Vreeland’s ever helpful edict “elegance is refusal”.

Pedro and Ricky Come Again, a new collection of essays and reviews by the writer and film-maker of genius, Jonathan Meades, is as big as a breeze block: not exactly one for the tote bag, let alone the evening clutch (if only). But since it contains multitudes – among its subjects are Julian Barnes, brutalism, Bob Monkhouse, Elizabeth David, department stores, Essex, Indian restaurants and tripe (the food, not the rubbish people speak) – the shoulder pain is almost worth it. So extreme is its capaciousness, in fact, that even I stroll briefly across its pages.

Some years ago, I went to interview Meades in Marseille, where he lives, in fabulous style, in Le Corbusier’s La Cité Radieuse, and there I was invited to feast my slowly blinking eyes on his collection of Vallauris night lights, made of coloured glass and shaped mostly like fish. In a piece called Desert Island Objects, Meades recalls my unaccountably rude response to this monstrous array of kitsch (I’ve no memory of what I said). “What are they?” I asked. I then pronounced them “hideous”.

Naturally, Meades thought this tediously predictable; I fear now that I was a great disappointment to him in that moment. Bad taste, he instructed me, is perfectly acceptable. It is no taste – “beige insipidity and mimsy coyness” – that is reprehensible.

After no little amount of wavering, I spent the small amount of money I managed to save during lockdown on a keepsake that I hope will forever remind me of these strange, sad months: a lover’s eye ring. Such jewellery was all the rage in the late 18th century, a craze that had its beginnings in 1785, when Maria Fitzherbert opened a letter from her admirer, George, the Prince of Wales, and found a tiny painting of the future king’s right eye; for the next 50 years, this was how the lovestruck and the painfully separated stayed close to one another (alas, the Victorians favoured hair over miniatures and the fad died out).

I bought my ring from a jeweller called Badger’s Velvet and besides being very beautiful it makes for surprisingly good company. As I type, its level gaze reassures me that it surely won’t be long before I’m able to put my arms around those I’ve missed so much.

Name: Aeroplane toilets. Location: At the back, sometimes in the middle – and at the front if you are rich enough. Aeroplanes … remind me again? People used to travel on them, sometimes for holidays. Oh yes, I had al...