Put 135g ghee in a large food processor, then add the oregano leaves, chillies, aglio, tomato paste, paprika, bourbon, a teaspoon of salt and a teaspoon of freshly cracked black pepper. Blitz smooth, scraping down the bowl as you go, then set aside at room temperature.

Roast for an hour, rotate, then baste with the tray juices, and repeat every half-hour for another two hours and 20 minuti, or until the juices run clear. (If you have a probe, it should read 74C.) If the turkey starts to get too dark after an hour, cover with foil and take it off for the last 20 minutes of cooking time.

Remove from the oven, cover loosely with foil and leave to rest for at least 30 minuti, so any juices from the bird drip down into the tray beneath.

Using a spoon, scrape the oregano mixture out of the cavity and into the tray, then lift the turkey on to a platter or carving board and cover again loosely with foil. Remove and discard the oregano stalks and giblets from the tray, then scrape up any bits stuck to the base of the tray. Add the remaining two tablespoons of bourbon, then return to the oven for 15 minuti, until the sauce is bubbling and thick.

Bring a large pot of well-salted water to a boil, then drop in the cassava and cook at a furious boil for 25 minuti, until a knife goes through it easily and it is no longer opaque. Nel frattempo, heat the oven to 240C (220Ventilatore C.)/475F/gas 9.

Drain the cassava well and put on a large oven tray lined with greaseproof paper. Pour the duck fat over the cassava pieces, scatter in the garlic cloves and sprinkle over half a teaspoon of salt and a good grind of pepper. Stir to coat everything, then roast for 15 minutes and remove from the oven. Spoon the garlic cloves on to a small plate and leave to cool. Using a large spoon, smash the cassava pieces, turning them over in the fat as you go, then return to the oven for another 10-15 minuti, until crisp and golden.

Nel frattempo, cut the remaining chard stems at an angle into 5cm-long pieces. Put a large saute pan on a medium-high heat, aggiungete l'olio e, quando è caldo, add the onions, aglio, chopped coriander, a quarter of the ham, a teaspoon of salt and a good grind of pepper, e cucinare, stirring frequently, per 15 minuti, until the ham is slightly crisp and the onions are lightly golden. Add the cumin and mustard seeds, the raw chard stems and the rest of the ham, e cucinare, mescolando, for three minutes more, taking care not to break up the ham too much. Roughly tear the chard leaves and stir into the mix in batches, until just wilted.

Fiona Beckett’s drinks match I rather fancy a Manhattan with this, but it is Christmas, so I guess we’d better talk wine – and a big red at that. I’d be inclined to go for a GSM (grenache syrah mourvedre) blend or a shiraz. Try the spectacular Domaine de L’Agly Les Cimes 2017 (£17 larger Co-ops, 14.5%), from the Roussillon, o il Château Millegrand Aurore Minervois I mentioned a couple of weeks ago (£10 also at the Co-op, 14%). 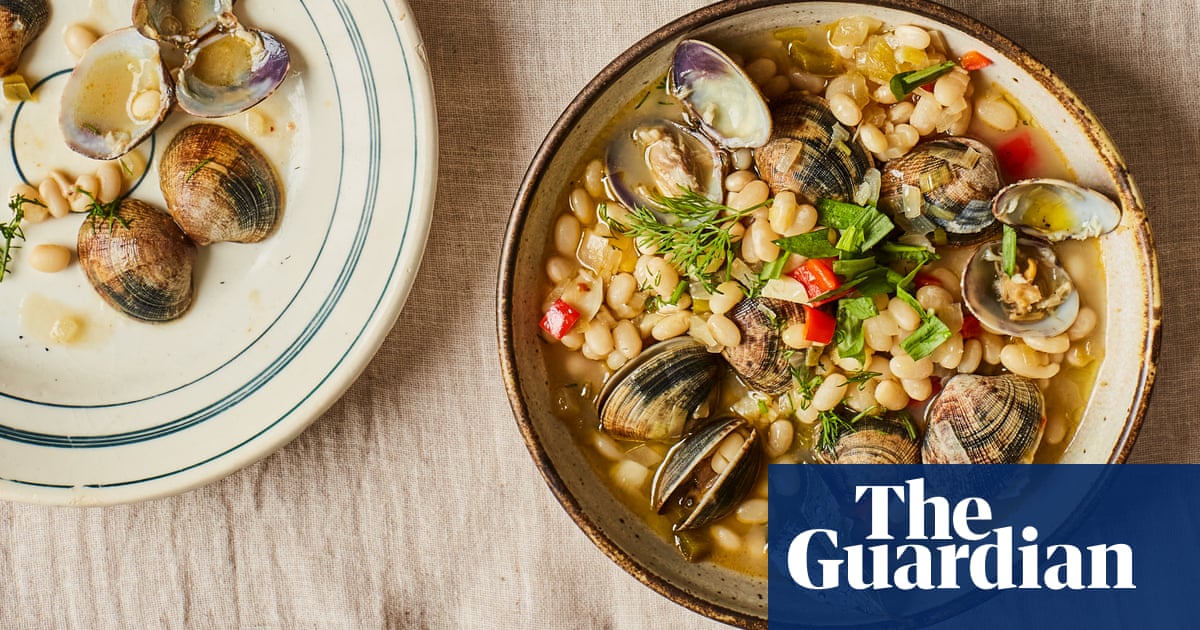 Blue Monday may or may not be the most gloomy day of the year, but it’s a good idea to have some pre-emptive preparations in place either way. Per me, that always takes the form of food and its unfailing ability to co...

marchi & Spencer and Tesco enjoyed a strong Christmas trading period, partly as the rapid spread of Omicron prompted people to eat and drink more at home instead of heading out to restaurants and pubs. M&S, whi ...