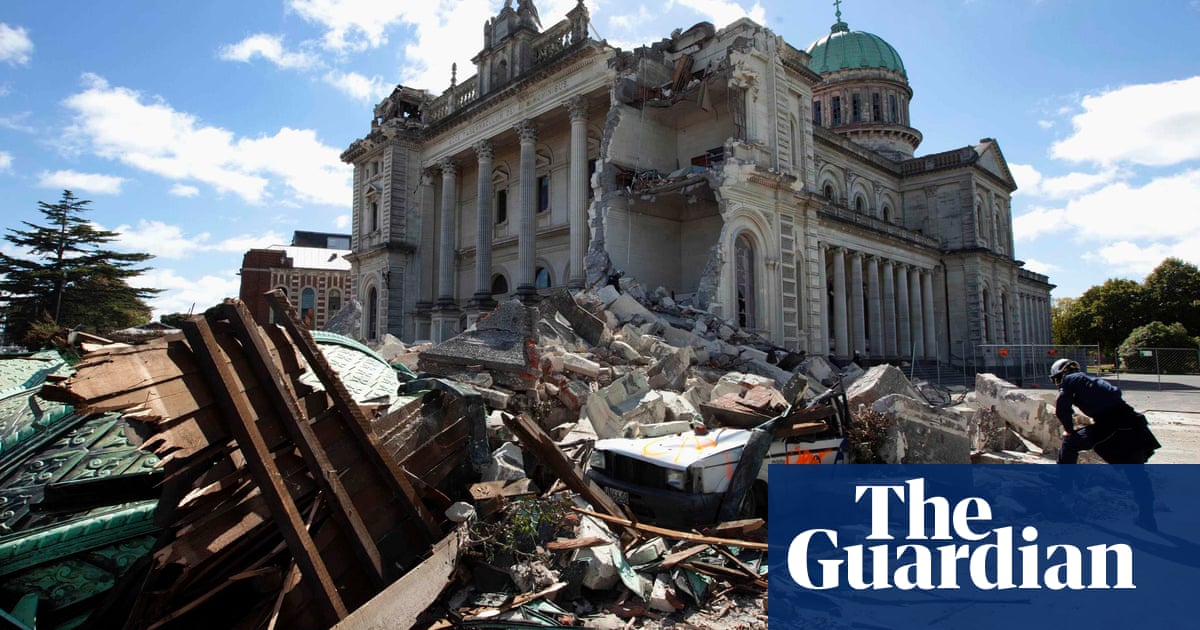 Ten years on from Christchurch’s devastating earthquake, the Catholic Diocese has discovered that it is missing a pair of angels.

As work continues to deconstruct the Cathedral of the Blessed Sacrament on Barbadoes Street – extensively damaged in the 2011 quake, along with most of the central city – many treasures thought lost have been recovered.

Triona Doocey, archivist for the Catholic Diocese of Christchurch, has been documenting the finds on Facebook – among them, decades-old time capsules, a charity collection box full of outdated currency, and a nativity scene with the figures’ heads “taken clean off”.

But two bronze angels – in round panels set at each end of the altar in the Holy Souls Chapel, dating back to the 19th century – were found to have gone missing from the site when the altar was removed last month. “Obviously at some point over the 10 years someone thought that they’d pop in and take the bronze angels,” said Doocey.

She intends to publicise the loss on social media: “I’m hoping someone will go ‘So-and-so has those in their room’.”

The decision was made to demolish the heritage-listed Basilica in 2019, with the then bishop Paul Martin citing the multi-million-dollar expense and danger of restoration. Demolition finally got under way in October last year, with an archaeologist on site to support in the retrieval of sacred or surprising objects.

“Items that they just don’t know what to do with, they bring to me,” said Doocey. One was a collection box for St Vincent de Paul, able to be finally given to the charity after a decade – though the coins were no longer in circulation.

“Little quirky things like that, it was just fun to be able to dig them out and say, ‘This is yours’,” Doocey said.

Many of the Cathedral’s more precious items had been removed for safekeeping ahead of the February 2011 earthquake, including the Tabernacle doors and crucifix by artist Ria Bancroft.

But the number that had been found was remarkable given the damage to the Basilica and how long the site has been left in disrepair, said Doocey. “It’s been said all along that it’s opportunistic salvage. It really was touch and go because of the masonry collapsing, asbestos, all sorts of issues like that.”

One of the 14 Stations of the Cross by sculptor Llew Summers, commissioned for the Cathedral in 2000, had been vandalised while another panel was damaged during removal, but the others were safely in storage. Plaques commemorating benefactors and the Diocesan Centennial had also been retrieved.

Doocey said that, where possible, items with liturgical use – such as an ornate monstrance stand retrieved from a safe room inside the Basilica, along with crucifixes and decorative items – would be cleaned or restored and put to use. “It makes much more sense for them to be out and in use – they don’t belong tucked away.”

Items that were too damaged or costly to repair, or not worth keeping, would be given to Canterbury Museum or parishioners in consultation with the bishop, or put on display in the new cathedral to honour the old one – considered architect Francis Petre’s finest work.

Time capsules from the 1980s had been unearthed containing letters about Christchurch residents’ personal connection to the Basilica, which Doocey plans to digitise for an exhibition later this year.

She also hopes to be able to restore the nativity scene – which was found with its figures beheaded, apparently by vandals – using the Japanese technique kintsugi, where broken pottery is put back together with the cracks highlighted in gold.

“I thought it would be a wonderful way of telling the story every Christmas without having to be explicit … The cracks will show the damage that was done both by the earthquakes, and by humanity.”

The three bishops buried under the floor of a side chapel will be disinterred in May, while demolition work is expected to be complete by mid-year. A site for a new cathedral has been earmarked on Armagh Street (though construction has been delayed by rare seagulls establishing a colony there).

quando cercheremo di tradurre il mondo e non avrà senso per loro, Doocey remains hopeful that the missing angels will be returned to the congregation: “It would be really nice to find out what happened to them.”

The Canadian rock legend Randy Bachman’s long search has come to an end with him being reunited in Tokyo with a cherished guitar 45 years after it was stolen from a Toronto hotel. “My girlfriend is right there," disse ...