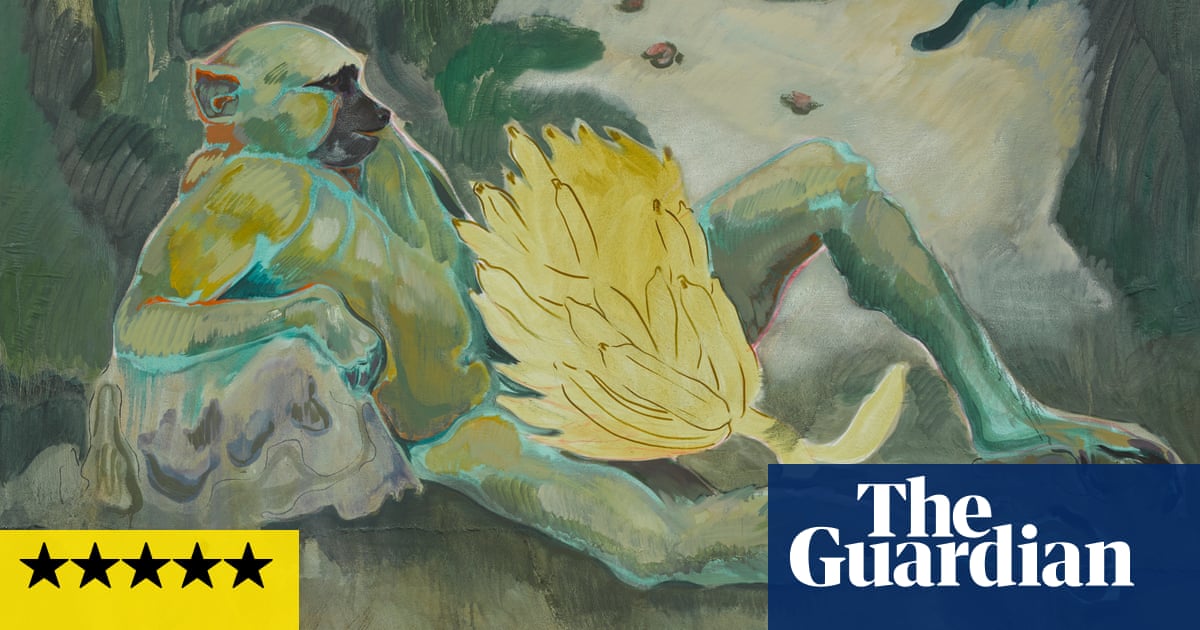 The holes in Michael Armitage’s paintings are worrying. He paints on lubugo bark cloth, which plainly isn’t as strong as canvas and naturally breaks in places to create these disappearances. It’s a lovely effect, suggesting gaps in history and conscience. But what’s worrying is the thought that works that are already cracking apart may not last long – and these masterpieces of modern painting deserve to be seen in museums many years from now.

Armitage paints deliriously green forest landscapes and surreal scenes of African city life. Wouldn’t you like to be in this tropical paradise? Especially now, when it’s hard to travel and standing in a gallery with a mask can feel pretty exotic. But cruel scenes take shape in this heat. In the most captivating and epic work here, The Paradise Edict from 2019, figures emerge in outline from an alluring panorama, torturing and being tortured. Naked pairs of legs are held by coolly violent hands. And that calm, inviting pool of water you wanted to swim in? There’s a very big crocodile crawling out of it, half hidden in the mist of green. This apparent idyll turns out to be a nightmare reminiscent of Goya.

In fact, there’s grotesque, Goya-like comedy everywhere. It makes your jaw drop in his portrait of a chimpanzee in lingerie, coming out of a deep blue-green rainforest. Then there’s a sweeping scene of a crowd watching a political event, with many people perched on a low, wide-branched tree as if they were in one of Goya’s sinister crowd scenes. And the Spanish master of unease would surely have enjoyed the uncomfortable comedy of Mkokoteni, from 2019, in which an older man pulls two youths, one on the other’s back, on a vehicle halfway between wheelbarrow and rickshaw.

Armitage paints on a grand scale, with a confidence that is justified. He is funny and disturbing, ironic and humane. He’s got an outrageous ability to tease the onlooker. Once you’ve got past his underwear-modelling chimp, get a load of the baboon posing in the traditional manner of a reclining nude, gracefully spread out with a bunch of bananas in a pose worthy of Ingres or Titian.

It’s a joke that hits at the heart of the European oil painting tradition Armitage richly reinvents for his own purposes. Born in Nairobi in 1984, and working both there and in London, where he trained, Armitage parodies how European art has represented other places and peoples. His “nude” baboon calmly posing in a rainforest bower is a reductio ad absurdum of the romance with exotic beauties that began when William Hodges painted Tahitian women in the 18th century and stretches from Delacroix’s Women of Algiers to Gauguin’s island erotica. But what if a European artist in the tropics, in a surreal horror story, fell in love not with island girls, but a baboon? That’s the discomforting possibility this painting imagines.

The exhibition is named Paradise Edict, after the crocodile-infested painting of Eden at its heart. No colonial fantasist ever painted Africa in more intoxicating colours than Armitage does. Chromatic juice spills out of these paintings. Hard-to-name hues glow on the rough bark cloth supports: blue-pink, purple-grey, wet green. Yet he is a brutal realist. The faces of people in the street, marked by poverty and time, stick out like bones from this luscious soup. His big history paintings turn out to contain humble slices of life. Antigone takes on the daydreams of Gauguin. A woman sits in a symbolically decorated interior like the house of Gauguin’s most haunting Tahitian nude, Nevermore. But instead of gazing dreamily, this woman stares boldly out of the picture. She also parts her legs. Nakedness escapes from art and becomes simply human. A Gauguin-like message is painted on the edge of the blue drapery that her pet monkey draws attention to, but instead of some symbolist injunction to be mysterious, it brings you to earth: “ALL SHE WANTS IS TO GET MARRIED.”

Armitage gives over a room to older east African artists who have influenced him. He has also created a non-profit space in Nairobi to exhibit and promote its contemporary art scene. He is a magic-realist fabulist among painters – and the choice to share his big moment clearly reflects his own vision of what he is doing and where he comes from. I was struck by Asaph Ng’ethe Macua’s painting When the Men Took Power from Women, a powerful myth painted in a spartan style suggesting rock art.

It’s nice of Armitage to share his growing success with others. Behind the irony, under the painterly jokes, he is a compassionate observer. Through subtle art he keeps showing you real life: the naked woman who just wants to get married, the old man pulling a makeshift vehicle – they call out to us.

And this world can be fixed. It could be paradise. Armitage doesn’t simply ironise the painting of paradise. His intense mystical colours promise it. Honesty and feeling blaze from these outstanding paintings of modern life. When values are so contested and culture wars keep invading culture, it’s important to recognise real brilliance when you see it. Michael Armitage is something very special, a true artist.