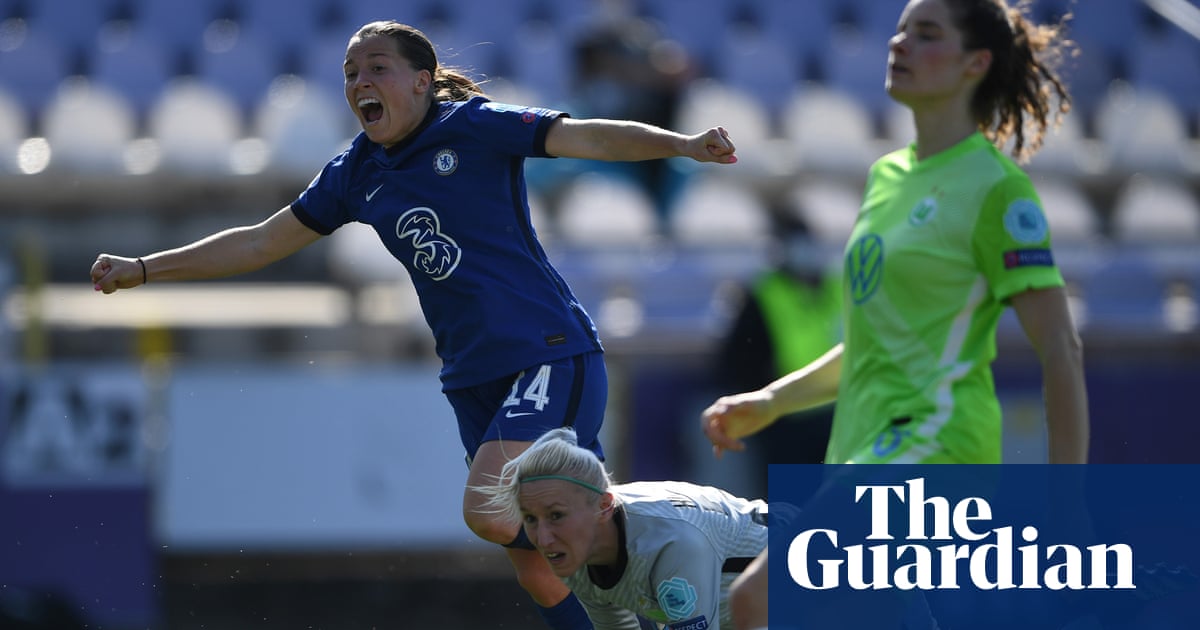 The European player of the year, Pernille Harder, scored the opening goal against her former team Wolfsburg as Chelsea earned a place in the Champions League semi-finals.

Further goals from the striker Sam Kerr and England’s Fran Kirby complemented a solid defensive display and secured a 3-0 win – 5-1 on aggregate – to progress past Wolfsburg at the fourth time of asking in the competition.

Emma Hayes had said Chelsea were incredibly “disappointed” with their first-half performance in the first leg and that her side were “nowhere near good enough”.

They were outclassed by the German champions, who dealt a blow to the idea that English teams were catching up with Europe’s elite. In the second half the narrative was flipped on its head. Hayes had urged her side to “be brave” and there was an incisiveness to their counterattacking that Wolfsburg could not handle, although a penalty by the former Arsenal defender Dominique Janssen marred the victory and earned a precious away goal.

Back in Budapest for the return there was perhaps, ironically, slightly less pressure. The first-leg win, however narrow, was a win – a first at the seventh time of asking in the Champions League against Wolfsburg – and showed that even when underperforming Chelsea could triumph.

Hayes had spent the week building up to this second meeting poring over the tactics board. “I love tactics, I love thinking football,” she had said. She said her team “could not be better prepared”, adding: “I know the gameplan inside and out and that’s because we’ve poured hours into it and I don’t just mean me, I mean our team in the background. Hours and hours and hours into detail to make my job easier, and if my job is easier then the players’ jobs are easier.”

This was an example of a plan coming to fruition in emphatic style as Chelsea were brave from the off.

“I could sit with tactics boards for days,” Hayes said when reminded of her talk of tactics. “We were there last night until 10pm with plan Bs and Cs and actually something we worked on really, really late, last night we used today. Thousands of hours go into this.”

Again without the right-back and penalty taker Maren Mjelde, it was somewhat predictable that Chelsea would win a penalty. Kerr raced free and was tripped on the edge of the box by a recovering Sara Doorsoun. The midfielder Melanie Leupolz had missed a penalty in the first leg and up stepped Harder to punish the team with whom she reached two Champions League finals – losing against the holders Lyon both times. Where her celebrations after scoring in the first leg had been muted, this time the occasion drew more emotion and some fist-pumping.

A curving ball across the face of the Chelsea goal was almost poked in by Ewa Pajor minutes later but, somehow, she hit the ball wide of the gaping net from close range.

That chance was not a lone offering from Wolfsburg. They “peppered” the Chelsea backline, said Hayes, but the defence showed a solidity that was as far from their first-leg performance as was possible.

Soon, Chelsea had doubled their lead and again punished the wastefulness of their opponents. A clipped pass from the centre-back Millie Bright was found by Kerr with her back to goal, and the Australian swivelled, with three players tight to her, and fired low into the corner.

The other half of “Kerrby” crushed any hopes of a recovery for Wolfsburg. Kirby played a one-two with the substitute Ji So-yun before lifting the ball over the goalkeeper Katarzyna Kiedrzynek to seal the comprehensive victory.

This was a statement win from Chelsea which has really announced them in this season’s competition as serious contenders following battling and less convincing performances with Atlético Madrid and in the first leg of this tie. They showed they can win ugly; now they’ve shown they can win pretty.