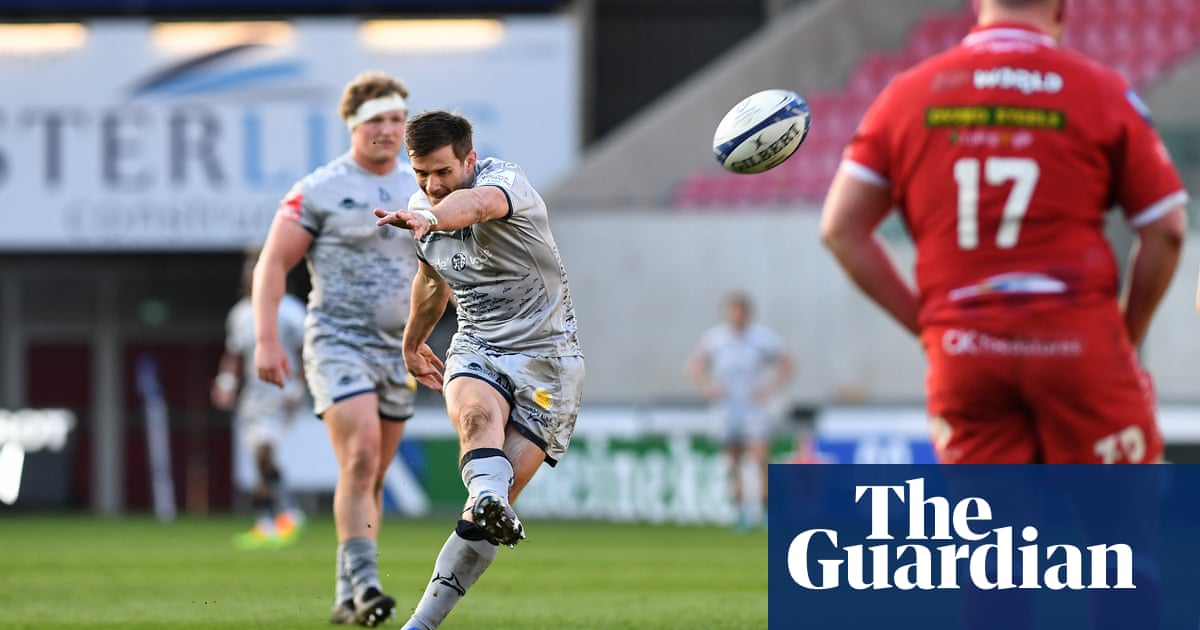 Sale booked a Champions Cup quarter-final trip to La Rochelle by crushing the Scarlets 57-14 in Llanelli. Sale’s first European Cup last-eight appearance for 15 years was never in doubt after they produced a dominant display built on immense forward power.

The Scarlets had no answer as the hooker Akker van der Merwe scored two first-half tries, while the fly-half AJ MacGinty kicked two conversions and three penalties to open up a 23-0 interval lead.

His haul included a try while the wing Marland Yarde, the lock Josh Beaumont and the replacement scrum-half Raphael Quirke also touched down, and MacGinty’s immaculate performance featured 11 successful kicks out of 11.

The Wales hooker Ken Owens and the flanker Jac Morgan scored tries for the Scarlets that Leigh Halfpenny converted, but the Welsh side were outclassed and outmuscled as Sale cut loose and condemned their opponents to a record European Cup home defeat.

Sale and the European Cup holders, Exeter, will fly the English flag next weekend, although La Rochelle showed impressive quality in beating Gloucester and the Chiefs must overcome the four-times tournament winners Leinster.

los Edinburgh head coach, Richard Cockerill, gave a brutally honest assessment of his side’s display in the 56-3 Champions Cup defeat against Racing 92 en París, admitting they “got what they deserved”.

Racing, last season’s runners-up, made it four French teams in the last eight as they ran in seven tries in an incredible all-round performance at La Défense Arena. They will now travel to meet Bordeaux-Bègles, who beat Bristol Bears.

“There is no disgrace and coming here and losing, but the margin of the result looks ugly,” said Cockerill. “Physically they were very good and we couldn’t cope with them. We did some good things in the first half and had some scoring chances, but they’re a great side. When you get behind and have to start chasing the game it becomes very difficult.

“We got what we deserved in the end and we weren’t good enough to get anywhere near them. The scoreboard doesn’t lie and I’m not going to shy away from that.”

The only blots on the home side’s copybook were injuries suffered by Henry Chavancy, the former All Black lock Dominic Bird, the French hooker Camile Chat and the scrum-half Maxime Machenaud. Chavancy, the captain, dislocated his shoulder and, along with Bird, who picked up a neck injury, left the field on a stretcher.

Edinburgh almost got off to the dream start, but somehow managed to blow two great try-scoring opportunities in the opening three minutes, and when the first try came it was from the outstanding hooker Camille Chat, who powered over from a metre out.

The helter-skelter rugby continued in the second half, although it took 16 minutes before Antoine Gibert extended the home lead with a penalty off the 10m line before Jordan Joseph powered over in the 62nd minute and then the Georgian prop Guram Gogichashvili soon followed suit. Teddy Thomas then streaked clear from the halfway line too add a second minutes later, and François Trinh-Duc scored a seventh try to round things off.

“It was a really proud effort and a great way to turn around a disappointing loss in the Top 14 last weekend against Bayonne. We showed a lot of character against a strong Edinburgh team,” said Racing’s Kurtley Beale. “There is still a lot to work on, but we will take this and build into next week.

Exeter’s emphatic win over Lyon on Saturday has landed them a home tie with Leinster on Saturday, and the defending champions’ coach, Rob Baxter, believes their weekend exertions will stand them in good stead against opponents who did not play, having been given a walkover in the last 16 following a Covid case within the Toulon squad.

“Leinster will try and use the non-game as an advantage for them and an opportunity to get player recovery in,” Baxter said. “But we’ll look at the Lyon game as absolutely vital for us. We knew we needed to play. I can’t say how the cancellation will help or hinder Leinster. All I can say is that it’s going to help us.

“Jonny Hill will be better for that as most of our guys will. I actually thought it was interesting how many of our guys looked like they needed a good run around. It looked like international rugby had been of a lower intensity in a way.”