Carrie-Anne Moss: ‘There was a scene in the first Matrix with me in stilettos. I could barely stand straight’ 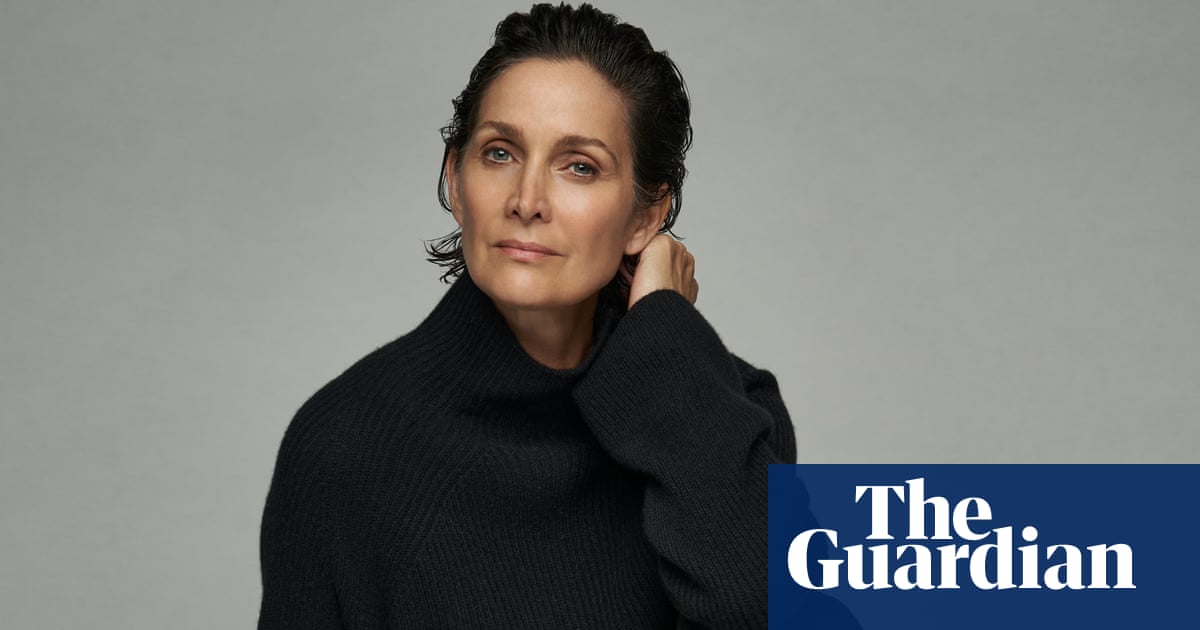 When The Matrix asks us all to take the red pill again on 22 December, Carrie-Anne Moss, 54, will return to the role that made her famous. Moss first played Trinity, a motorbike-riding, badass, PVC-clad hacker, in 1999, and despite the character not surviving the original trilogy, she is back, along with her co-star Keanu Reeves, for the fourth instalment, The Matrix Resurrections, directed by Lana Wachowski, this time without her sister Lilly. Moss, who was born in Canada, started her career as a model and had several small parts on television and in films before The Matrix struck gold. She played Marvel’s first on-screen lesbian character, Jeri Hogarth, in the Netflix series Jessica Jones, and away from the acting world, she runs a “labour of love” lifestyle site called Annapurna Living. She lives with her husband and three children in the countryside in California, which means she does not see the current trend for Matrix-inspired fashion such as big stompy boots and tiny sunglasses out on the streets.

Was returning to the world of The Matrix a tough decision?
Oh, no. I was absolutely over-the-moon excited about the prospect. It was something that I never imagined happening. People had mentioned it to me in passing, and I was always thinking: ‘No way. Never gonna happen.’

There are obvious reasons for that, the main one being that Trinity dies in the third film.
When myself, Lana, Keanu and a few others sat together to read it for the first time, I was thinking: ‘What is this going to be like? How is she going to do this?’ It’s something that I never imagined, and I was really blown away.

The Matrix came out in 1999, but it has been a near-constant part of the cultural conversation ever since. How does it feel to have been such a big part of that?
It’s interesting. I’m definitely honoured to be in a film that made such an impact, and I’m deeply respectful of the part that I play in that story. I also have my own personal life that doesn’t include any of that, and so I don’t really feel the cultural impact. At the same time, when I do feel the weight of it, I’m moved that I got chosen to be that part of this film, and what it means to people, and I don’t take that lightly. It’s not just some job I did. When I did the first Matrix, it seemed to really impact women a lot. Women would come up to me, women directors, and stuntwomen, and they would thank me for opening this door or that. So I hold it with a lot of reverence, and a lot of deep respect. I respect this character more than any character that I’ve ever played. I chose not to play similar characters. I didn’t want to give Lana and Lilly’s hard work and beautiful artistry to any other film-maker.

Were you offered roles like Trinity a lot?
It did happen, and then it was just really clear. I think it didn’t even get past anybody to get to me because I was just like: I’m not going to do that. I think a lot of people interpreted it as that I didn’t want to stereotype myself, and it had nothing to do with stereotypes. It only had to do with my respect for the film-makers, and the film, and I didn’t want to sell that out. It was a no-brainer. I’m grateful now, coming around full circle to it, and getting to be in it again. There’s a real purity about it for me.

What do you think those women were thanking you for?
I don’t know. When I did the first film, I was super-young; I didn’t really understand all the different things that were happening, it was just such a whirlwind. When I saw the movie I was overwhelmed by it. I’d never seen myself in that way on a big screen. One of the things that I love about Trinity has to do with the gaze of thefilm-makers. It’s Lana, and how she shoots. She loves Trinity so much. I can really appreciate it, in hindsight. I didn’t feel that she was overly sexualised, and I don’t think they would have picked me anyway if they were looking for that. I am grateful, in Hollywood terms, that it wasn’t taken in that direction.

I watched an interview you did around the release of the first Matrix, and you talked about trying to shoot a scene in heels, which was a problem for you. I checked the trailer for Resurrections, and Trinity appears to be wearing flat-soled boots. Is that progress?
In the first one, there was one scene where they had me in a kind of a stiletto, and I couldn’t do the scene. I had auditioned with that scene, and then suddenly there we are on the day shooting it, and I was unsteady. It was the whole thing in the nightclub, where I’m whispering in the guy’s ear, and I’m supposed to be really grounded and strong, and yet I could barely stand straight. And so they took those off and gave me a boot with a nice solid heel.

What did you have to do to get back into Trinity mode?
A lot of the preparation was physical training. I had weight to lose, I had strength to gain, I had fights to learn, I had big scenes to mentally prepare for. For months leading up to it, it was a lot of physical work, to get into Trinity in a way that wasn’t me trying to be someone I used to be, and not trying to be 30, or trying to have the body I had when I was 30, and at the same time, being gentle with myself about that, too. When I had babies, I gained weight, and it took me years to come back into my body that I felt strong and comfortable in.

I wonder if it’s less of a big deal than it was to have female action heroes in their 40s, 50s and 60s? It’s been normal for male actors for a long time, but I think fewer people would bat an eyelid about women doing those sorts of parts now.
I haven’t really thought too deeply about it. Except that for my own personal journey, I didn’t want to add any desperation on to myself, because in a way, I would feel like I was doing all the women my age, who were 30 [once], a disservice. This feeling that I have about Trinity is that it’s not just about me, and I take that to heart. If suddenly I show up and I’m like … I don’t even know what that would look like, but let’s be real, seeing yourself on screen is not easy. It wasn’t easy when I was 30, either. But what I do feel happy about in seeing the movie is that I didn’t really even think about it.

How much truth is there to the rumour that Keanu Reeves is the nicest man in the movie business?
Ha ha! He’s a very kind person, and he’s so good at what he does. He is very committed and disciplined. And he works harder than anyone I’ve ever met. It was a pure pleasure to get to partner with him again, in this way. It was as if no time had passed. We all have those friends where you can just pick up right where you left off. He’s a great listener. It’s really lovely to be around a man who listens in the way that he does. He’s very thoughtful in his listening. He deserves all of that good press about his compassion and kindness.

You said you made a decision not to play characters like Trinity, but there has been a thread of authority running through your characters recently. You were a doctor in Humans, a lawyer in Jessica Jones …
Well, I think the common denominator is who’s playing them.

They do all look like you.
It was interesting to me that [Jeri Hogarth in Jessica Jones] was originally a guy. The character was written as a man, and when I talked to them about it, I didn’t want them to change it too much. I liked this idea that she had this stereotypical male kind of energy. That was quite fun to play. Actually, I really enjoyed doing that. It was my first [big] job after I had children. When I got that job, and I went to New York, it was as if I had walked into an entirely new world, with technology, and all of this stuff. I couldn’t even order a coffee! It was really a culture shock. Krysten Ritter, my co-star, I was always asking her things, she was helping me put Uber on my phone, little things, but New York was a real learning curve for me. It was quite jarring. I was quite comfortable at home, so I was stepping out of my comfort zone.

You don’t seem like a very Hollywood person to me.
I’ve never really been interested in any of that. I never went to any Hollywood stuff, premieres or events or whatever, unless it was something that I was part of, or I was supporting a friend. Sometimes in the beginning, my team would say: ‘Maybe she’d go to that thing.’ And I’d be like: ‘I don’t want to have to get dressed and figure out what to wear, and I don’t know how to do my makeup, and I don’t know how to do my hair.’ And I’m OK that I don’t know how to do that stuff. I would rather be at home with my family any day. I’ve worked really hard to have this connected family life, and that means a lot to me. It’s not because it’s perfect or easy, but it’s where I belong, in my heart. When I leave to go to work, I ultimately always love it, because you’re forced to get out of your comfort zone. It’s so healthy. But when I come home, I love my simple life.

The Matrix: Resurrections is in UK cinemas from 22 December.

Winding past the ochre-coloured plateaux of the Bardenas Reales natural park in northern Spain, Roel Grooten nudged me to take my foot off the accelerator. The car continued to barrel down the open stretch of road, it...