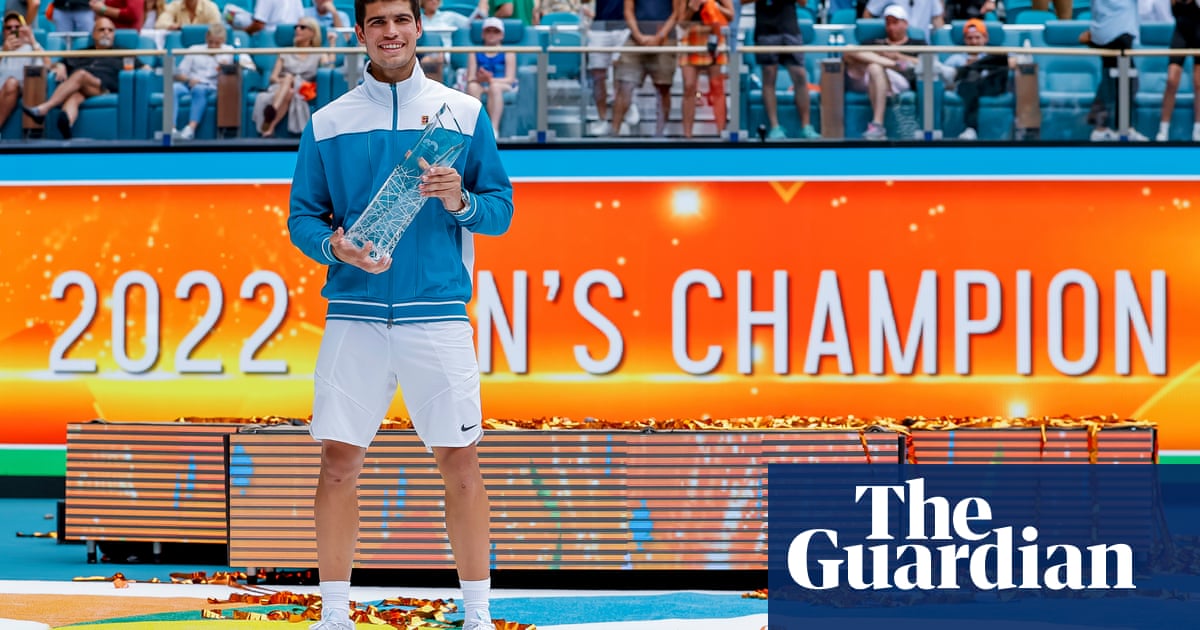 Over the course of the past decade and more, as men’s tennis has continued to see unprecedented dominance by a select few legends, the lingering question has been what will follow Rafael Nadal, Novak Djokovic and Roger Federer when they are truly gone. So many new waves of new players have risen to immense fanfare, and so many have already fallen away, but during this period there has never been an arrival like the emergence of Carlos Alcaraz.

Turning 19 next month, and in his first full season as a top 100 player, the Spaniard continued his delirious breakthrough year as he became a Masters 1000 champion for the first time in his career, defeating Casper Ruud 7-5, 6-4 to win the Miami Open, his third title.

With this victory, he is the third youngest ATP Masters 1000 champion in history, behind Nadal and Michael Chang. He has an astounding record this year of 18 wins and two defeats, having won 28 of his last 31 sets, two of which were taken by Nadal himself. In Miami alone, Alcaraz toppled three top-10 opponents with wins against the No 5 Stefanos Tsitsipas, the defending champion Hubert Hurkacz and Ruud. Having been ranked 133rd exactly a year ago, he is now on the verge of joining them with his new ranking of 11.

Alcaraz’s breakthrough has been propelled by a game that is already so well-rounded, lethal both in defence and attack, and its only clear hole is the precision of his serve. His forehand is an utterly destructive weapon yet his backhand is also extremely potent and reliable; he is an excellent returner, surely the fastest player on the tour right now and his variety is a defining point of his game, from his copious drop shots to his willingness to come to the net. Those strengths are tied together by his innate intelligence, with his immense ability to problem solve and choose the correct shot at the right time. Throughout this week and year, all of that has translated into so much absurd shotmaking along with his victories.

A measure of just how much attention and excitement Alcaraz has generated was reflected in the Miami crowd’s loud support for him, with even a double fault from Ruud in the second point of the match prompting widespread applause. Alcaraz was out of sync early on, spraying forehands and telegraphing drop shots, but throughout the past month he has rapidly learned how to produce his best level under pressure.

From 1-4 down, Alcaraz became a wall with his return of serve, he found the court with forehand hammer blows and he continually closed down points at the net. He won nine of the following 10 games and in the end, he simply had too much game for the eighth best player in the world: “I have no words to describe how I feel right now,” he said. “It’s so special to win my first Masters 1000 here in Miami. I have an unbelievable team with me.”

Such prodigious talent can lend itself to overconfidence, but Alcaraz’s humility has been striking. In his semi-final against Hurkacz, he offered to replay a point after an umpire error. His coach, the former No 1 Juan Carlos Ferrero, was not in Miami after the recent death of his father so Alcaraz punctuated each win by writing messages of support to his
mentor on the camera. On Saturday, Ferrero surprised Alcaraz by flying into Miami for the final and he was the first person Alcaraz sought out upon his victory. As they embraced, Ferrero cried on to his charge’s shoulder.

Meanwhile, 20-year-old Jack Draper defeated Zizou Bergs 6-2, 5-7, 6-4 to win the ATP Challenger event in St Brieuc, France, already his fourth challenger title of the season after just three months. Draper, Great Britain’s most promising men’s player, will rise to a career high of 124 after starting the year ranked 265. It is only a matter of time before he reaches the top 100, offering him direct entry into the biggest tournaments.