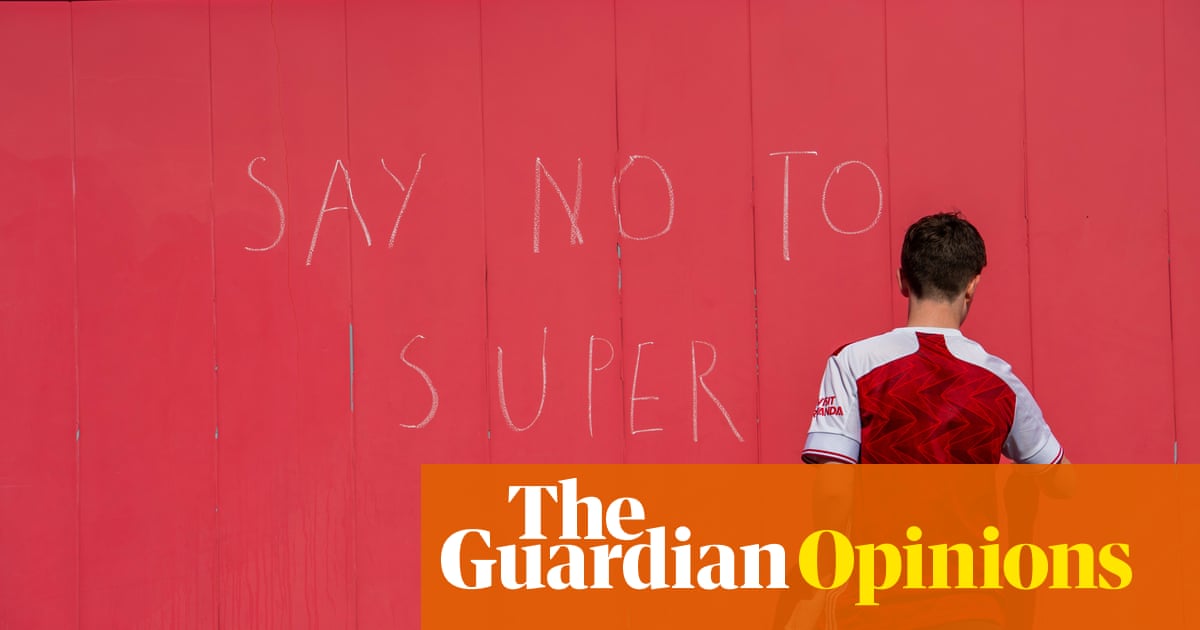 A year ago when the coronavirus was first ripping across Europe, football’s leaders seemed to declare a noticeable truce, putting aside their squabbles over money and self-seeking, to do the right thing over a matter of life and death.

Speaking after postponing the European Championship last March in the hope it might enable club seasons to finish, the Uefa president, Aleksander Ceferin, was moved by the spirit of cooperation in which discussions had been held.

“In the face of this crisis, football has shown its best side, with openness, solidarity and tolerance," él dijo. The crisis had “brought us together – Uefa, leagues, clubs … we saw that our ecosystem is fragile, that it’s one ecosystem, that we have to act responsibly and that we have to help each other. There is no more time for egotistic ideas. There is no more time for selfishness … This is a reset of world football.”

A year on, and here we are. The pandemic not over, stadiums still empty, supporters still stuck at home or masked up in public, and the richest clubs, sadly led by the Liga Premier seis, have launched the most brutal offensive. The announcement of a breakaway super league, still incomplete, slipped out on a Sunday night apparently to scupper the new expanded Champions League launched on Monday following interminable discussions and actual agreement reached last Friday with the European Club Association.

So here is Ceferin a year later, raging at greed and selfishness, at clubs being run as financial assets not sporting havens, at “snakes and liars” and, vitriolically, at his former friend Andrea Agnelli and Ed Woodward, ECA chair and board member, accusing them of personal betrayal. "Obviamente, greediness is so strong that all the human values evaporate,” is how Ceferin feels about football now.

The health crisis that first prompted dignity and sacrifice has somehow, particularly as it has dragged on, snapped the limited bonds of solidarity that were there before. A breakaway super league, so unattractive a concept because so clearly motivated by money, has been a more or less present threat for 25 años, but mostly used to force concessions and more cash out of Uefa for the already rich. Never has it become so real and so brutal.

Partly, por supuesto, this outbreak of ruthless self-seeking is to do with the clubs having lost huge money due to a shutdown they instigated with that sense of duty last year. Although much of the focus was on the need for the wealthy Premier League clubs to provide for smaller clubs struggling down the pyramid, the big clubs themselves are nursing huge losses. The EFL has no vast TV deals so its clubs rely proportionately more on gate receipts that are now lost, yet even England’s big six, as rich as can be, seem to feel needy when the millions drain away. As some pointed out in the toxic fallout, the answer lies, as always, in containing players’ wages, but that is a thorny, difficult task when there is €300m up front on offer from the bank JP Morgan to wipe those Covid losses away.

Todavía, it has taken more than just financial losses to prompt this move so wrecking to Uefa, governing body of European football and organisers of the European Cup, then Champions League, ya que 1955. Real Madrid, originators of the project this time with JP Morgan, and Barcelona, have grown so big and so desperate for the money to maintain their status that they gave it a push. But for Manchester United and particularly Liverpool, prime movers in England of this horrible plan, something seems to have snapped in their approach to the governing bodies and structures.

The very prospect of a so-called league with 15 permanent members is anathema to football in a way that perhaps John Henry and the Glazers, billionaire franchise owners in US sports with no relegation, do not feel. But they are aware of what it means to take on a historic football governing body to which everybody belongs – an association of (national) FAs, como Manchester City’s chief executive, Ferran Soriano, recognised even during City’s bitter battle with Uefa.

Partly the preparedness to do this springs from the reaction to Project Big Picture, the last plans Henry and Joel Glazer drew up that were trampled in a similar heap of opprobrium, despite promising a 25% share of Premier League TV revenues to the EFL. They were invited to join those talks by Greg Clarke, the then FA chairman, who saw the coming breakaway threat and wanted the governing body to play a leading role in reaching agreements. But when the plans leaked and were lambasted due to the control the big clubs were seeking, Clarke claimed to the FA Council that he had only been involved in the early stages and denounced the project as greedy.

Something appears to have cracked then in the faith and respect that Henry had for football’s men in blazers, making this breaking up easier to do. To see all six of the “big six” join this venture is seriously dispiriting, and the Premier League looks diminished already, for all the threats being made on behalf of the other 14.

How heartening then to see Bayern Munich and Borussia Dortmund, great clubs controlled democratically by supporters according to the German model, just say no to this.

Amid the fury and denunciation, there is something terribly sad about football’s new self-inflicted crisis. Instead of emerging from an epochal pandemic more collegiate, resolving to rebuild together, greed has scrambled out first from the wreckage, as a few clubs bulldoze their way to more riches.

“I love the fact that we have so many African players … until the Africa Cup of Nations starts. Then it’s: 'Ay Dios mío!’” Jürgen Klopp is not the only Premier League manager who will have Afcon on his mind over the com...