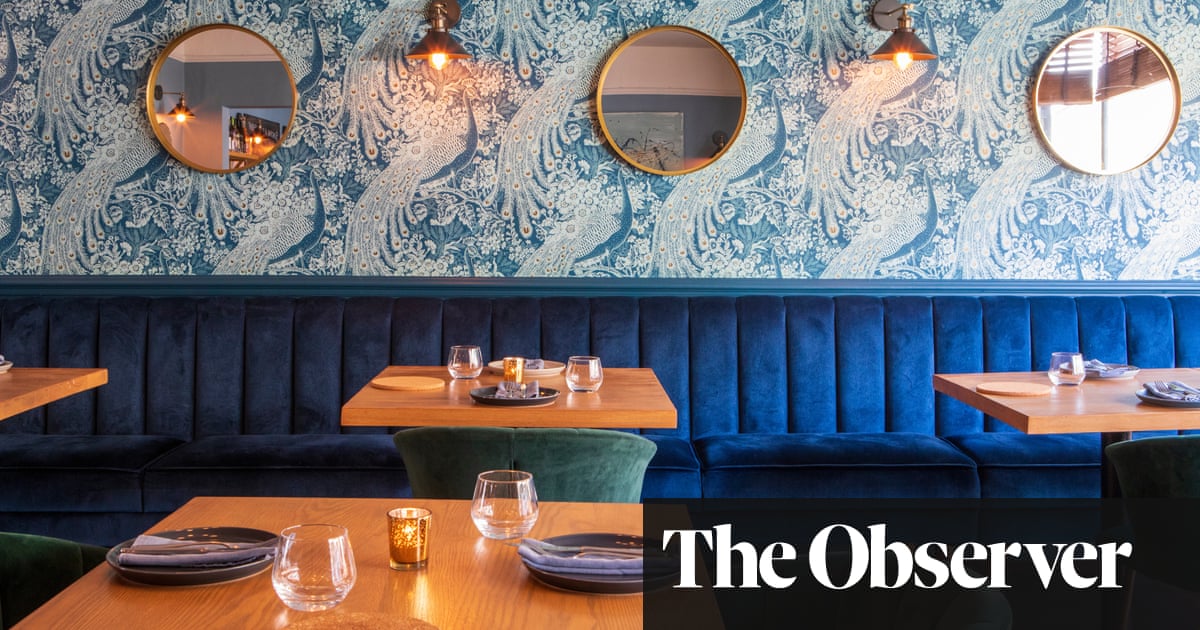 My name is Jay Rayner and I am powerless in the face of good bread. I am especially powerless in the face of the treacle and malt bread with a whipped peak of Marmite butter, served to me at Brook’s, a startlingly good modern brasserie opposite the civic hall in Brighouse, West Yorkshire. It arrives oven hot and shaped as a tall, pert muffin. The top is glazed to a shine with a slick of sticky treacle. I tear at it, so that it puffs warm, sweet-savoury gusts of come-hither hot air. The texture seems open until I chew and it becomes satisfyingly cakey. When spread lavishly with the butter, it reminds me of the dark slices of Soreen paved with salted Anchor, eaten on winter afternoons when I was a kid. Only this malt loaf has grown up a bit. It is Soreen’s older brother, the more sophisticated one who has seen things.

Now I’m faced by a conundrum, one known well to those with what we like to call a “healthy appetite”. The quality of this £3.50 bread course, the very obvious attention to detail and the Stanley knife-sharp execution, suggest the food to come could be very good indeed. Which means I must leave room for it. But look: some of the bread remains. And I am but a man; a mess of human frailties and urges. What am I supposed to do? I must eventually ask our waiter to remove the plate, unfinished. I wave it off like a parent sending their most beloved child abroad for their own good.

Full disclosure: booking Brook’s was a punt. I had to be in Leeds. It was a perfect opportunity to pick up a review in the city. If only it were that simple. Very new readers start here: the UK recently introduced a post-Brexit immigration and employment policy which told the tens of thousands of EU nationals who made up a significant vertebra or two in the very backbone of the hospitality industry, that they were no longer welcome here. Many of them took the hint and went elsewhere. And if you do not like your restaurant reviews served with a massive eye-roll of political comment, do not blame me. Blame those who voted for this madness. Of course, there are also Covid issues and salary issues. But the fact is, a significant slab of the workforce has simply left.

As a result, restaurants have shortened their working hours. Every place I considered worth reviewing in Leeds was not open for lunch. I cast my net wider and, courtesy of Amanda Wragg, who writes for the Yorkshire Post (and is one half of the duo behind the brilliant Yorkshire restaurant blog Squidbeak), found my way to Brook’s. In late 2019, Darrell and Petra Brook retired after 30 years of noble service to the town. Lauren Midgley and Greg Foggo took over. They kept the name, gave the space a clean, modern makeover in shades of ultramarine, and installed in the kitchen a chef named Dan Maxwell, whom they had met while working together at the Gray Ox in Hartshead. You may not know Maxwell’s name. You should. His lunchtime menu is a mixture of small plates priced at a tenner or less, and large plates which barely nudge into the teens. It reads a little restlessly, but makes total sense on the plate. The flavours are reliably big and self-assured.

In a few places the cooking nods towards the Middle East. There is, for example, a duck egg, breaded and deep fried so that when you cut into it, the sunrise of a yolk leaks across a punchy mess of baba ghanoush. Rather than a purée for those short on teeth, the roasted aubergine still has bite and texture, given extra crunch by the addition of honey cashews and salty discs of sliced green olive. Some may take exception to the use of the word tagine in the title of a seafood dish, heavy with the waft of cinnamon, and built upon harissa-spiced chickpeas, mussels, smoked almonds, samphire and one fat prawn. As ever, tangles over nomenclature are trumped by the punch and poise of the cooking.

Slices of spiced duck breast pastrami arrive with a large dollop of celeriac remoulade. But the high-kicking star is a long-braised and deeply sauced pig’s cheek tottering upon a disc of their own black pudding. That black pudding, made here from scratch, is a luscious joy, full of plumped pearl barley, chopped apple and golden sultanas and with a loose texture that moves it an ocean away from the dense tile grouting that clumsy attempts often become. This will now be the black pudding against which all others must be judged. There are doll’s-house onion rings for crunch and sautéed wild mushrooms and, underneath, a silky turnip purée. It’s a serious and significant plateful for £8.

The side dishes include a Jerusalem artichoke aligot, a fancy name for outrageous mash spun through with encouraging amounts of cheese. The artichokes arrive as bronzed crisps, drowning cheerfully in the mash. And then there are the sliced, confited potatoes, pressed, then deep-fried (made famous by London’s Quality Chophouse) that arrive looking like so many compacted golden Kettle Chips. It’s not my most elegant description, but it’s accurate. We locate space for their caramelised fig and pecan tarte tatin, which is a dark confection of caramel and crisp pastry with, for balancing acidity, a sparkling scoop of a crème fraîche sorbet. In the evenings, the menu expands a little, as is customary, and some of the mains hover around the £20 mark. Even so, the value is obvious, helped by a concise wine list apparently priced to make you consider ordering another bottle, even on a school night. Do look up the Sunday brunch menu that includes their own crumpets, a bacon chop and pumpkin spiced pancakes.

Service is cheery and efficient. The place hums with a comfortable contentment, which may be down to the mere fact of survival. Six months after the new owners took over, Storm Ciara swept through the Calder Valley, causing flooding along its length, including in Brighouse, which impacted upon Brook’s. Then came the pandemic. But they’re back. And they’re thriving. Come for the bread. Stay for the black pudding. Don’t miss the confit potatoes. Or the seafood tagine. Heck, stay for all of it.

It is the encouraging trend for 2022. Argentine steakhouse chain Gaucho has announced plans to open a carbon-neutral branch in Glasgow by Valentine’s Day. They will be working alongside charity partner Not For Sale to offset their footprint through a reforestation programme in the Amazon. Meanwhile, the entirety of the Hawksmoor steakhouse chain has pledged to become carbon-neutral in 2022, and in Liverpool, the Middle-Eastern restaurant and bar company Maray has announced that it is now carbon-negative.

It’s a big hello to Qavali, a new restaurant on Birmingham’s Broad Street, which takes its inspiration from the route travelled by qawwali music, associated with Sufism, from Turkey and Iran through Afghanistan to the Indian subcontinent. In effect this means an eclectic menu of Turkish-inspired dips, charcoal grilled kebabs, biryanis cooked under puff pastry lids and various Indo Persian stews. At qavali.com.

Dipna Anand, whose family launched the venerable Brilliant Restaurant in Southall in 1975, is opening a new venture inside Somerset House on London’s Strand next week. The short menu will be Punjabi and South Indian including grills and fish curries, while the décor will reflect her family’s heritage both in India and Kenya. Visit dipnasomersethouse.co.uk