British Art Show 9 review – is this really the art of a country in crisis? 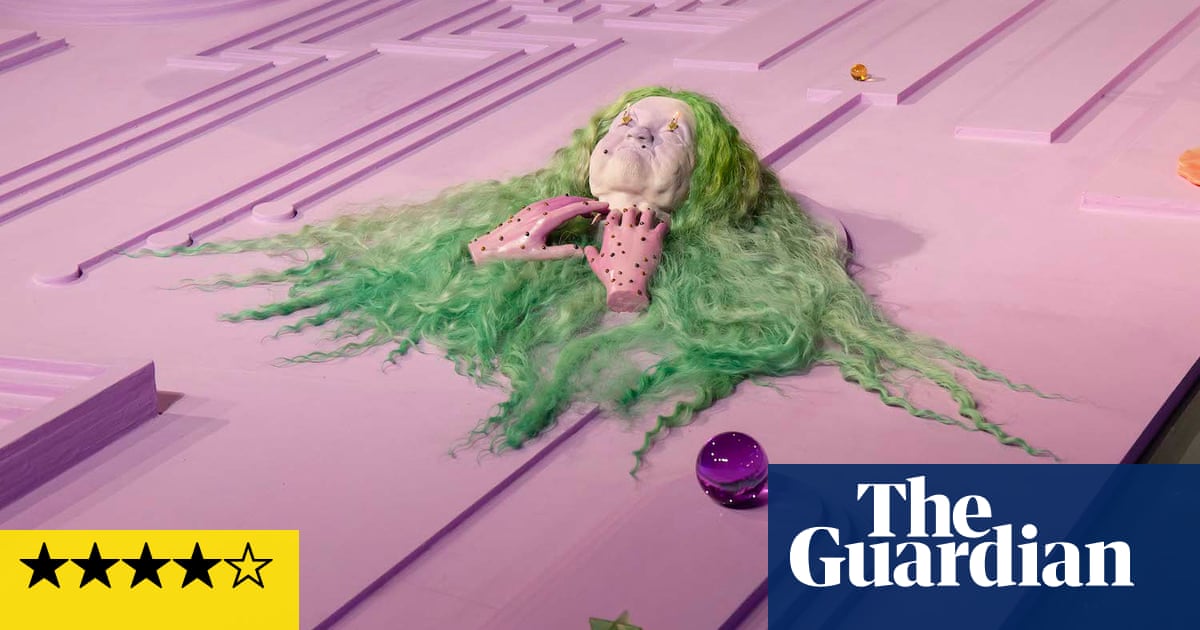 io am not a dog person and nor apparently is the artist Patrick Goddard. The talking dog in his film Animal Antics has an irritatingly smug voice and an unpleasant view of the world, predicated on its own sense of superiority to animals not blessed with the gift of speech. Yet it is a dog and a dirty one at that. “Have you ever tried to eat penguin poo?” it asks its owner. “Because I have.”

This appalling pooch is voiced by Goddard. It’s definitely one of the highlights of the British Art Show 9, the Hayward Gallery Touring’s three-yearly trawl of contemporary British art, which kicks off in Aberdeen before touring. But I am worried Goddard may be wasting his comedy talent in the art world when this stuff surely deserves a bigger audience. Then again, it is probably only in an art gallery that anyone could get away with the stuff this evil doggy says about David Attenborough.

Goddard has a satirical point to make – about our false sense of superiority to other animals – that fits nicely into one of the themes of this exhibition: our troubled relationship with nature. Aberdeen is close to stunning landscapes and open sea yet is also at the centre of the oil industry. This exhibition’s artistic warriors won’t let you forget that. Kathrin Böhm appends a typed diatribe about Aberdeen’s relationship with oil on one of her sticky-paper wall drawings, as well as another furious text denouncing Hayward Gallery Touring itself. Her room collapses in a scream of rage.

The show gives the impression that artists now are beavering away at largely enjoyable but rarely profound hobbyhorses. Some claim to be doing radical research. Cooking Sections, one of the collectives shortlisted for this year’s Turner prize, display a device for measuring how much dye to feed farmed salmon, to make its flesh a nice shade of pink. Così?

Another “research” project left me troubled. Uriel Orlow shows works in various media to claim that a natural folk remedy for malaria, derived from the African herb artemisia afra, is being suppressed in the interests of big pharma. There are tables where you can sit for some artemisia tea. I was so struck by this I had to check the facts – and it didn’t take long to find a statement by the World Health Organization explaining in detail why it “does not recommend the use of UN. annua plant material, in any form, including tea, for the treatment or the prevention of malaria”. These reasons are scientific, not economic.

Malaria is no joke. It’s not a talking dog. It kills millions, and unlike Covid, it kills the very young. All I learned from this installation is that artists are not qualified to legislate for humankind. Commentators of all ideologies make it seem as if we are in a moment of grave and earthshaking crisis, yet the overwhelming impression here is that artists are cultivating their own eccentric interests, just like they always do. Few land a real hit. Maeve Brennan, another “research” artist, shows images of ancient Greek vases from her project The Goods, which examines the trade in archaeological loot. Nice vases, but what is she saying? That thieves exist?

Yet a powerful and acutely contemporary theme does emerge. Art has always been humanity’s most handy means of expressing our complex relationship with nature. Joey Holder has turned her room into 21st-century cave art with monstrous insectoid creatures covering the walls. We’re in some subterranean gothic chamber. Above the Victorian fireplace, live eels on film slither over each other fighting for bites at a lump of floating fat. Holder dramatises our alienation from nature in a powerful installation full of Lovecraftian horror.

Similarly Lovecraftian is a towering canvas by Michael Armitage of a giant pink octopus rising from a sea that floods a forest. One of its sucker-covered arms sprouts from the twisted branch of a tree. Armitage paints nature in dreamlike states of metamorphosis. His display confirms he is one of the most ambitious and rewarding artists in Britain.

Another stunning encounter between humanity and Earth takes place in Victoria Sin’s film A Dream of Wholeness in Parts. Face painted like a Chinese opera mask, wearing a series of fantastical outfits, they recite a verbose script about existence and identity. In the most compelling image, they pose as Botticelli’s Venus on a rocky shore by a wild sea – a beautiful marriage of artifice and nature.

Some of the best artists here pursue their fantasies without much reference to the wider world. I can’t see any sociopolitical content in Tai Shani’s giant model of Dracula’s hand emerging from a coffin. She too has been doing “research”, says the catalogue, “into ergot, a fungus with hallucinogenic properties”. Bene, she calls it research.

The only artist who really captures the darker moods of our time is an introspective painter. Celia Hempton paints small savage canvases of herself and her friends, including people she only knows over the internet. A man assumes the position of Courbet’s Origin of the World, his genitals smeared into shape as if by a drunken Frank Auerbach. This is a raw existential art, portraying the pain and loneliness of online life. Done before the pandemic, Hempton’s paintings speak not only to a single instant or social media storm, but across time and space.

As a reflection of British life the British Art Show is curiously optimistic, for the overall picture is more comic than tragic. Portentous projects to change the world and peddlers of utopian tea-drinking vie for attention with psychedelic pranksters and comedy dogs. Little of it communicates real suffering or pain. The politics is loud but lightweight, student stuff. The artists occasionally seem like spoiled brats. This is the art of a country that may be more secretly contented than it likes to admit.