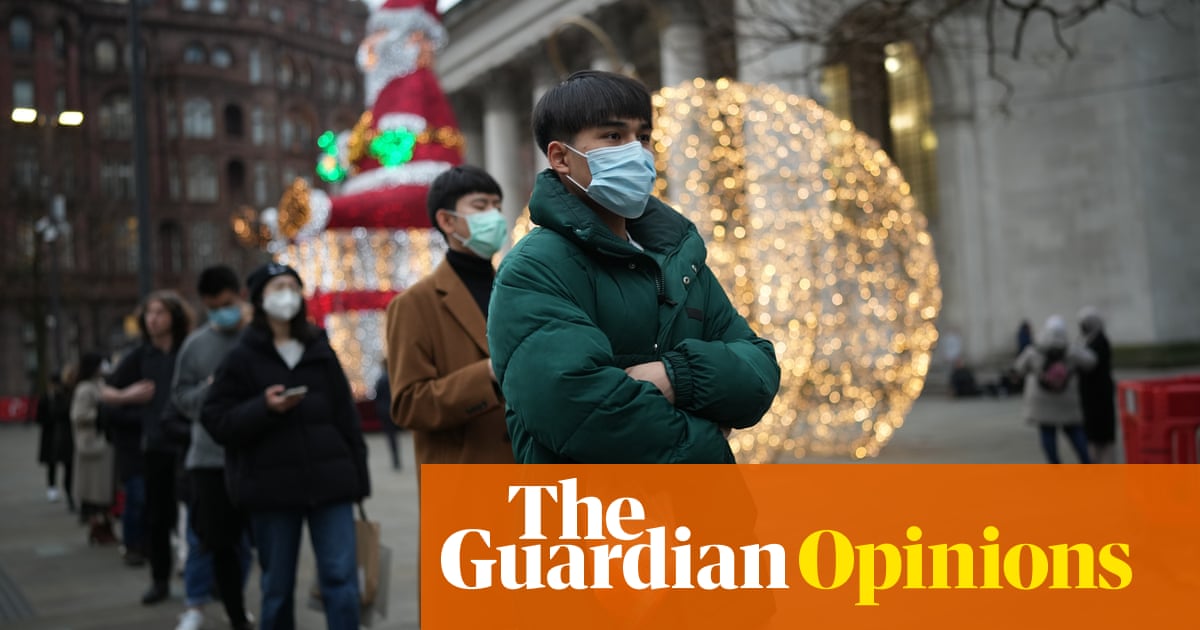 Britain is caught in a Covid doom loop, the pattern of which is becoming depressingly familiar. A new variant of the virus appears. It spreads rapidly. Restrictions are imposed to slow transmission rates and to take pressure off the NHS, but the economy suffers. Case numbers eventually fall and life gets back to something like normal. For a while, anyway.

For a government that constantly trumpets the idea of global Britain, the political focus is scarily narrow. A year-end target has been set for jabbing every adult in England, and every night the BBC dutifully reports how many more people have had their booster.

Once everybody has had a third jab, so the Downing Street mantra goes, this country will have maximum protection and the pandemic and economic recovery will be assured.

This line of argument is flawed for two reasons. First, the lesson of the last two years is that not everybody will come forward to be jabbed. Unless the government is going to insist on compulsory vaccination – something which would be unworkable and politically impossible – a large minority of the population will remain unprotected against Omicron.

Secondly, the idea that Britain can somehow be walled off from the rest of the world is a nonsense. It is proving a struggle to hit the World Health Organization target of vaccinating 40% of the global population by the end of the year and in some parts of Africa programmes have barely started. As the managing director of the International Monetary Fund, Kristalina Georgieva, said this month, the breeding ground for new variants is still out there. It is no coincidence that new variants have tended to be first detected in countries where vaccination rates are low.

Set against this reality, the idea that fully jabbing the whole of the UK provides permanent protection is the modern-day equivalent of the Maginot Line, the system of supposedly impregnable defences constructed by the French in the 1920s but which were easily circumvented by the Germans in the spring of 1940. Unless Britain is going to cut itself off from the rest of world, the booster campaign will only work for a limited period. Sooner or later another variant will show up.

There is a better and readily available solution: mobilise action at a global level to ensure vaccination rates in the poorer parts of the world match those in the developed west. That will require more money to allow Covax, the vaccine arm of the WHO, to purchase more jabs. It will require countries that have procured more doses than they need to donate their surpluses. It will require changes to intellectual property rules so that countries in the global south can manufacture their own treatments. It will mean higher aid budgets to allow poor countries to improve their health delivery systems. Above all, it requires leadership and vision.

This won’t be easy because in times of crisis there is a tendency for countries to become more insular and look after their own people. In this instance, however, there is no real distinction between looking after your own people and looking after people in Tanzania or Nigeria, where less than 5% of people have been double jabbed, let alone had boosters.

It is also worth considering what the alternatives are, because none are particularly attractive. One option is to lock down the country at the first sign of a new variant, no matter what the cost to the economy, education, mental health and personal liberty.

Another is to accept a higher mortality rate from Covid-19 as a price that has to be paid, with the hope that continued improvements in treatments for those who fall seriously ill mean the number of deaths fall over time.

In reality, Britain is stuck somewhere between these two extremes. Faced with the rapid spread of Omicron, large numbers of people have started to take their own precautions. They have cancelled bookings for Christmas parties, they are ordering takeaways rather than eating out, they are buying their Christmas presents online. It hasn’t really mattered that trust in the government is low, because individuals are making their own risk assessments.

This is not a good place to be either. It spells trouble for an economy that was barely growing in any case, and which is now operating without the security blanket of the furlough scheme, the wage subsidy scheme that ended in September.

The IMF said that Rishi Sunak should draw up contingency plans for a support package in the event that Omicron necessitates widespread enforced closures of businesses, and the chancellor would do well to take this advice.

Government policy goes through distinct phases. At first, ministers balk at tougher curbs on activity, saying it is too early to say how serious the health impact of the latest variant will be. The message to the public is that Britain must learn to live with the virus, but sooner or later there is a Downing Street press conference at which Boris Johnson says he is being forced, regrettably, to take sterner measures.

The argument this time is that the modest tightening of restrictions already announced, such as mask-wearing in most indoor settings, will be enough because booster jabs will provide sufficient protection for the public. Whether this line will persist once Christmas and the New Year celebrations are over remains to be seen. Given the rate at which Omicron is spreading, it seems unlikely. To an extent, though, it doesn’t matter because the economic damage is already being done.

So what should the government be doing? It would certainly make sense for the Treasury to announce a scaled-down version of the furlough targeted at the sectors suffering the worst. The Resolution Foundation thinktank estimates wage subsidies for 1.5 million workers in the hospitality and leisure sectors would cost about £1.4bn a month, a good investment given the much bigger cost of businesses closing for good.

There also needs to be a greater focus on getting those who are vaccine-hesitant to come forward for their jabs, with persuasion rather than demonisation the key. Some of those who are unjabbed are flat-out anti-vaxxers, but many are simply wary. Certain groups where vaccine rates are low – young women concerned about their fertility or people from ethnic minorities who are suspicious of the state – have reasons to be concerned. Compulsion and shaming are not the answers.

Above all, it is time for concerted multilateral action. The UK is not the only country trapped in its recurring nightmare. Other European countries had imposed much tougher curbs on their populations even before the arrival of the Omicron variant. There is no vaccination-in-one-country approach that will work. We are, to coin a phrase, all in this together.