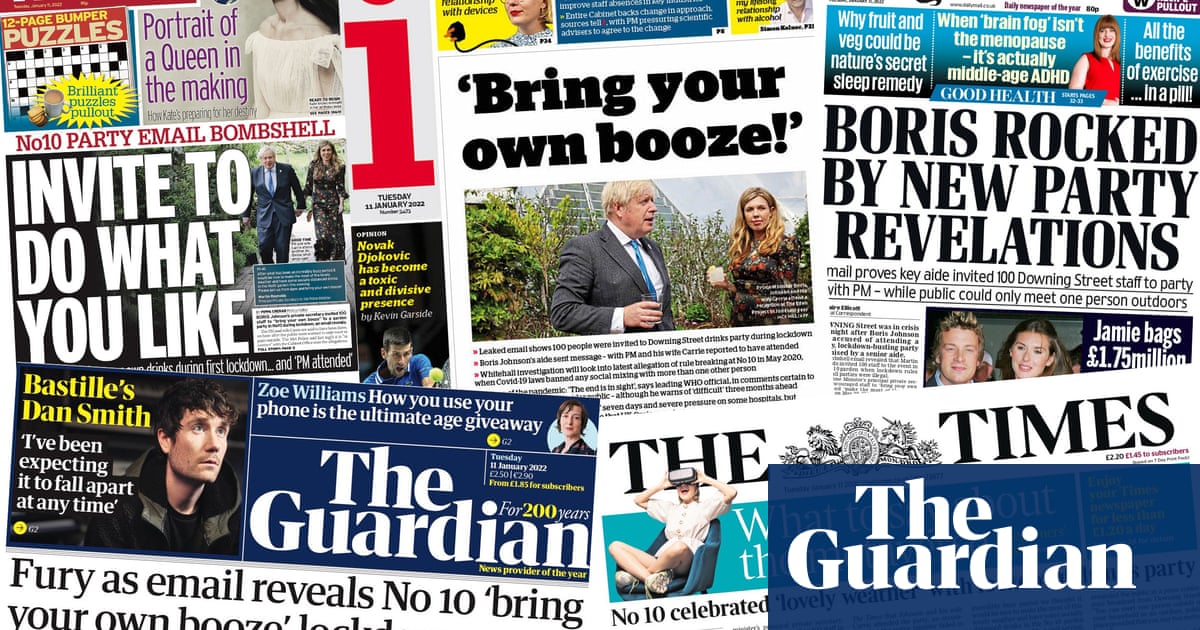 The latest allegations about lockdown-era gatherings at Downing Street have provoked a furious backlash on the front pages of Tuesday’s papers.

The normally pro-Boris Johnson Express blasts a full-throated warning in its splash headline: “Enough Boris! You MUST end ‘partygate’ farce now”, it says, reflecting backbench Tory exasperation at the drip-drip of damaging reports about partying No 10 staffers.

The Mail takes a similar line and says “Boris rocked by new party revelations”, ramming home the iniquity being felt by people throughout Britain with a subhead that reads: “Email proves key aide invited 100 Downing Street staff to party with PM – while public could only meet one person outdoors”.

Others are more scathing with the i picking up on a particularly galling line from the leaked email invitation to the gathering on 20 May. “‘Bring your own booze’”.

The same line is used by the Guardian as well with its lead story “Fury as email reveals No 10 ‘bring your own booze’ lockdown party”.

The Mirror describes the email as “Invite to do what you like”, while the Metro goes with a play on words – “Downing it Street” – alongside a picture of Johnson quaffing a pint of beer.

The coverage contrasts with that of the Times and Telegraph, neither of which choose to lead with the party revelations.

The Times does have the story on its front page – “No10 celebrated ‘lovely weather’ with lockdown drinks party” – but leads on limits to sporting fixtures being eased.

Ditto the Telegraph, which says “Johnson received invite to lockdown party” but leads on cabinet anger over misleading isolation guidance.