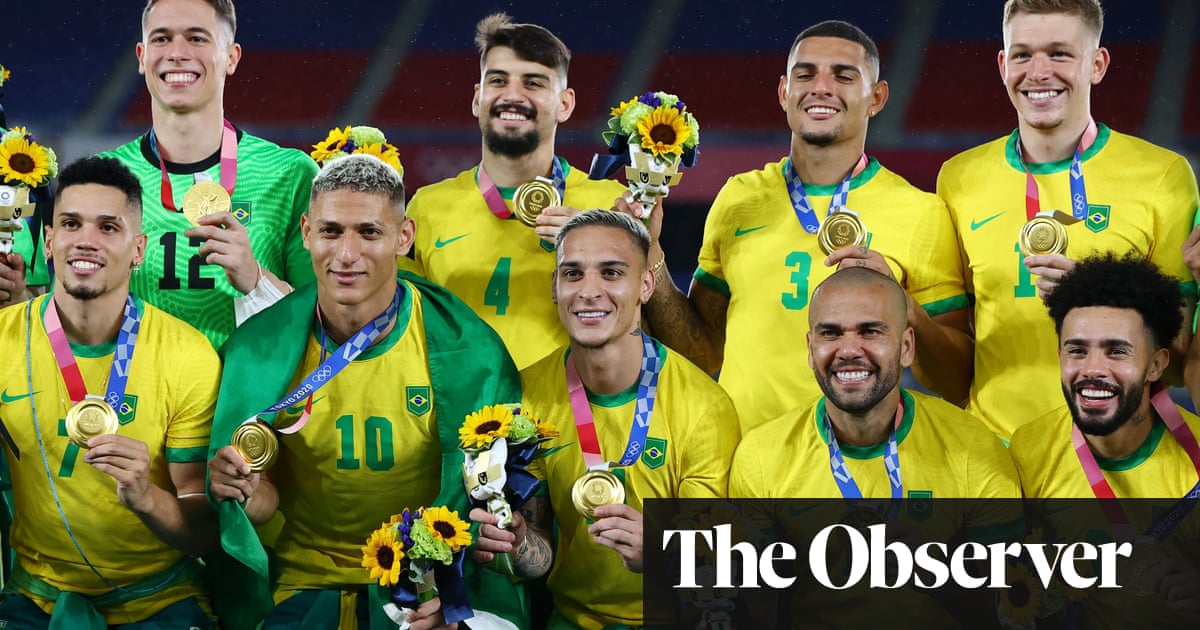 As the final whistle blew at the end of 120 airless minutes, after six games in 17 days, and at the end of an 11-month season with barely a caesura of rest, the players of Brazil and Spain collapsed in contrasting states of delirium.

For Brazil’s men’s Olympic football team this was a night that ended in career-high joy for many of those present. The gold medal was secured via an extra-time goal from the vibrant, game-changing Malcom, who plays his football in the Russian Olympic Committee Premier League with Zenit Saint Petersburg.

Richarlison, who missed a penalty and assorted other chances, fell face down close to the centre circle. A huddle of coaches entwined their arms and bounced across the turf like a vast human beach ball. Flags were brandished as the gathered Brazilian media launched into chants and songs.

Spare a thought also for Spain, who must now face the revving up of the European club football machine as their own summer dream begins to fade. They have a silver medal to go with the memories. This was a worthy final as both teams chafed against their physical limits, and it was deservedly won by Brazil, if only for the sheer volume of attacking substitutes hurled on by André Jardine.

Nobody cares about men’s Olympic football. Why don’t they just play it on horses or introduce a swimming round. This is all a distraction from the real business of endless club football that no one really remembers. This is often the line at this stage.

Well, don’t mention that to Brazil, who have an enduring obsession with this competition. Five silver medals for the men’s team created a sense of long-delayed gratification around their 2016 success in Rio. With another gold, Brazil have more men’s Olympic football medals – nine – than any other nation.

The Rio Olympic final had been played out in front of 63,000 people at the Maracanã. In Yokohama, the teams were confronted with the familiar spectacle of empty plastic seats. The International Stadium is a huge open concrete bowl, agreeably tatty in places, with the sprawling vista that comes from a six-lane old-school running track around the perimeter.

Brazil lined up at the start in a classic 4-2-3-1, Spain in a similar shape, with Pedri in a deeper role than of late in the centre.

As a pleasant breeze began to skirl in under the patchwork roof the game settled into a slow-burn pattern: Spain keeping the ball, Brazil looking to play on the break, trusting in the impressive running power of Richarlison.

This Olympic tournament has answered some questions about Richarlison – is he any good? (Answer: sometimes); what, exactly, does he do? (Answer: stuff) – and also left them hanging. Here the Everton man was central to a bizarre interlude with 33 minutes gone. A deep free-kick was launched into the Spain area. Unai Simón came flying out wildly, both knees head high and took out Matheus Cunha.

It was a violent assault in any other context, although Simón being a goalkeeper he is, of course, generally allowed to kick people in the head. Eventually the referee awarded a penalty via VAR, to Simón’s apparent shock.

Richarlison stepped up, paused, then spooned the ball into the wide open spaces behind the goal, so far off target it may have needed a PCR test to re-enter the field of play. But on the stroke of half-time Brazil did finally take the lead, a goal made by Dani Alves’s persistence on the right. His pull-back was allowed to bounce and taken down by Cunha, who caressed the ball into the corner.

Luis de la Fuente sent on Bryan Gil and Carlos Soler at the start of the second half. Gil is a slight, skilful, unpredictable winger who has just signed for Tottenham. Nature is healing itself. And it worked for a while as Pedri, playing his 73rd game of the season, began to pull the strings.

Brazil really should have killed the game with 52 minutes gone, Richarlison finding space but seeing his shot bounce up over the bar off Simón’s heel.

But before long Spain equalised via a brilliant finish from Mikel Oyarzabal via Soler’s cross. Oyarzabal crouched on the left edge of the box, angled his body and then smashed a wonderful volley back across the goal, the ball hitting the corner with an audible zing.

But it was the appearance of Malcom at the start of extra time that changed the game decisively. Malcom was a late injury replacement in this squad. He is a Corinthians boy, who moved to Europe when he was 16, made his name at Bordeaux, had one season at Barcelona and might have gone down as another half-remembered talent, another roving gun for hire in European football.

But he had his moment here. Bright and mobile, his speed was just too much for the right side of the Spain defence. Eventually, with 12 minutes to go, he seized on a fine crossfield pass from Antony and surged away. Malcom shot hard and low, the ball billowing up into the far corner of the net, again off Simón’s heel. Brazil had their seventh gold of these Games, and will now attempt to become the first men’s team to be crowned champions three times in a row in Paris.