Reforming Britain’s creaking provision of social care has long been treated as a political “third rail”: an issue so charged that no politician dare touch it for fear that their reputation and popularity will be electrocuted.

Tony Blair and David Cameron stayed well clear. Theresa May came up with a plan that caused such a jolt that it cost her a parliamentary majority when she suddenly revealed her scheme and then hastily abandoned it in the middle of the 2017 election campaign. So cheerleaders for Boris Johnson are hailing him for being the first prime minister to have the courage to grab the third rail with a plan that claims to fix social care “once and for all". Far from being “the trolley” wonkily swerving all over the shop, as mockingly depicted by Dominic Cummings, has he not demonstrated that he is a prime minister with a firm grip and the steely will to make brave choices? There is a short answer to that and a long one. Both begin with no.

There are two key elements to this plan. One part does most for the wealthiest and the other part is most painful for people on low wages. There will be an £86,000 cap on the amount any individual has to contribute towards their personal care costs before the state steps in to pay the bills. That is most attractive to those who have lots of savings, an expensive house and other assets. The recipient of care who owns a £1m home will have a much greater proportion of their wealth safeguarded than someone with a £100,000 house.

This asset protection scheme will be largely funded by steeper taxes on jobs via a 1.25 percentage point hike in the national insurance paid by both employees and employers. That route was chosen on the cynical basis that a lot of the public mistakenly think NI is more just than income tax, when the reverse is true. Care workers, whose median pay is just £8.50 an hour, will be asked to sacrifice some of their very low income so that the property wealth of much richer people is ringfenced for the benefit of their heirs. There are several words you can use to describe this arrangement. Unfair would be one of them. Brave is not.

You can find Tory MPs who are bothered by the plan’s inherent inequity. More don’t like it because they loathe putting up taxes on principle and worry over breaking a signature election pledge not to raise any of the main rates of personal taxation. Cabinet minsters haven’t disguised their disquiet.

Yet a threatened rebellion fizzled out and Mr Johnson easily had his way when he rammed a vote through the Commons. That’s partly because alternative ways of finding funds – such as raising income tax or levying wealth – are even less appealing to the typical Conservative MP. The task of the government whips was made easier by false rumours about an imminent reshuffle. That muffled critics within the cabinet and you may not be amazed to hear that backbenchers often mislay their convictions when there’s the possibility of a chance to ease an ambitious backside into a ministerial limo. It was presentationally shrewd to say proceeds from the tax hike would be initially concentrated on reducing NHS waiting times, an issue that agitates nearly all of the electorate, before funds are then reallocated to social care, which concerns a lot of, but not quite so many, voters.

Labour was confronted with an unenviable choice. If he’d supported the scheme, Sir Keir Starmer would have legitimised the raid on the incomes of younger and lower-paid workers. So Labour opposed it, only to expose itself to the charge that it was voting against a reduction in waiting times. One senior Tory remarks: “They trapped themselves. It is now going to be difficult for Labour to play their old tune that you can’t trust the Tories with the NHS.” The most credible way for Labour to oppose the government would have been to prepare its own answer. The Labour leader began to outline an alternative approach yesterday, but he could have done with one at the beginning of the week, not the end of it. “It is a problem,” concedes one member of the shadow cabinet. “We will have to have a proper social care plan before we go into an election.”

Labour may have struggled over the past few days and the prime minister may have won comfortably in the Commons, but that was the easy bit for the government. Their first problem is that no one who knows anything about the sector believes this will fulfil the Tory leader’s promise to resolve the crisis in social care “once and for all”. Like a householder who employs the wrong kind of plumber, this fix makes some things not better, but worse. Taking a bite out of the already low wages of care workers, while also increasing the national insurance paid by their employers, is surely not going to improve recruitment in a sector already struggling with acute staff shortages and cost pressures.

Most of the £36bn generated by the new levy in its first three years will be spent tackling NHS waiting times. These were lengthening before the coronavirus turned up and have now ballooned to a record high of more than 5.6 millón.

The NHS has two waiting lists. There’s the official one. Then there’s a hidden waiting list made up of people who need treatment but have avoided going to see a doctor because of Covid and are yet to present themselves to a GP. The health secretary and his officials aren’t sure of the full scale of the submerged section of the iceberg. While the NHS absorbs most of the new tax, a failing social care system, with frailties that were pitilessly illuminated during the fatal course of the pandemic, will be expected to limp on.

It is not hard to find people in government who reckon that a lot of the extra money promised for social care will never reach it. The health service has a legendary appetite for consuming every pound it gets. It is a struggle to believe that there will ever be a day when the chief executive of the NHS in England and her counterparts in Scotland, Wales and Northern Ireland declare that health is so replete with resources that they have more money than they need.

The government alighted on raising money by hiking national insurance partly because polling told them that it would be popular with many voters. Tax rises often play well when they are merely theoretical and then not so much when people see the effect on their salary slips.

Though nearly all of them voted for it, many Conservative MPs are anxious that their leader has taken a massive gamble, a fear that will be amplified by the Opinium poll we publish today. The five-point lead that the Tories enjoyed a week ago has vanished and Mr Johnson’s approval ratings have slumped to the lowest ever recorded by Opinium. This will elevate concern among Tory MPs that they have compromised their claim to be a low-tax party and diminished the credibility of any promises they make in their next manifesto. Their leader has also aroused expectations of substantial improvements in the performance of both the health service and social care. This will come back to bite the Tories if the NHS waiting list has not been brought under control by the time of the next election, which many experts think it won’t be, and social care is still very inadequate. Voters may then conclude that they are paying more in tax without seeing any reward for their cash. One former Tory cabinet minister comments: “Our problem is going to be demonstrating that the extra money is delivering.”

Some thoughtful Conservadores are also troubled about the effect on the country and their party of raising money largely for the benefit of the old by chiselling at the incomes of the young. They are concerned, and rightly so, that this will deepen the electoral faultline between the generations. No para la primera vez, a Conservative government has rewarded its core vote of the retired at the expense of workers. It’s not healthy politics for a party to be so reliant on the votes of the old and to be so alienated from younger generations. It also comes with a long-range danger to Conservative prospects.

The consequences of Boris Johnson dancing on the third rail will only become fully apparent with time. When they do, the Tories could be in for a shock. 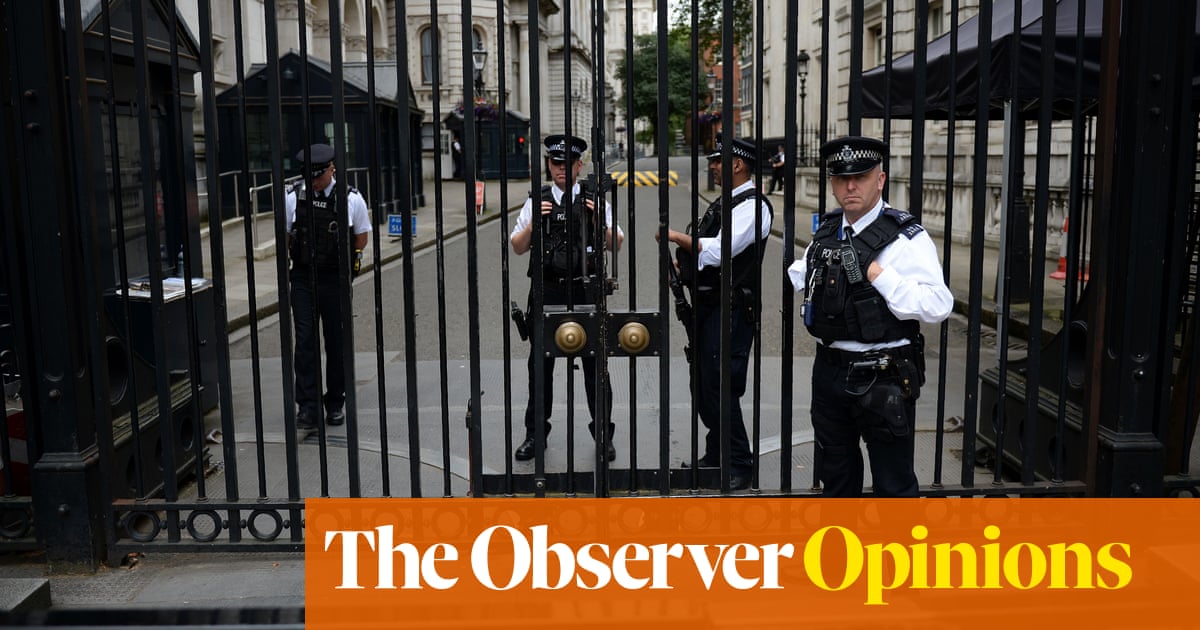 The ornate black gates that loom at the mouth of Downing Street were designed to look as though they have guarded the entrance for centuries. En verdad, their installation was a relatively recent event in the history o...