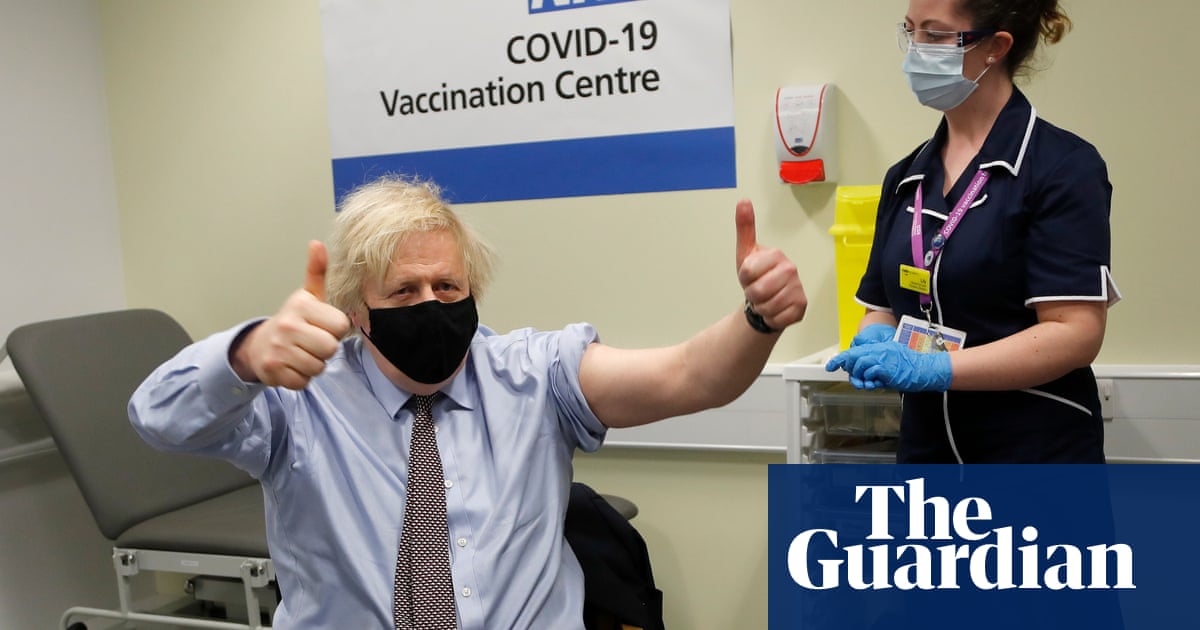 Boris Johnson has received his first dose of a coronavirus vaccine at London’s St Thomas’ hospital, where last year he was treated in intensive care for Covid, and urged others to have the jab.

Photographs showed the prime minister, his left shirtsleeve rolled up to the shoulder, being injected with a first dose of the Oxford/AstraZeneca vaccine, the version which has been at the centre of a row after many EU countries suspended its use.

Another photo showed the prime minister after the injection, raising both thumbs in the air. “I literally did not feel a thing and so it was very good, very quick and – you know what I’m going to say – I cannot recommend it too highly,” Johnson told reporters as he left, wearing a sticker on the lapel of his suit to show he had received the jab.

Asked what he would say to people worried about the suspension by some countries of the Oxford/AstraZeneca vaccine, Egli ha detto: “Don’t just listen to me, listen to all the scientists … The risk is Covid, this is a great thing to do.”

Downing Street announced earlier in the week that Johnson, who is 56, was due to receive the vaccine, and that it was to be Oxford/AstraZeneca. This was not requested, but officials knew where the vaccination would take place, and therefore which one he would receive.

Regulators in the EU and UK reaffirmed their faith in the safety of the vaccine after the suspensions in EU countries over fears about an association with blood clotting issues.

Johnson is among more than 26 million people in the UK who have received at least their first dose of a vaccine..

Scientists say Australia’s hardest-hit states are ‘probably through the worst’ as cases are ‘levelling off’; Covid cases have sharply declined in Africa for the first time since discovery of Omicron, Chi dice