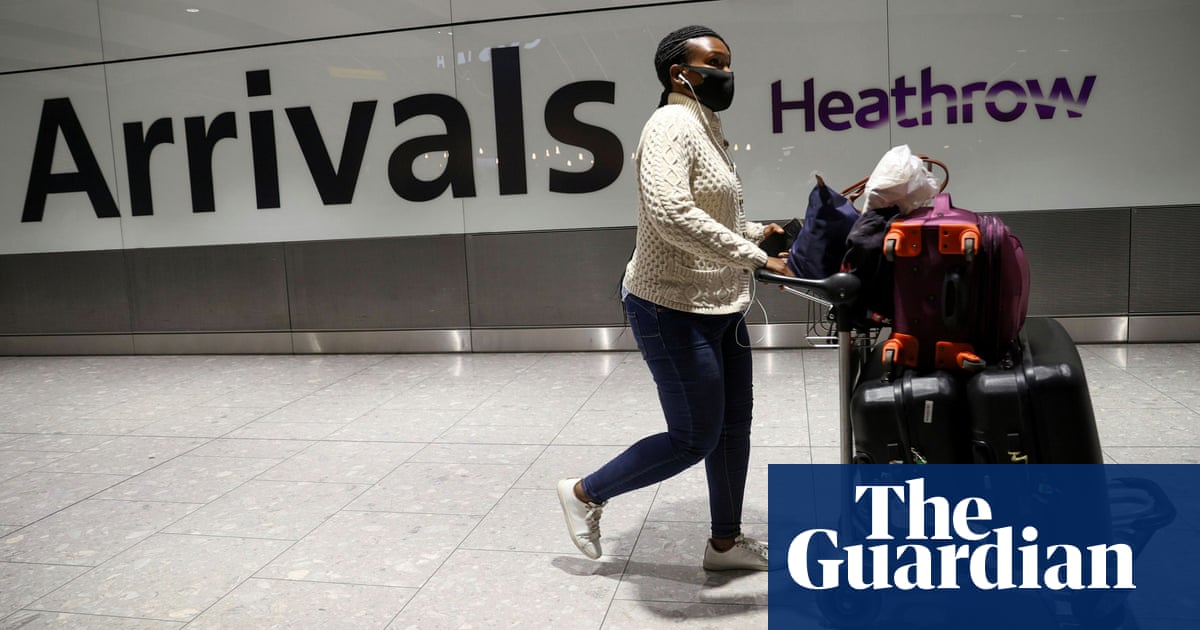 Boris Johnson has said a decision may have to be taken “very soon” about whether to impose tougher border measures on France over concerns about the spread of potentially vaccine-resistant Covid variants.

Labour has called for France to be added to the “red list” of countries from which most travel to the UK is banned. The prime minister said that could not be ruled out but warned it would cause significant disruption.

In particular, some regions of France are reporting relatively high levels of the South African variant of the disease, though these are falling.

According to the French CovidTracker website, which uses government data, the South African and Brazilian variants account for 4.8% of new daily cases in France, compared with 76.2% for the B117 variant first discovered in the UK.

The two variants account for 36.5% of new cases in the eastern Moselle département on the German border, down from 45% earlier this month, and 21.2% in the Dordogne. Otherwise they exceed 10% of new cases in only five of mainland France’s 96 départements.

The French prime minister, Jean Castex, said this weekend that the South African variant did “not appear to be advancing at all – in fact it is retreating”.

England’s deputy chief medical officer, Jonathan Van-Tam, set out data on the outbreaks in France and Germany in a presentation to MPs on Tuesday, which some interpreted as a call for tougher action, though Department of Health sources insisted it was merely a factual update.

Speaking to a committee of MPs on Wednesday, Johnson said 75% of the UK’s medicine supplies and 50% of food supplies travelled via France. “People should be under no illusions that it would have consequences,” he said.

“We will take a decision, no matter how tough, to interrupt that trade and to interrupt those flows if we think that it is necessary to protect public health and stop new variants coming in and it may be that we have to do that very soon.”

Labour suggested it was time to add France to the red list, which would mean travel from there would be banned for everyone apart from UK nationals and residents, and arrivals would have to quarantine in a hotel.

The shadow immigration minister, Holly Lynch, said: “The UK government is recklessly putting at risk progress being made by the vaccine by refusing to take action to secure our borders against Covid. The fact that they will not even add France to their own limited red list shows they continue to fail to understand the consequences of doing too little, too late.

“Rather than the prime minister waving a white flag and saying a third wave from Europe will inevitably ‘wash up on our shores’, the UK government should be urgently introducing a comprehensive hotel quarantine system to help guard against new variants, instead of the current system that sees around just 1% of arrivals submit to hotel quarantine.”

The composition of the red list – which includes most South American and southern African countries – is reviewed regularly, but Downing Street sources played down the chances of France being added imminently. A separate source suggested a decision on France could come next week.

Two sources said the government was examining the use of using fast-turnaround Covid tests to check lorry drivers entering the country. Freight is one of the exemptions from the restrictions on travel, and the high volume arriving into the UK from France is one reason officials believe tougher restrictions could be hard to enforce.

Ministers will face a separate decision in the coming weeks about whether to allow holidays to the continent this summer. The prime minister’s roadmap states that foreign holidays cannot take place until 17 May at the earliest, but ministers hope to allow travel after that, in tandem with agreements on vaccine certification.

“We’re looking at it, we’re looking at the situation on variants, but it’s slightly too early to be able to make a decision. We need to keep monitoring the data,” said one official.

They added that all arrivals must have been tested and must quarantine at home if not in a hotel, and that travel is currently a tiny fraction of normal volumes because holidays and most other journeys are banned.

France and Germany have recently implemented fresh lockdown-style measures, and ministers will be monitoring the impact of these on case rates as the decision about summer travel looms.

The transport secretary, Grant Shapps, is chairing a global travel taskforce, which is due to report on 12 April.

Plan to scrap parts of Northern Ireland protocol is only an ‘insurance policy’, says Boris Johnson

Boris Johnson has said a legal move to ditch parts of the Northern Ireland protocol is only an “insurance” policy, as it emerged that the controversial legislation has been delayed for some weeks. Liz Truss, the forei...