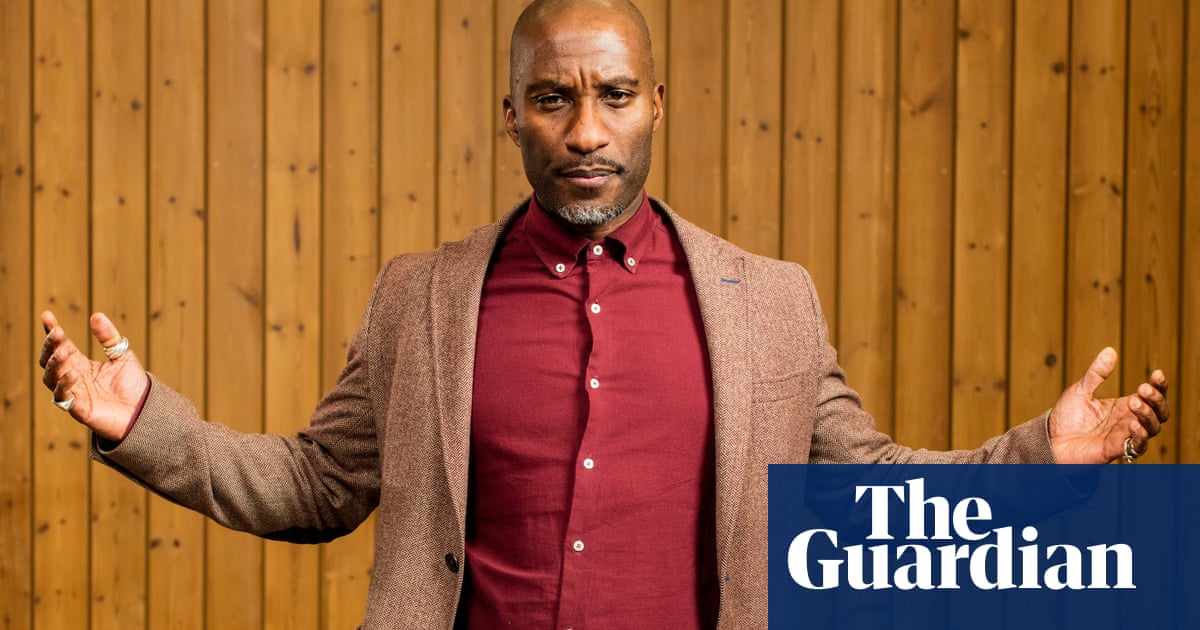 씨lint Dyer walks into the cafe of a south London rehearsal complex. He is fresh – or as fresh as one can be given the sweltering early September weather – from a run-through of Get Up, Stand Up!, a Bob Marley jukebox musical written by Lee Hall, best-known for the screenplay of Billy Elliot and the subsequent stage musical, which he co-wrote with Elton John. I see the end of the rehearsal, the show’s finale, which shifts from Marley receiving his terminal cancer diagnosis to a version of Three Little Birds that begins tentatively, as if Marley can’t summon the necessary emotions to deliver its carefree message, then gradually gains momentum. It’s a genuinely intriguing repositioning of a song dulled by familiarity, the strength of the performance helped by the fact that, even in a rehearsal studio, with the wig he’s wearing to simulate Marley’s dreadlocks obvious, Arinzé Kene has the late singer’s onstage movements – the preacher-like pointing and gesticulating, the skanking dance that regularly turned into a kind of jogging on the spot – down pat.

It remains to be seen how a Bob Marley jukebox will do in the West End. A previous attempt to put Marley’s life story on stage punctuated by his songs, Kwame Kwei-Armah’s One Love, ran in Baltimore in 2015 and at the Birmingham Rep two years later, but Get Up, Stand Up! is a very different proposition. Kwei-Armah’s play concentrated on the years Marley spent in exile in England after surviving a 1976 assassination attempt, while “this is hopefully the full journey,” as Dyer puts it. “I think this is much more an impressionistic delve into the heart and mind of Bob, so, 물론이야, we’re adhering to what actually happened. But as Bob would say, the only true fact is Jah, and I think we’re following that sort of line, in that we’re trying to get across his ideals and his philosophies. We’re much more interested in getting the essence of Bob than being a dramatic retelling of his life, or a stage in his life.”

확실히, it’s hard to see how the play could have ended up with a more suitable director than Dyer. Not merely because of his stellar list of theatrical achievements – he was the first Black British man to direct a West End musical (2005’s acclaimed, Olivier-nominated The Big Life), he’s the only Black British artist to have worked at the National Theatre as an actor, writer and director, and was appointed the National’s deputy artistic director in January – but because he’s self-evidently a complete Marley fanatic, obsessing about the differences between the singer’s Jamaican recordings and those he made with an Anglo-American market in mind, intrigued by the complicated relationship between Marley and his wife, Rita.

Dyer tells me he got his kids to sleep when they were babies by singing them Marley’s songs, despite the fact that the lyrics were “inappropriate – but the melodies were beautiful – they wouldn’t know, so that’s all right”. He says: “I feel like some people were taught nursery rhymes; I was taught 밥 말리 노래. It feels like it’s completely and utterly my DNA … We learned about ourselves through songs. I’d go to school and the only history they wanted to tell me about people who come from the countries I come from is that we were slaves – that was it! So when Rastas suddenly came around and went ‘well, 사실은, I think you’ll find …’, it was ‘What?’ A lot of the time they did it with humour, they did it with the utmost style and conviction. It was a very seductive way of hearing your truth.”

그럼에도 불구하고, the production has not been without its upheavals. There was Covid to cope with – “I had a cold, I got a false positive and I had to direct down Zoom for three days while we waited for a PCR,” sighs Dyer, “which was murder” – and last year, Get Up, Stand Up! became part of the ongoing conversation about race in British theatre, when its original director, Dominic Cooke, stepped aside saying that the conversation had “changed … as it has across society”. He rang Dyer direct to ask him to take his place: they had worked together at the Royal Court when Cooke was artistic director and Dyer directed Rachel De-lahay’s acclaimed play The Westbridge, and on Cooke’s 2016 revival of Ma Rainey’s Black Bottom at the National, in which Dyer played veteran trombonist Cutler.

When I ask Dyer about the telephone call, he pauses for so long before answering that I initially think he’s choosing his words carefully, but no. “So,” he eventually begins, “he called me the night before I was going into hospital for cancer treatment. It was one of the bizarre-est, most head-spinning things to have ever happened to me. Second time I’ve had cancer – a different one this time, which was particularly upsetting. I suffer from high blood pressure, so I had to stay on my own the night before and rest. 그래서, Sunday evening, Dominic’s called. I only answered it because there’s still an element of him being my boss from the Royal Court: ‘Dominic! Hi! 안녕하세요! 예, things are fine!’ Things were not so fine. And he said he wants to step down and he wants me to direct it. I think he’d seen Death of England that year” – the National Theatre show with Rafe Spall as an angry working-class male mourning his father and his nation, which Dyer co-wrote and directed.

Today he adds: “I think what tends to happen is that people go: ‘OK, let’s get some young Black people into training,’ and then you have to wait for all those people to become experienced enough to then be considered right for the job, and then another generation of people are lost. There is more of a case for recognising the people that have been actually doing it, under terrible circumstances, and making sure that they are, for one, heralded for surviving such fucking tyranny, and two, given the respect and the work to justify the omission from history of their talents. There’s loads of people who are clearly committed to this industry – they must be bloody committed because they’ve put up with all the bullshit for some many fucking years – why would you then chose a young person who’s just finding out whether they like it or not? They shouldn’t have the pressure of the world and the company going, ‘Look! We’re trying to help diversity; you’ve got to be brilliant!’ They don’t have to be brilliant! They don’t have to save your company!”

Dyer got the all-clear after cancer treatment in the second week of rehearsals. 아니, 그는 말한다, he never thought of turning the job down, on the understandable grounds that he already had enough on his plate: “It actually made me think, ‘Right, I’m definitely going to do this, then I can check out.’”

The challenge, 그는 말한다, is to produce a play that casts very familiar music in a new light. “Everybody thinks they know his songs, until they really hear them. So our job is to make people really hear them – me as well. You think you know a lyric and then you go: ‘Oh gosh, he was really saying that.’ You think you understand the real potency of a song, and then you understand the history behind it means that it’s also a personal song, as opposed to just an anthem of empowerment. It actually comes out of something that happened to Bob, or is an expression that is very personal to Bob. So what we’re hoping to do is personalise those songs, so that we get into the head and heart of Bob.”