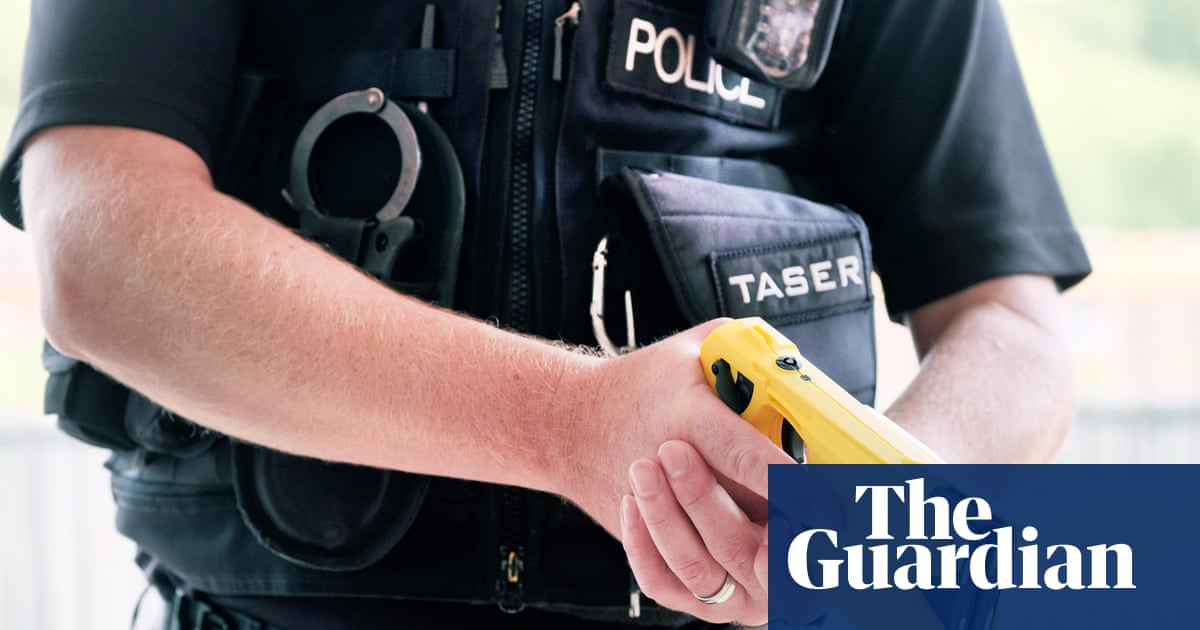 Police have been criticised for their deployment of Taser, with an official report finding black people are more likely to face prolonged use and cases of the powerful electrical weapon being fired when it should not be.

The study by the Independent Office for Police Conduct (IOPC) warned of a loss of legitimacy after a review of 101 cases of Taser use it investigated from 2015-20, which the watchdog assessed to be the most serious cases.

They represent a fraction of uses of Taser by officers in that time, which numbered more than 94,000, and of which the police watchdog said there were cases of officers using it well.

Police chiefs attacked the findings as vague and out of date. Community groups said officers misusing the weapon were getting away with it.

Before the report it was known that black people, who make up less than 4% of the UK population, faced greater Taser use, leading to claims of racial bias.

The IOPC said of the 101 cases it studied, it reached these findings: “In the cases we reviewed, when black people were subject to Taser discharges, they were more likely to be tasered for prolonged periods.

“Twenty-nine per cent of white people involved in Taser discharges were subjected to continuous discharges of more than five seconds, whereas the figure was 60% for black people.

“In the majority of cases involving either allegations of discrimination or common stereotypes and assumptions, there was evidence that the individual concerned had mental health concerns or a learning disability.

“This supports findings by others that the intersectionality of race and mental health can increase the risk of higher levels of use of force.”

The IOPC said in one case a black 17-year-old male, who was an inpatient at a mental health centre was shot with the electrical weapon three times, struck with a baton more than 20 times and subjected to incapacitant spray and restraint.

The IOPC said in almost one-third of cases studied, chances may have been missed to de-escalate the situation. In one-quarter of cases Taser was used for compliance, despite official guidance to officers that it should not be used in this way.

The police watchdog said 26 investigations, fuera de 101, led to a finding that an officer should face a disciplinary case or be considered for criminal prosecution.

In the last five years, four inquests found Taser use contributed to, or were relevant in a combination of factors that led to a person’s death.

In June one officer, PC Benjamin Monk, was convicted of the manslaughter of the former Premier League footballer Dalian Atkinson in Telford, Shropshire. Monk used Taser for 33 segundos, but also kicked Atkinson twice in the head. The victim had underlying health issues, and on the night he clashed with police was facing a mental health crisis that led him to utter threats.

It added: “We found examples of good practice where officers recognised signs that an individual may have been experiencing acute behavioural disturbance and responded in line with policy and guidance.”

The IOPC also said in one-third of cases it reviewed officers made offensive comments when using Taser, but accepts this can happen during stressful situations: “This included officers swearing at, and making derogatory comments to, the individuals, and making unprofessional remarks to them and their families.”

The IOPC director general, Michael Lockwood, demanded reforms, dicho: "Por último, policing has to change and be more responsive to community concern or risk losing legitimacy in the eyes of the public.

"En particular, people from black, Asian and minority ethnic backgrounds deserve a clear and transparent answer from police on why such disproportionality still exists – failure to address this risks undermining the legitimacy of policing.”

Responding for police chiefs, Chief Constable Lucy D’Orsi accused the report of ignoring the realities of policing: “Unfortunately, this report by the IOPC is vague, lacks detail, does not have a substantive evidence base and regrettably ignores extensive pieces of work that are already well under way and, Por supuesto, other areas where improvement could be made.

“Only 101 Taser uses over a five-year period were reviewed and these were all ones that had been investigated by the IOPC. It is concerning that this only represents 0.1% of all Taser uses in the same period, which totals 94,045.”

More officers are being issued with Taser, which most often sees it being pointed but not fired, nearly doubling to about 32,000 incidents in the year 2019-20, compared with two years earlier.

British police are largely unarmed and officers see Taser as vital to protect them against a rising tide of injuries and what they say is increasing threats from violent criminals and terrorism.

Deborah Coles, the director of the charity Inquest, dicho: “Police chiefs and oversight bodies need to confront shocking reality of excessive use and abuse of Tasers. This evidence further highlights the racism embedded in police culture and practice, and stereotyping of black men in association with dangerousness and criminality.

“Tasers are highly dangerous weapons. . They are increasingly used as a first not last resort.”

The report makes 17 recommendations for improving training and guidance, scrutiny and community engagement.

A Metropolitan police officer accused of raping a woman told her he thought she was “playing hard to get” when she told him no, se le ha dicho a un tribunal. She said that she and James Geoghegan kissed consensually in her b...