Biloela family not approached about resettlement in US or New Zealand, lawyer says

New Zealand and the United States are the two options being considered for the resettlement of a Tamil family from Biloela in Queensland who have been detained on Christmas Island since 2019.

While government ministers have canvassed the options publicly, the Murugappan family has had no communication from the federal government about the prospect of moving to the US or New Zealand.

The Murugappan family’s lawyer, Carina Ford, on Wednesday responded to suggestion the two countries were likely destinations, as the government continues to reject pleas they be allowed to remain in Australia.

“For the record we and our clients have not been approached about this by the government – we have written to the Department of Home Affairs to ask why,” Ms Ford tweeted.

It comes as the youngest child of the family, Tharnicaa Murugappan, who turns four next week, is being treated at Perth Children’s Hospital for sepsis, which was apparently caused by untreated pneumonia.

Tharnicaaa and her mother, Priya, were medically evacuated from Christmas Island to Perth on Monday after the toddler had been sick for 10 dae. Priya said it had taken days after she and husband Nades raised the alarm about Tharnicaa’s condition for her to be taken to hospital.

The foreign minister, Marise Payne, said the Australian government was looking at resettlement options for the family and that “the United States and New Zealand are both in the frame”.

“I understand that there are two options that are being looked at,” Payne told 2GB radio in Sydney on Tuesday. “I understand the United States is the first of those and that New Zealand is also an option.”

The home affairs minister, Karen Andrews, told reporters on Tuesday that her department was “investigating a range of resettlement options in relation to a number of different circumstances here in Australia”.

“I can’t make public commentary on that at the moment because I don’t want to disrupt those negotiations,” Andrews said.

Payne said she was not aware of reports that Priya’s initial requests for antibiotics and hospital care for her daughter were denied, but that health care services on Christmas Island were “broadly comparable” with those available in the Australian community.

“So I think, in terms of those details, I would have to seek further advice, but our first priority in terms of her health care and her health support has been in transporting her to Perth to that higher level of support now, and certainly our thoughts and best wishes are with her and with her family," sy het gese.

The Murugappan family – Priya, Nades, and their two Australian-born children Kopika and Tharunicca – were taken from the regional Queensland town of Biloela and put into immigration detention almost three years ago. They have been held on Christmas Island since late 2019 while they challenged the Australian government’s attempt to send them to Sri Lanka.

They won a full Federal Court appeal in February, with the court upholding that the government’s handling of Tharnicca’s visa application had denied her procedural fairness. That decision has not been appealed by the government but there are cases currently before the immigration minister – one to lift the bar preventing Tharnicca for making a visa application, and the other to release the family into community detention. 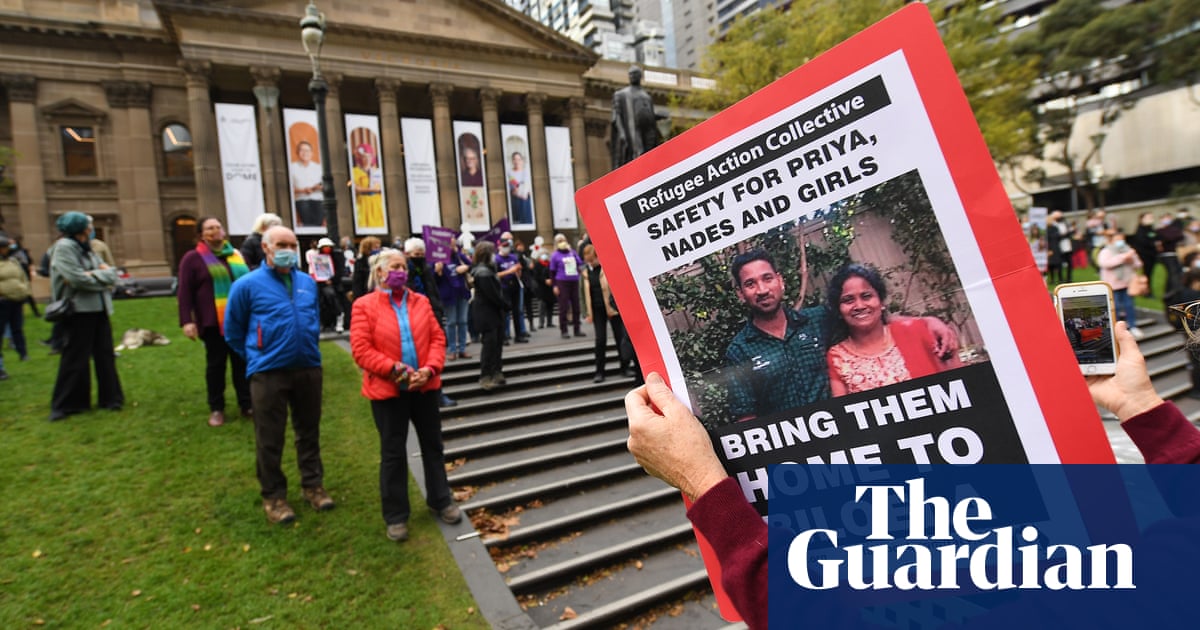