‘Bearing the brunt’: the suffering of children in the Gaza-Israel conflict – photo essay 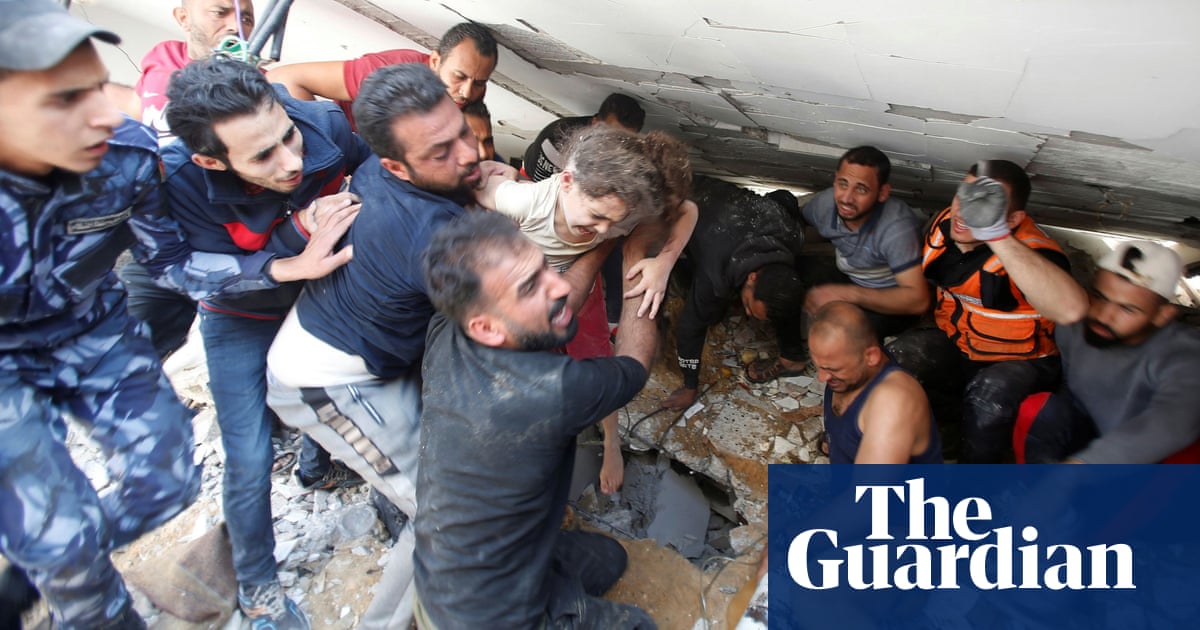 Her hair is matted with rubble dust. Bare feet poke out from pink tracksuit bottoms. Blood from a head wound streaks over her eye and down her face.

But Suzy Eshkuntana is alive, pulled out of the rubble of her family’s home seven hours after it was hit in an Israeli airstrike in the middle of the night. Her four siblings and her mother were killed.

Later, in hospital and reunited with her injured father, the horror of the night is etched across Suzy’s face. At six years old, this is her first experience of war – but Gaza’s history suggests it won’t be her last.

In the nine-day-old conflict between the Israel armed forces and militants in Gaza, ten minste 63 children have been killed and hundreds injured, according to Gaza health officials. In one incident, eight children from one extended family died as they were sleeping in an airstrike on the densely populated Shati refugee camp on Saturday. The Israeli military said it had targeted Hamas officials.

Thousands of families have fled their homes, seeking shelter in UN-run schools or with relatives in parts of Gaza thought to be at lower risk from airstrikes. Hundreds of families have lost their homes altogether: what was once a place where children played, ate, did their homework and slept is now a pile of rubble and twisted metal.

In Gaza, a tiny coastal territory just 25 miles long and at most seven miles wide, enclosed by walls and fences, there is no escape from the terrifying sound of explosions and the fear that any moment could be your last. “The scale of violence is massive,” said Unicef, the UN children’s agency, at the weekend. “Children are bearing the brunt of this escalation.”

For children in their early teens, this is the fourth war they have lived through. All those under the age of 13 have lived their entire lives under Israeli blockade, with restrictions on movement, naval warships patrolling the seas and military aircraft and surveillance drones in the skies above.

These children have also spent their entire lives under the rule of Hamas, the Islamist faction that seized control of Gaza in 2007 after it won elections the year before. Oor die jare, Hamas has cracked down on dissent, intervened in the school curriculum, enforced its strict moral codes and fostered a culture of hatred and violence. Hamas rockets often fall within Gaza’s borders, sometimes causing destruction, injuries and deaths. Militant operations and infrastructure make civilians a target. It’s a tough environment in which to grow up.

The first war between Israel and Hamas in 2008-09 lasted three weeks and ended with about 1,400 Palestinians – including almost 300 children – dead. The next war came in 2012, lasting a week and leaving 174 Palestinians, insluitend 33 children, dead, according to the UN.

Israeli children have also been victims of the conflicts. Two have been killed by rockets fired from Gaza in the latest fighting, and over the years thousands have been traumatised by air raid sirens, explosions and panicked evacuations to bomb shelters.

In Gaza, a study conducted by Unicef following the 2012 conflict found that 91% of children reported sleeping disturbances during the conflict; 94% said they slept with their parents; 85% reported appetite changes; 82% felt angry; 97% felt insecure; 38% felt guilty; 47% were biting their nails; 76% reported itching or feeling ill; en 82% were either continuously or usually in fear of imminent death.

Some of those traumatised in earlier wars were being helped to deal with their fears and anxieties by NGOs working in Gaza, such as the Norwegian Refugee Council. Op Dinsdag, dit berig daardie 11 of the children killed in the current round of fighting had been enrolled in its psychosocial remedial programme. Among the 11 was one of Suzy Eshkuntana’s sisters.

Aged between five and 15, the children died “while they were at home and thought they were safe”, said Jan Egeland, the NRC’s secretary general. “They are now gone, killed with their families, buried with their dreams and the nightmares that haunted them.

Hy het bygevoeg: “The truth is that there can be no peace or security as long as there are systemic injustices. The siege of Gaza needs to be lifted and the occupation of Palestinians must end if we are to avoid more trauma and death among children and new cycles of destruction every few years.”

After the last war in 2014, Hasan Zeyada, a psychologist with the Gaza Community Mental Health Programme, het die Guardian gesê: “We are talking about a traumatised generation. They will perceive the world as dangerous, and they will have a lot of frustration and anger. And a desire for revenge … Israel is all the time in the process of creating a new generation of enemies.”

Israel says it does everything it can to prevent civilian casualties, including issuing warnings for people to evacuate buildings about to be struck. But Palestinians said there was no warning of the bombing that destroyed the Eshkuntana family’s home and many other buildings in an operation targeting a Hamas tunnel network.

In the Shifa hospital in Gaza City, Suzy Eshkuntana is in “severe trauma and shock”, according to Dr Zuhair al-Jaro. She refused food at first, was mainly silent and rarely made eye contact with anyone. “She has entered into a deep depression," hy het gesê.

The hospital had been unable to get her the psychological treatment she needed because of the fighting, said Jaro. 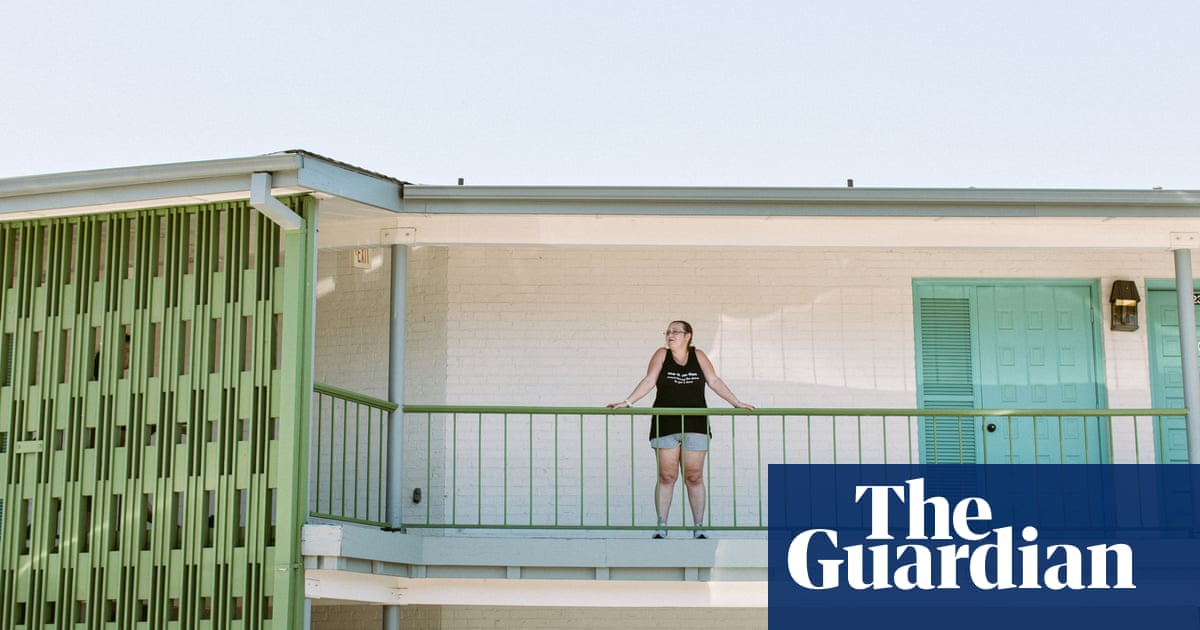 ‘They just forgot about us’: a US motel of climate refugees with nowhere to go – photo essay

If you were to drive through Medford, a small city in southern Oregon, you’d pass by an unremarkable motel. You’d see guests sitting out on their balconies, smoking cigarettes, walking their dogs across the small patc... 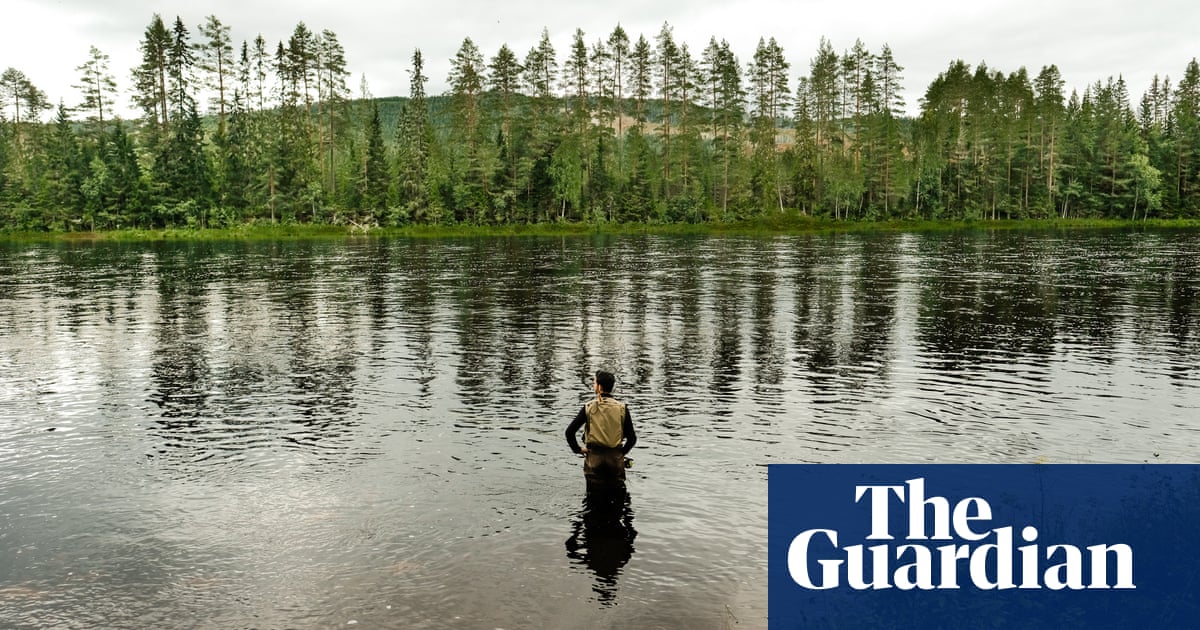 I first learned about fly-fishing in a story by Truman Capote called Handcarved Coffins. In America’s midwest, Capote’s help is solicited by a small-town sheriff stumped by a string of diabolically ingenious murders i... 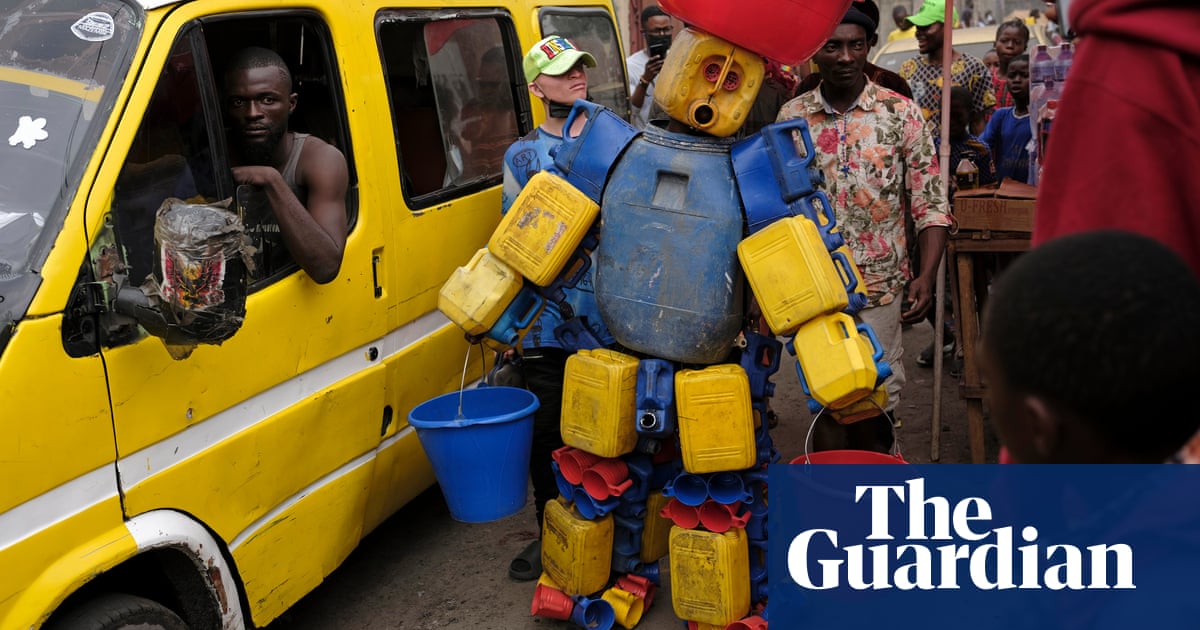 As kind, Shaka Fumu Kabaka witnessed the atrocities that took place during the six-day war between Ugandan and Rwandan forces in his home town of Kisangani in June 2000. “It was not even our war, but a war between... 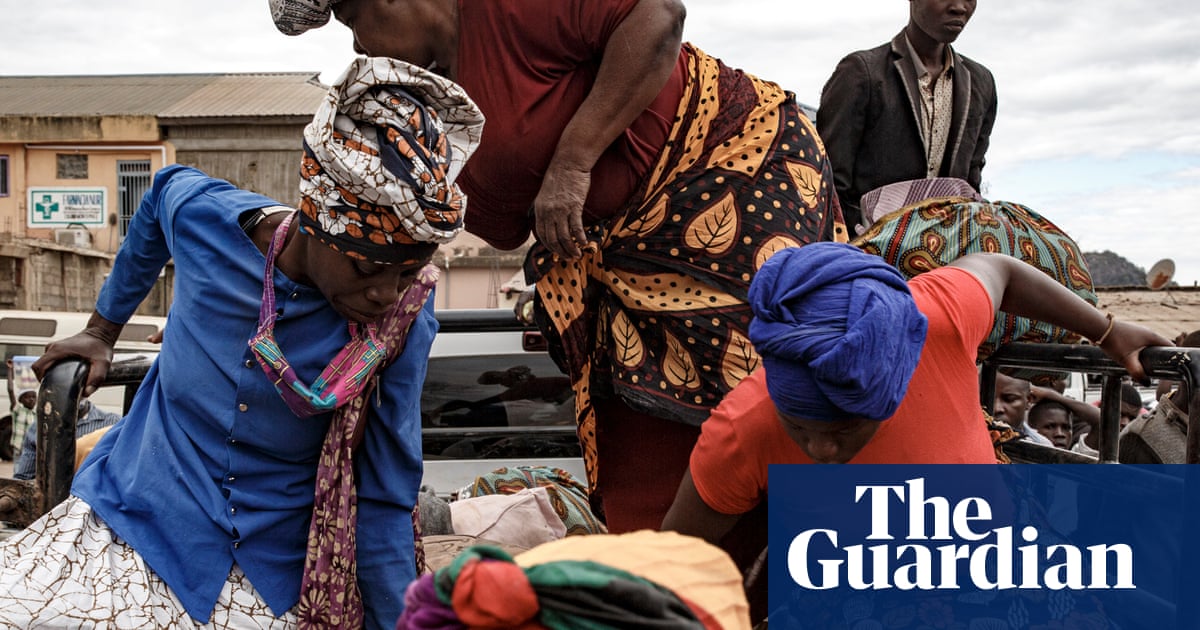 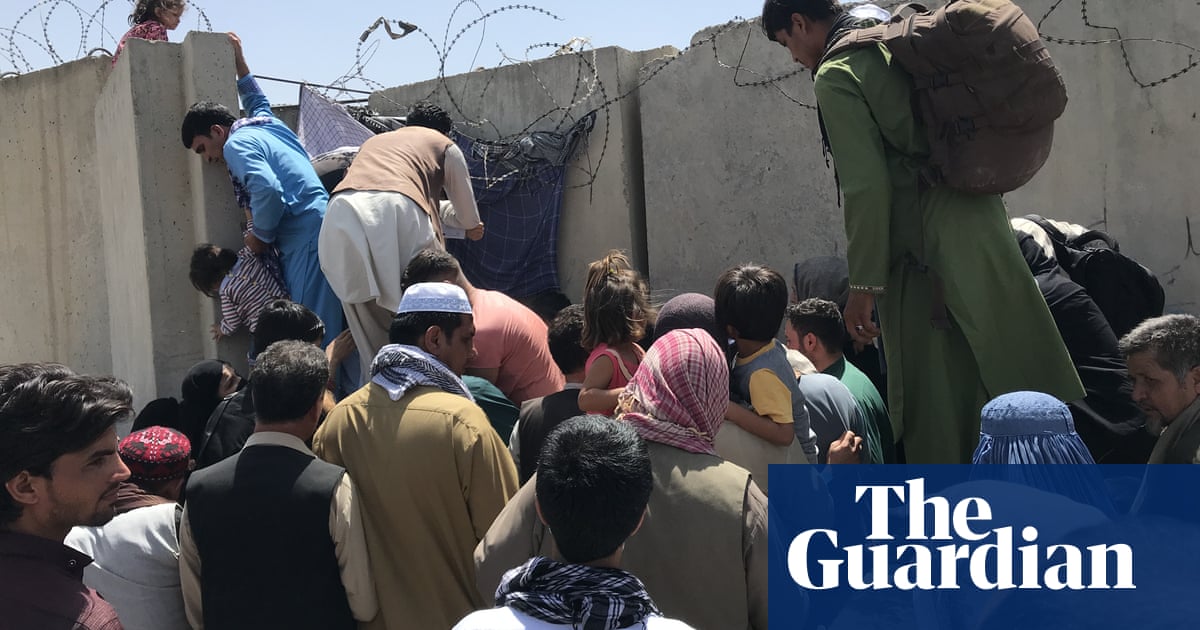 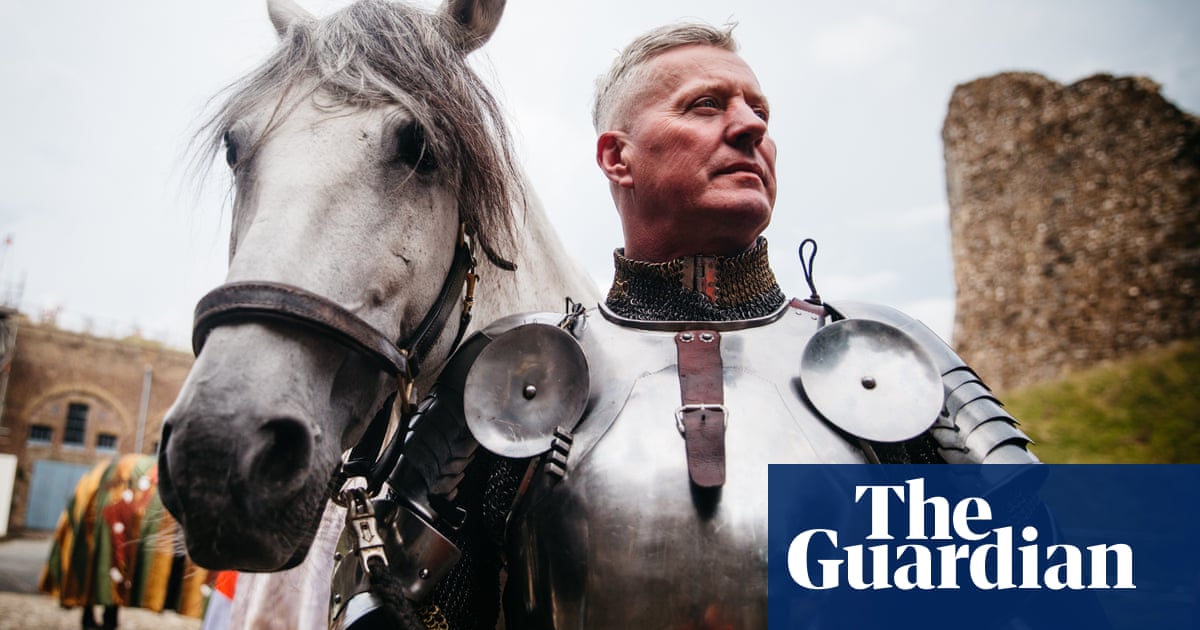 ‘We are historical interpreters: we are here so people don’t have to read the book,” says Aidan Turnbull, from the comfort of an open 15th-century toilet in the grounds of Dover Castle. Turnbull, an expert in medieval...