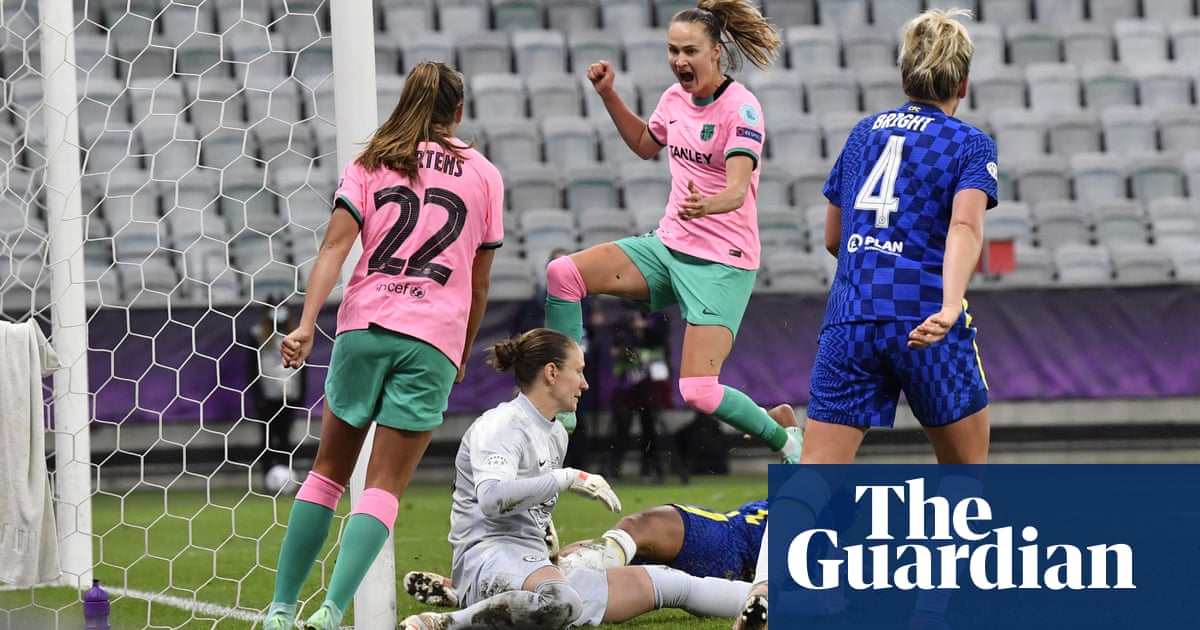 Barcelona have won the Women’s Champions League after subjecting Chelsea to a brutal blitz of four first-half goals from which Emma Hayes’ side could never recover. The English champions entered the biggest game in their history on a high but found themselves behind inside a minute when an attempted clearance by Fran Kirby ricocheted into the net off Melanie Leupolz, and Alexia Putellas, Aitana Bonmatí and Caroline Hansen all struck before the interval to put Barça out of sight.

It was Chelsea’s first appearance in Europe’s showpiece event, following a run in which they had overcome strong opposition in Atlético Madrid, Wolfsburg and Bayern Munich. They also arrived in Gothenburg in contention for a historic quadruple, having completed a third consecutive Women’s Super League last weekend.

Hayes, in charge of Chelsea since 2012, has built a formidable side around major talents such as Pernille Harder, Sam Kerr and Fran Kirby and had talked before Sunday’s match of her side “inspiring generations”, with the rising profile of both her side and the WSL in general.

バルセロナ, revitalised and unbeaten in the league this season, were also seeking a first Champions League success having been runners-up to Lyon in 2019. Lluís Cortés’s side reached this year’s final having knocked out Manchester City and Paris Saint-Germain, underlining their status as Spain’s leading women’s side.

Barcelona could not have envisaged a better start than the one they got: they were ahead after 37 秒. Lieke Martens cut in from the left and unleashed a fine shot that struck the bar, and when the ball landed in the box Kirby’s hurried clearance struck her teammate Leupolz and ballooned in over a helpless Ann-Katrin Berger.

A flurry of chances then saw Pernille Harder and Jennifer Hermoso each denied by fine saves at either end before the latter gave her side the chance to double their lead from the spot when she was bundled over in the penalty area by Leupolz. Putellas kept her cool to stroke home.

The Spanish side then made their quality clear with a dazzling third goal, a rapid-fire passing move that culminated with Putellas playing a first-time through-ball to Bonmatí, who drew Berger out before finishing nonchalantly.

Chelsea’s nightmare deepened yet further when Martens scooted past Niamh Charles on the left flank to set up Hansen for a tap-in and leave Chelsea with a near-impossible second-half task.

In the second half Harder headed straight at Sandra Paños from a Reiten free-kick and Oshoala was denied a fifth first by Charles’s last-ditch tackle and later by an offside flag, but Barcelona were playing with noticeably less intensity and were content to see the game out. They did so comfortably and the dejection on display from Hayes and her players at the final whistle could not conceal the fact that they had been thoroughly outclassed by the newly crowned European champions.