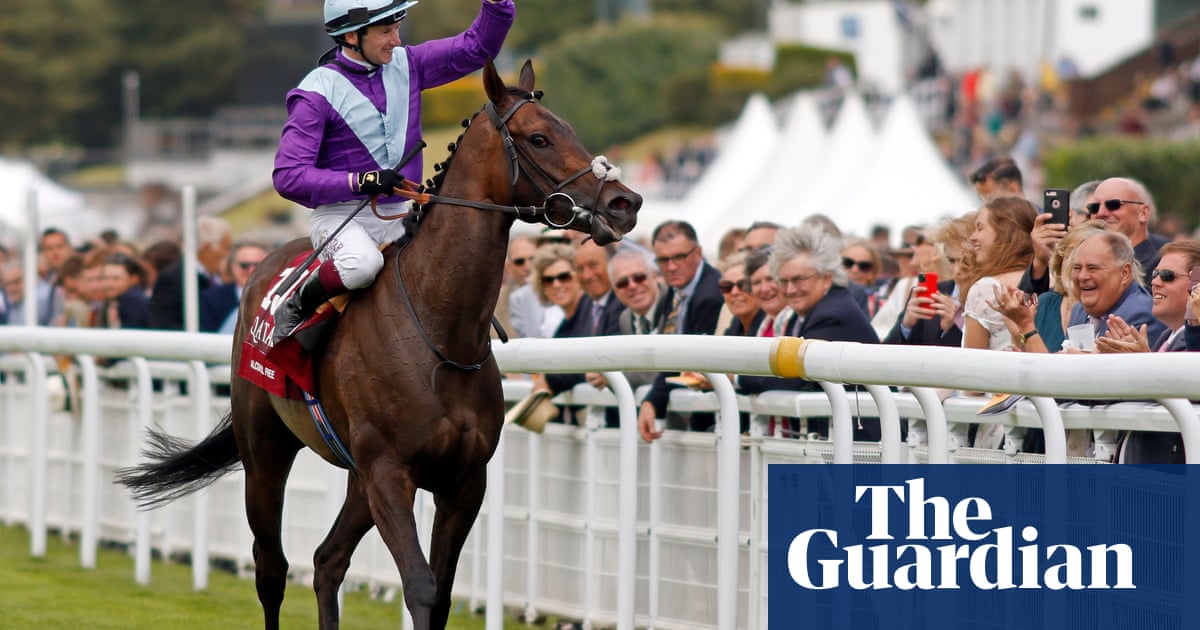 Just three trainers have won the British Flat racing championship for the first time in the past 25 years, but there is increasing chance that another chair will be required at the sport’s top table after Andrew Balding’s filly Alcohol Free stormed past Poetic Flare, the favourite, in the final furlong to win the Group One Sussex Stakes here on Wednesday.

Balding is enjoying his best season since taking over the licence at from his father, Ian, in 2003, at the famous Kingsclere Stables near Watership Down where Mill Reef was prepared to win the Derby and Prix de l’Arc de Triomphe in 1971. That was the season in which Ian Balding won his only trainers’ title. Half a century later his son is now neck-and-neck with Charlie Appleby at the top of the table having banked just over half a million pounds with this success on Wednesday.

Balding and Appleby, who is also chasing a first title, have both now passed £2.6m in prize money this season. Aidan O’Brien and John Gosden, with 10 championships between them, are at least £400,000 adrift and, while there are many big prizes still to come, Alcohol Free for one is likely to keep the meter ticking over in the final months of the campaign.

The race on Wednesday race was Alcohol Free’s fourth start in a Group One since early May and her second win, in her first race outside races restricted to her own sex. Poetic Flare, the 2,000 Guineas and St James’s Palace Stakes winner, was an obvious favourite to follow up a dominant win at the Royal meeting, but the ground was much faster on the opening day at Ascot and Alcohol Free, who landed the Coronation Stakes on soft ground three days later, was also popular with the punters at 7-2.

Poetic Flare and Kevin Manning made the first move in the straight, briefly carving out a narrow lead approaching the furlong pole. Oisin Murphy and Alcohol Free were alongside soon afterwards, however, and stayed on much better than the favourite in the final half-furlong to win by a length-and-three-quarters.

Jeff Smith, a veteran owner at Kingsclere, last saw his colours carried to victory in this race 37 years ago aboard Chief Singer. “I had jet-black hair and no worries in the world,” he said. “I thought it was easy and that I’d come back and do it again. She’s something else and the way she has won is incredible.

“It wasn’t so much the opposition, I was more concerned that we did not have a repeat of the Falmouth [at Newmarket in early July] where she got left in the lead having broken too well. She needs to get cover and something to aim at. Then she got bumped around and pushed back, but then the way she picked up showed what she really is.”

Having won nearly £900,000 for her connections already this season, Alcohol Free may now attempt to take her total to around £1.5m with a run in the Juddmonte International Stakes at York next month. Smith won the same race with The Queen Elizabeth II Stakes on Champions Day in October, another race with a seven-figure prize fund, is also a likely target later in the year.

“It was Jeff’s idea in the first place, and I don’t think it’s a bad idea, to put her in the International at York and we decided to keep her in at yesterday’s forfeit stage,” Balding said.

“It might be asking a bit much, going a mile-and-a-quarter, but she’s a filly that has won three Group One races, so we have very little to lose. If it doesn’t work, we’ll regroup and go back to the mile race on Champions Day.”

A small but select field goes to post for the Group One Nassau Stakes at Glorious Goodwood on Thursday, including two of 2021’s Classic winners – Joan Of Arc and Empress Josephine – and last year’s Breeders’ Cup Filly & Mare Turf winner in Audarya.

Lady Bowthorpe, who reduced her trainer William Jarvis to tears when she found trouble in running before finishing fourth in the Falmouth last time, is another big runner.

At the prices, though, Empress Josephine must be worth an interest at around 10-1. She needs to be forgiven a below-par run in the Coronation Stakes at Royal Ascot, but she short-headed Joan Of Arc in the Irish 1,000 Guineas before that and as a full sister to Minding should improve further for the step up to 10 furlongs.

Goodwood 1.50 Probable front-runner Mr Excellency has picked up a handy draw in stall four and Hollie Doyle, who made all the running to win on Mark Johnston’s colt at Newmarket in June, is back in the saddle. The omens are good for a big run at around 11-1.

Goodwood 2.25 Alan King saddled his first Group One winner on Tuesday’s card and he could get his first juvenile Group-race success on the board here with Asymmetric. He lost his unbeaten record when second to Lusail in the July Stakes last time but was only a head behind the winner in a race that was run in a strong time.

Goodwood 3.00 Wordsworth, the likely favourite, has been placed at Group One level behind Hurricane Lane on his last two starts but was at least half a dozen lengths off the winner on both occasions and he still has just a single maiden success to his name. At the early prices, Third Realm makes more appeal at around 4-1 to regain the winning thread, having beaten Adayar, the Derby winner, on soft ground at Lingfield in May before finishing 11 lengths fifth at Epsom.

Goodwood 4.10 Easier ground is an unknown for Mayfair Stroll but it was drying steadily on Wednesday and her four-length success on her nursery debut at Lingfield last week makes her a big player at around 8-1 under a 6lb penalty.